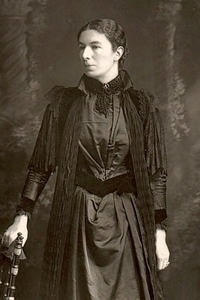 Mary Augusta Ward was a British novelist who wrote under her married name as Mrs Humphry Ward. She began her career writing articles for Macmillan’s Magazine while working on a book for children, Milly and Olly. This was followed by a more ambitious, though slight, study of modern life, Miss Bretherton, the story of an actress. Ward’s novels contained strong religious subject matter relevant to Victorian values she herself practised. Her popularity spread beyond Great Britain to the United States. Her book Lady Rose’s Daughter was the best-selling novel in the United States, as was The Marriage of William Ashe. Ward’s most popular novel by far was the religious “novel with a purpose” Robert Elsmere.

How a conservative English landowner became a patriotic citizen, glad to take his part in the war, through tribulation and sorrow and the diplomatic man...read more »

That is the question which Mrs. Ward, replying to some doubts and queries of an American friend, has undertaken to answer in this series of letters, and...read more »

It is a bold thing, I fear, to offer the public yet more letters based on a journey through the battle-fields of France-especially at a moment when impr...read more »

Mrs. Humphry Ward tells the story of a pretty, clinging Englishwoman, who learns through the war’s hard lesson the essential dishonesty of clinging. Wor...read more »

This volume is, in a sense, a sequel to England’s Effort – one of the most successful of all war books. It is, in fact, a graphic revelation of the veri...read more »