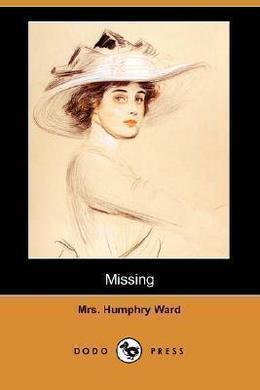 Mrs. Humphry Ward tells the story of a pretty, clinging Englishwoman, who learns through the war’s hard lesson the essential dishonesty of clinging. Work brings her spiritual freedom, as it has brought spiritual freedom to hundreds of women since the beginning of the war. Missing might be a contribution to the contemporary literature about woman, as vital in its way as ‘A Woman of Genius,’ but, like most of Mrs. Ward’s work, it lacks reality. It is a cleverly staged, well-managed drama of the Pinero type. You look on, are interested, entertained, but never for a moment carried away. It is all a play. It might have happened, you are willing to admit, but that these very clever ladies and gentlemen are living it, not acting it that is too great a demand upon your credulity. Mrs. Ward can produce polished drama; but she cannot reproduce life.

Miss Cookson turned from the window.

‘Yes–bring it up–except the tea of course–they ought to be here at any time.’

‘And Mrs. Weston wants to know what time supper’s to be?’

The fair-haired girl speaking was clearly north-country. She pronounced the ‘u’ in ‘supper,’ as though it were the German ‘u’ in Suppe.

The tone was sharp and off-hand. And the maid-servant, as she went downstairs, decided for the twentieth time that afternoon, that she didn’t like Miss Cookson, and she hoped her sister, Mrs. Sarratt, would be nicer. Miss Cookson had been poking her nose into everything that afternoon, fiddling with the rooms and furniture, and interfering with Mrs. Weston. As if Mrs. Weston didn’t know what to order for lodgers, and how to make them comfortable! As if she hadn’t had dozens of brides and bridegrooms to look after before this!–and if she hadn’t given them all satisfaction, would they ever have sent her all them picture-postcards which decorated her little parlour downstairs?

All the same, the house-parlourmaid, Milly by name, was a good deal excited about this particular couple who were now expected. For Mrs. Weston had told her it had been a ‘war wedding,’ and the bridegroom was going off to the front in a week. Milly’s own private affairs–in connection with a good-looking fellow, formerly a gardener at Bowness, now recently enlisted in one of the Border regiments–had caused her to take a special interest in the information, and had perhaps led her to put a bunch of monthly roses on Mrs. Sarratt’s dressing-table. Miss Cookson hadn’t bothered herself about flowers. That she might have done!–instead of fussing over things that didn’t concern her–just for the sake of ordering people about.

When the little red-haired maid had left the room, the lady she disliked returned to the window, and stood there absorbed in reflections that were not gay, to judge from the furrowed brow and pinched lips that accompanied them. Bridget Cookson was about thirty; not precisely handsome, but at the same time, not ill-looking. Her eyes were large and striking, and she had masses of dark hair, tightly coiled about her head as though its owner felt it troublesome and in the way. She was thin, but rather largely built, and her movements were quick and decided. Her tweed dress was fashionably cut, but severely without small ornament of any kind.

She looked out upon a beautiful corner of English Lakeland. The house in which she stood was built on the side of a little river, which, as she saw it, came flashing and sparkling out of a lake beyond, lying in broad strips of light and shade amid green surrounding fells. The sun was slipping low, and would soon have kindled all the lake into a white fire, in which its islands would have almost disappeared. But, for the moment, everything was plain:–the sky, full of light, and filmy grey cloud, the fells with their mingling of wood and purple crag, the shallow reach of the river beyond the garden, with a little family of wild duck floating upon it, and just below her a vivid splash of colour, a mass of rhododendron in bloom, setting its rose-pink challenge against the cool greys and greens of the fell.

But Bridget Cookson was not admiring the view. It was not new to her, and moreover she was not in love with Westmorland at all; and why Nelly should have chosen this particular spot, to live in, while George was at the war, she did not understand. She believed there was some sentimental reason. They had first seen him in the Lakes–just before the war–when they two girls and their father were staying actually in this very lodging-house. But sentimental reasons are nothing.

Well, the thing was done. Nelly was married, and in another week, George would be at the front. Perhaps in a fortnight’s time she would be a widow. Such things have happened often. ‘And then what shall I do with her?’ thought the sister, irritably,–recoiling from a sudden vision of Nelly in sorrow, which seemed to threaten her own life with even greater dislocation than had happened to it already. ‘I must have my time to myself!–freedom for what I want’–she thought to herself, impatiently, ‘I can’t be always looking after her.’