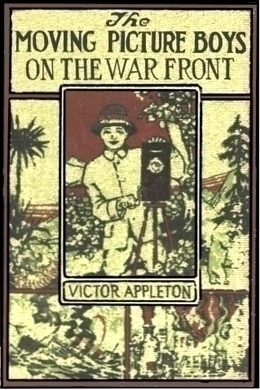 The Moving Picture Boys on the War Front

The Hunt for the Stolen Army Films

Moving pictures and photo plays are famous the world over, and in this line of books the reader is given a full description of how the films are made–the scenes of little dramas, indoors and out, trick pictures to satisfy the curious, soul-stirringpictures of city affairs, life in the Wild West, among the cowboys and Indians, thrilling rescues along the seacoast, the daring of picture hunters in the jungle among savage beasts, and the great risks run in picturing conditions in a land of earthquakes.

“Come on now, ready with those smoke bombs! Where’s the Confederate army, anyhow? And you Unionists, don’t look as though you were going to rob an apple orchard! Suffering snakes, you’re going into battle and you’re going to lick the boots off the Johnnie Rebs! Look the part! Look the part! Now, then, what about the cannon? Got plenty of powder in ‘em so there’ll be lots of smoke?”

A stout man, with perspiration running down his face, one drop trickling from his nose, was hurrying up and down the field.

On one side of him was a small army composed of what seemed to be Civil War Union soldiers. A little farther back was a motley array of Confederates. Farther off was an apple orchard, and close beside that stood a ramshackle farmhouse which was soon to be the center of a desperate moving-picture battle in the course of which the house would be the refuge of the Confederates.

“The old man is sort of on his ear this morning, isn’t he, Blake?” asked Joe Duncan of his chum and camera partner, Blake Stewart. “I haven’t heard him rage like this since the time C. C. dodged the custard pie he was supposed to take broadside on.”

“Nervous isn’t the word for it, Blake. He’s boiling over! What’s it all about, anyhow? Is he mad because I was a bit late getting here with the extra reels of film?”

“No, he didn’t say a word about that. It’s just that he can’t get this battle scene to suit him. We’ve rehearsed it and rehearsed it again and again, but each time it seems to go worse. The extras don’t seem to know how to fight.”

“That’s queer, considering all the war preparations that have been going on here since we got in the game against Germany,” observed Joe Duncan, as he made some adjustments to his camera, one of several which he and Blake would use in filming part of a big serial, a number of scenes of which were to center around the battle in the apple orchard. “With all the volunteering and drafting that’s been going on, soldiers quartered all over and as thick as bees around the cities, you’d think these extra fellows would know something about the game, wouldn’t you?”

“You’d think so; but they seem to be afraid of the guns, even though they are loaded with blanks. Here comes Mr. Hadley again, and he’s got fire in his eyes!”

Mr. Hadley, producer of the Consolidated Film Company, approached Jacob Ringold, a theatrical manager who was in charge of the company taking the parts in “The Dividing Line,” which was the name of the Civil War play.

“Look here, Jake!” exclaimed Mr. Hadley, “is this supposed to be a desperate, bloody battle, or a game of tennis?”

“Well, I’m glad to know it! From the way most of your people just rehearsed it, I thought I might be in the wrong box, and looking at a college football game. But no, I wrong the college game! That would be more strenuous than this battle scene, at least as far as I’ve watched it. Can’t you get a little more life into your people?”

“I’ll try, Mr. Hadley,” answered the manager, as the producer walked over to the two boys who stood near their cameras waiting for the word to be given, when they would begin grinding out the long reels of celluloid film.

“This is positively the worst production I’ve ever been in!” complained Mr. Hadley to Blake. “Did you ever see such a farce as when the Confederates were hidden in the orchard and the Unionists stormed over the stone wall? You’d think they were a lot of boys going after apples. Bah! It makes me weary!”

“Mr. Ringold’s talking to them now like a Dutch uncle,” observed Joe, as he idly swung the crank of his camera, the machine not being in gear.

“Well, I hope it does some good,” observed the producer. “If it isn’t better pretty soon, I’ll let all these extra men go and hire others myself. I want that battle scene to look halfway real, at least.”

“It’ll be a failure, I know it will,” observed a melancholy-looking man who strolled up at this juncture. “I saw a black cat as I came from my room this morning, and that’s always a sign of bad luck.”

“Oh, leave it to you to find something wrong!” exploded Mr. Hadley. “Can’t you look on the cheerful side once in a while, C. C.?” he asked, forgetting that he, himself, had been prophetic of failure but a few moments before.

“Humph!” murmured C. C., otherwise Christopher Cutler Piper, a comedian by profession and a gloom-producer by choice, “you might have known those fellows couldn’t act after you’d had one look at ‘em,” and he motioned to the mobs of extra men, part of whom formed the Confederate and the other half the Union armies. “There isn’t a man among them who has ever played Macbeth.”

“If they had, and they let it affect them as it does you, I’d fire them on the spot!” laughed Mr. Hadley; and at this, his first sign of mirth that day, Blake, Joe and some of the others smiled.