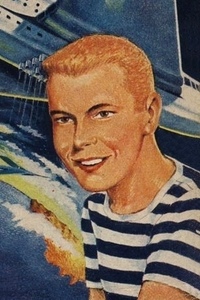 Stratemeyer’s business acumen was in realizing that there was a huge, untapped market for children’s books. At a time when most children’s books were aimed at moral instruction, the Syndicate specialized in producing books that were meant primarily to be entertaining. In founding the Stratemeyer Syndicate, Edward Stratemeyer aimed to produce books in an efficient, assembly-line fashion and to write them in such a way as to maximize their popularity, which they did with great success.

The Moving Picture Boys on the War Front (1918)

Moving pictures and photo plays are famous the world over, and in this line of books the reader is given a full description of how the films are made–th...read more »

Tom Swift Among the Diamond Makers (1911)

While young Tom Swift is in a jewelry store shopping for a ring for Mary, he meets a man who claims to be willing to teach Tom how to make diamonds. Lat...read more »

Tom tries, with mixed success, to get someone to go along with him and try out an airplane that he had recently been working on. After getting off to a ...read more »

Tom Swift has finished his latest invention: the Red Cloud, a fast and innovative airship and he’s anxious for a cross-country trial. But just before he...read more »

Tom is daydreaming of African Safaris while test-firing his new Electric Rifle. It works too well and toasts a hole in his neighbor’s dining room wall, ...read more »

Tom Swift and his Electric Runabout (1910)

Tom Swift enters an upcoming race with his specially-designed prototype electric race car, but as he makes the final preparations and adjustments, days ...read more »

Tom Swift’s father, a world famous scientist, has been robbed of one of his greatest inventions, and it’s up to Tom to bring the criminals to justice wi...read more »

Tom Swift, in his first adventure, has purchased a motorcycle and immediately gets busy modifying it. Eager to test his enhancements, Tom volunteers to ...read more »

A $10,000 prize lures Tom into competing at a local aviation meet at Eagle Park. Tom is determined to build the fastest plane around, but his plans myst...read more »

Tom Swift’s father has completed an experimental submarine design that he expects to test in an upcoming government sponsored race and trial. However, w...read more »

Tom Swift and his Wireless Message (1911)

Tom Swift and his friends decide to trial an experimental airship near the New Jersey coast, and are unexpectedly swept out to sea by hurricane winds. U...read more »

Tom Swift &amp; friends journey to the Arctic in his custom airship to seek for the legendary Valley of Gold. When his map is stolen by his longtime nem...read more »

High-spirited young Tom Swift is off on another of his many exciting adventures. This time he’s in search of gold in an underground lost city. Tom finds...read more »