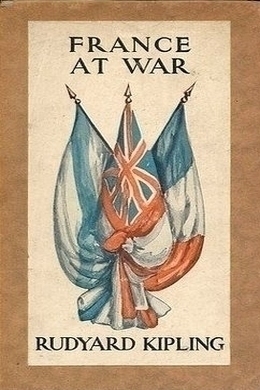 On the Frontier of Civilization

Kipling was reported missing, believed killed, in his first battle on the Western Front. From this time he was constantly in pain from a gastric ulcer. He published some (censored) articles of war journalism in 1915, collected as The New Army in Training and France at War.

“It’s a pretty park,” said the French artillery officer. “We’ve done a lot for it since the owner left. I hope he’ll appreciate it when he comes back.”

The car traversed a winding drive through woods, between banks embellished with little chalets of a rustic nature. At first, the chalets stood their full height above ground, suggesting tea-gardens in England. Further on they sank into the earth till, at the top of the ascent, only their solid brown roofs showed. Torn branches drooping across the driveway, with here and there a scorched patch of undergrowth, explained the reason of their modesty.

The chateau that commanded these glories of forest and park sat boldly on a terrace. There was nothing wrong with it except, if one looked closely, a few scratches or dints on its white stone walls, or a neatly drilled hole under a flight of steps. One such hole ended in an unexploded shell. “Yes,” said the officer. “They arrive here occasionally.”

Something bellowed across the folds of the wooded hills; something grunted in reply. Something passed overhead, querulously but not without dignity. Two clear fresh barks joined the chorus, and a man moved lazily in the direction of the guns.

“Well. Suppose we come and look at things a little,” said the commanding officer.

There was a specimen tree–a tree worthy of such a park–the sort of tree visitors are always taken to admire. A ladder ran up it to a platform. What little wind there was swayed the tall top, and the ladder creaked like a ship’s gangway. A telephone bell tinkled 50 foot overhead. Two invisible guns spoke fervently for half a minute, and broke off like terriers choked on a leash. We climbed till the topmost platform swayed sicklily beneath us. Here one found a rustic shelter, always of the tea-garden pattern, a table, a map, and a little window wreathed with living branches that gave one the first view of the Devil and all his works. It was a stretch of open country, with a few sticks like old tooth-brushes which had once been trees round a farm. The rest was yellow grass, barren to all appearance as the veldt.

“The grass is yellow because they have used gas here,” said an officer. “Their trenches are——. You can see for yourself.”

The guns in the woods began again. They seemed to have no relation to the regularly spaced bursts of smoke along a little smear in the desert earth two thousand yards away–no connection at all with the strong voices overhead coming and going. It was as impersonal as the drive of the sea along a breakwater.

Thus it went: a pause–a gathering of sound like the race of an incoming wave; then the high-flung heads of breakers spouting white up the face of a groyne. Suddenly, a seventh wave broke and spread the shape of its foam like a plume overtopping all the others.

“That’s one of our torpilleurs–what you call trench-sweepers,” said the observer among the whispering leaves.

Some one crossed the platform to consult the map with its ranges. A blistering outbreak of white smokes rose a little beyond the large plume. It was as though the tide had struck a reef out yonder.

Then a new voice of tremendous volume lifted itself out of a lull that followed. Somebody laughed. Evidently the voice was known.

“That is not for us,” a gunner said. “They are being waked up from——” he named a distant French position. “So and so is attending to them there. We go on with our usual work. Look! Another torpilleur.”

Again a big plume rose; and again the lighter shells broke at their appointed distance beyond it. The smoke died away on that stretch of trench, as the foam of a swell dies in the angle of a harbour wall, and broke out afresh half a mile lower down. In its apparent laziness, in its awful deliberation, and its quick spasms of wrath, it was more like the work of waves than of men; and our high platform’s gentle sway and glide was exactly the motion of a ship drifting with us toward that shore.

“The usual work. Only the usual work,” the officer explained. “Sometimes it is here. Sometimes above or below us. I have been here since May.”

A little sunshine flooded the stricken landscape and made its chemical yellow look more foul. A detachment of men moved out on a road which ran toward the French trenches, and then vanished at the foot of a little rise. Other men appeared moving toward us with that concentration of purpose and bearing shown in both Armies when–dinner is at hand. They looked like people who had been digging hard.

“The same work. Always the same work!” the officer said. “And you could walk from here to the sea or to Switzerland in that ditch–and you’ll find the same work going on everywhere. It isn’t war.”