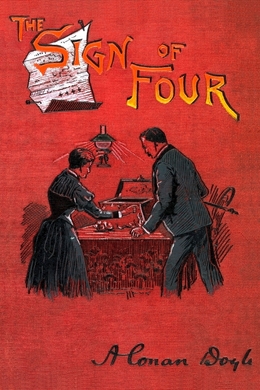 When an Englishwoman receives mysterious gifts of pearls and a letter promising to right wrongs done to her, she calls upon Sherlock Holmes and Dr. Watson to investigate. Who is sending the beautiful Miss Morstan a rare and priceless pearl each year? Holmes and Watson pursue Indian treasures, and murders whose ominous trademark is “the sign of four”. It is in this, the second Holmes novel that the great detective fully comes to life ―as a melancholic and an inscrutable master of deduction.

Sherlock Holmes took his bottle from the corner of the mantel-piece and his hypodermic syringe from its neat morocco case. With his long, white, nervous fingers he adjusted the delicate needle, and rolled back his left shirt-cuff. For some little time his eyes rested thoughtfully upon the sinewy forearm and wrist all dotted and scarred with innumerable puncture-marks. Finally he thrust the sharp point home, pressed down the tiny piston, and sank back into the velvet-lined arm-chair with a long sigh of satisfaction.

Three times a day for many months I had witnessed this performance, but custom had not reconciled my mind to it. On the contrary, from day to day I had become more irritable at the sight, and my conscience swelled nightly within me at the thought that I had lacked the courage to protest. Again and again I had registered a vow that I should deliver my soul upon the subject, but there was that in the cool, nonchalant air of my companion which made him the last man with whom one would care to take anything approaching to a liberty. His great powers, his masterly manner, and the experience which I had had of his many extraordinary qualities, all made me diffident and backward in crossing him.

Yet upon that afternoon, whether it was the Beaune which I had taken with my lunch, or the additional exasperation produced by the extreme deliberation of his manner, I suddenly felt that I could hold out no longer.

He raised his eyes languidly from the old black-letter volume which he had opened. “It is cocaine,” he said,–“a seven-per-cent. solution. Would you care to try it?”

“No, indeed,” I answered, brusquely. “My constitution has not got over the Afghan campaign yet. I cannot afford to throw any extra strain upon it.”

He smiled at my vehemence. “Perhaps you are right, Watson,” he said. “I suppose that its influence is physically a bad one. I find it, however, so transcendently stimulating and clarifying to the mind that its secondary action is a matter of small moment.”

“But consider!” I said, earnestly. “Count the cost! Your brain may, as you say, be roused and excited, but it is a pathological and morbid process, which involves increased tissue-change and may at last leave a permanent weakness. You know, too, what a black reaction comes upon you. Surely the game is hardly worth the candle. Why should you, for a mere passing pleasure, risk the loss of those great powers with which you have been endowed? Remember that I speak not only as one comrade to another, but as a medical man to one for whose constitution he is to some extent answerable.”

He did not seem offended. On the contrary, he put his finger-tips together and leaned his elbows on the arms of his chair, like one who has a relish for conversation.

“My mind,” he said, “rebels at stagnation. Give me problems, give me work, give me the most abstruse cryptogram or the most intricate analysis, and I am in my own proper atmosphere. I can dispense then with artificial stimulants. But I abhor the dull routine of existence. I crave for mental exaltation. That is why I have chosen my own particular profession,–or rather created it, for I am the only one in the world.”

“The only unofficial detective?” I said, raising my eyebrows.

“The only unofficial consulting detective,” he answered. “I am the last and highest court of appeal in detection. When Gregson or Lestrade or Athelney Jones are out of their depths–which, by the way, is their normal state–the matter is laid before me. I examine the data, as an expert, and pronounce a specialist’s opinion. I claim no credit in such cases. My name figures in no newspaper. The work itself, the pleasure of finding a field for my peculiar powers, is my highest reward. But you have yourself had some experience of my methods of work in the Jefferson Hope case.”

“Yes, indeed,” said I, cordially. “I was never so struck by anything in my life. I even embodied it in a small brochure with the somewhat fantastic title of ‘A Study in Scarlet.’”

He shook his head sadly. “I glanced over it,” said he. “Honestly, I cannot congratulate you upon it. Detection is, or ought to be, an exact science, and should be treated in the same cold and unemotional manner. You have attempted to tinge it with romanticism, which produces much the same effect as if you worked a love-story or an elopement into the fifth proposition of Euclid.”

“But the romance was there,” I remonstrated. “I could not tamper with the facts.”

“Some facts should be suppressed, or at least a just sense of proportion should be observed in treating them. The only point in the case which deserved mention was the curious analytical reasoning from effects to causes by which I succeeded in unraveling it.”