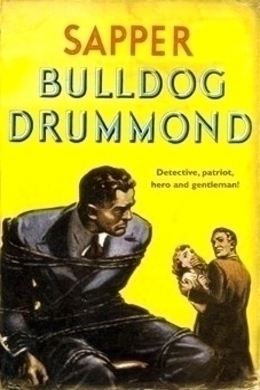 Hugh “Bulldog” Drummond, wealthy former officer of the Loamshire Regiment, dashing and strong (but not particularly handsome), places an advertisement in The Times expressing his desire for an adventure – which arrives in the form of a reply from a young woman concerned for her father. Blackmailers, communist conspiracy, and foreign paymasters of the arch-villain Carl Peterson are encountered and lead to more adventure than Drummond ever dreamed of!

Captain Hugh Drummond, D.S.O., M.C., late of His Majesty’s Royal Loamshires, was whistling in his morning bath. Being by nature of a cheerful disposition, the symptom did not surprise his servant, late private of the same famous regiment, who was laying breakfast in an adjoining room.

After a while the whistling ceased, and the musical gurgle of escaping water announced that the concert was over. It was the signal for James Denny—the square-jawed ex-batman—to disappear into the back regions and get from his wife the kidneys and bacon which that most excellent woman had grilled to a turn. But on this particular morning the invariable routine was broken. James Denny seemed preoccupied, distrait.

Once or twice he scratched his head, and stared out of the window with a puzzled frown. And each time, after a brief survey of the other side of Half Moon Street, he turned back again to the breakfast table with a grin.

‘What’s you looking for, James Denny?’ The irate voice of his wife at the door made him turn round guiltily. ‘Them kidneys is ready and waiting these five minutes.’

Her eyes fell on the table, and she advanced into the room wiping her hands on her apron.

‘Did you ever see such a bunch of letters?’ she said.

‘Forty-five,’ returned her husband grimly, ‘and more to come.’ He picked up the newspaper lying beside the chair and opened it out.

‘Them’s the result of that,’ he continued cryptically, indicating a paragraph with a square finger, and thrusting the paper under his wife’s nose.

…’Demobilised officer,’ she read slowly, ‘finding peace incredibly tedious, would welcome diversion. Legitimate, if possible; but crime, if of a comparatively humorous description, no objection. Excitement essential. Would be prepared to consider permanent job if suitably impressed by applicant for his services. Reply at once Box X10.’

She pushed down the paper on a chair and stared first at her husband, and then at the rows of letters neatly arranged on the table.

‘I calls it wicked,’ she announced at length. ‘Fair flying in the face of Providence. Crime, Denny—crime. Don’t you get ‘axing nothing to do with such mad pranks, my man, or you and me will be having words.’ She shook an admonitory finger at him, and retired slowly to the kitchen. In the days of his youth, James Denny had been a bit wild, and there was a look in his eyes this morning—the suspicion of a glint—which recalled old memories.

A moment or two later Hugh Drummond came in. Slightly under six feet in height, he was broad in proportion. His best friend would not have called him good-looking, but he was the fortunate possessor of that cheerful type of ugliness which inspires immediate confidence in its owner. His nose had never quite recovered from the final one year in the Public Schools Heavy Weights; his mouth was not small. In fact, to be strictly accurate only his eyes redeemed his face from being what is known in the vernacular as the Frozen Limit.

Deep-set and steady, with eyelashes that many a woman had envied, they showed the man for what he was—a sportsman and a gentleman. And the combination of the two is an unbeatable production.

He paused as he got to the table, and glanced at the rows of letters. His servant, pretending to busy himself at the other end of the room, was watching him surreptitiously, and noted the grin which slowly spread over Drummond’s face as he picked up two or three and examined the envelopes.

‘Who would have thought it, James?’ he remarked at length. ‘Great Scot! I shall have to get a partner.’

With disapproval showing in every line of her face, Mrs. Denny entered the room, carrying the kidneys, and Drummond glanced at her with a smile.

‘Good morning, Mrs. Denny,’ he said. ‘Wherefore this worried look on your face? Has that reprobate James been misbehaving himself?’

The worthy woman snorted. ‘He has not, sir—not yet, leastwise. And if so be that he does’—her eyes travelled up and down the back of the hapless Denny, who was quite unnecessarily pulling books off shelves and putting them back again—’ if so be that he does,’ she continued grimly, ‘him and me will have words—as I’ve told him already this morning.’ She stalked from the room, after staring pointedly at the letters in Drummond’s hand, and the two men looked at one another.

‘It’s that there reference to crime, sir, that’s torn it,’ said Denny in a hoarse whisper.

‘Thinks I’m going to lead you astray, does she, James?’