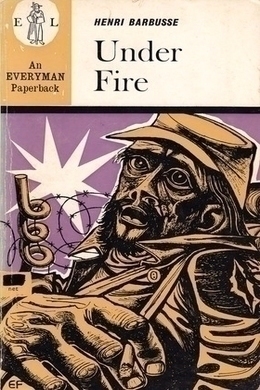 The Story of a Squad

This book follows a squad of French volunteer soldiers on the front in France after the German invasion. The book opens and ends with broad visions shared by multiple characters. The anecdotes are episodic in nature, each with an individual chapter title. In contrast to many war novels which came before it, Under Fire describes war in gritty and brutal realism. A powerful and earnest portrayal of life at the frontline during World War I. Berbusse’s depiction of the horrors and tragedies of war is staggeringly realistic. He draws the reader’s attention to the appalling conditions in which soldiers lived and fought through various anecdotes. Highly perceptive and thought-provoking!

Mont Blanc, the Dent du Midi, and the Aiguille Verte look across at the bloodless faces that show above the blankets along the gallery of the sanatorium. This roofed-in gallery of rustic wood-work on the first floor of the palatial hospital is isolated in Space and overlooks the world. The blankets of fine wool–red, green, brown, or white–from which those wasted cheeks and shining eyes protrude are quite still. No sound comes from the long couches except when some one coughs, or that of the pages of a book turned over at long and regular intervals, or the undertone of question and quiet answer between neighbors, or now and again the crescendo disturbance of a daring crow, escaped to the balcony from those flocks that seem threaded across the immense transparency like chaplets of black pearls.

Silence is obligatory. Besides, the rich and high-placed who have come here from all the ends of the earth, smitten by the same evil, have lost the habit of talking. They have withdrawn into themselves, to think of their life and of their death.

A servant appears in the balcony, dressed in white and walking softly. She brings newspapers and hands them about.

“It’s decided,” says the first to unfold his paper. “War is declared.”

Expected as the news is, its effect is almost dazing, for this audience feels that its portent is without measure or limit. These men of culture and intelligence, detached from the affairs of the world and almost from the world itself, whose faculties are deepened by suffering and meditation, as far remote from their fellow men as if they were already of the Future–these men look deeply into the distance, towards the unknowable land of the living and the insane.

“Austria’s act is a crime,” says the Austrian.

“France must win,” says the Englishman.

“I hope Germany will be beaten,” says the German.

They settle down again under the blankets and on the pillows, looking to heaven and the high peaks. But in spite of that vast purity, the silence is filled with the dire disclosure of a moment before.

Some of the invalids break the silence, and say the word again under their breath, reflecting that this is the greatest happening of the age, and perhaps of all ages. Even on the lucid landscape at which they gaze the news casts something like a vague and somber mirage.

The tranquil expanses of the valley, adorned with soft and smooth pastures and hamlets rosy as the rose, with the sable shadow-stains of the majestic mountains and the black lace and white of pines and eternal snow, become alive with the movements of men, whose multitudes swarm in distinct masses. Attacks develop, wave by wave, across the fields and then stand still. Houses are eviscerated like human beings and towns like houses. Villages appear in crumpled whiteness as though fallen from heaven to earth. The very shape of the plain is changed by the frightful heaps of wounded and slain.

Each country whose frontiers are consumed by carnage is seen tearing from its heart ever more warriors of full blood and force. One’s eyes follow the flow of these living tributaries to the River of Death. To north and south and west ajar there are battles on every side. Turn where you will, there is war in every corner of that vastness.

One of the pale-faced clairvoyants lifts himself on his elbow, reckons and numbers the fighters present and to come–thirty millions of soldiers. Another stammers, his eyes full of slaughter, “Two armies at death-grips–that is one great army committing suicide.”

“It should not have been,” says the deep and hollow voice of the first in the line. But another says, “It is the French Revolution beginning again.” “Let thrones beware!” says another’s undertone.

The third adds, “Perhaps it is the last war of all.” A silence follows, then some heads are shaken in dissent whose faces have been blanched anew by the stale tragedy of sleepless night–“Stop war? Stop war? Impossible! There is no cure for the world’s disease.”

Some one coughs, and then the Vision is swallowed up in the huge sunlit peace of the lush meadows. In the rich colors of the glowing kine, the black forests, the green fields and the blue distance, dies the reflection of the fire where the old world burns and breaks. Infinite silence engulfs the uproar of hate and pain from the dark swarmings of mankind. They who have spoken retire one by one within themselves, absorbed once more in their own mysterious malady.

But when evening is ready to descend within the valley, a storm breaks over the mass of Mont Blanc. One may not go forth in such peril, for the last waves of the storm-wind roll even to the great veranda, to that harbor where they have taken refuge; and these victims of a great internal wound encompass with their gaze the elemental convulsion.