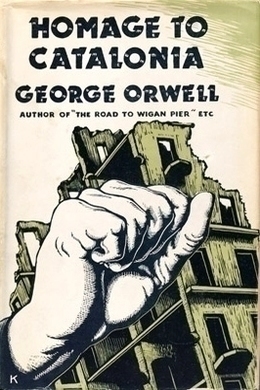 “Every line of serious work that I have written since 1936 has been written, directly or indirectly, against totalitarianism and for democratic socialism as I understand it.” Thus wrote Orwell following his experiences as a militiaman in the Spanish Civil War, chronicled in Homage to Catalonia. Here he brings to bear all the force of his humanity, passion and clarity, describing with bitter intensity the bright hopes and cynical betrayals of that chaotic episode.

In the Lenin Barracks in Barcelona, the day before I joined the militia, I saw an Italian militiaman standing in front of the officers’ table.

He was a tough-looking youth of twenty-five or six, with reddish-yellow hair and powerful shoulders. His peaked leather cap was pulled fiercely over one eye. He was standing in profile to me, his chin on his breast, gazing with a puzzled frown at a map which one of the officers had open on the table. Something in his face deeply moved me. It was the face of a man who would commit murder and throw away his life for a friend–the kind of face you would expect in an Anarchist, though as likely as not he was a Communist. There were both candour and ferocity in it; also the pathetic reverence that illiterate people have for their supposed superiors. Obviously he could not make head or tail of the map; obviously he regarded map-reading as a stupendous intellectual feat. I hardly know why, but I have seldom seen anyone–any man, I mean–to whom I have taken such an immediate liking. While they were talking round the table some remark brought it out that I was a foreigner. The Italian raised his head and said quickly:

As we went out he stepped across the room and gripped my hand very hard. Queer, the affection you can feel for a stranger! It was as though his spirit and mine had momentarily succeeded in bridging the gulf of language and tradition and meeting in utter intimacy. I hoped he liked me as well as I liked him. But I also knew that to retain my first impression of him I must not see him again; and needless to say I never did see him again. One was always making contacts of that kind in Spain.

I mention this Italian militiaman because he has stuck vividly in my memory. With his shabby uniform and fierce pathetic face he typifies for me the special atmosphere of that time. He is bound up with all my memories of that period of the war–the red flags in Barcelona, the gaunt trains full of shabby soldiers creeping to the front, the grey war-stricken towns farther up the line, the muddy, ice-cold trenches in the mountains.

This was in late December 1936, less than seven months ago as I write, and yet it is a period that has already receded into enormous distance. Later events have obliterated it much more completely than they have obliterated 1935, or 1905, for that matter. I had come to Spain with some notion of writing newspaper articles, but I had joined the militia almost immediately, because at that time and in that atmosphere it seemed the only conceivable thing to do. The Anarchists were still in virtual control of Catalonia and the revolution was still in full swing. To anyone who had been there since the beginning it probably seemed even in December or January that the revolutionary period was ending; but when one came straight from England the aspect of Barcelona was something startling and overwhelming. It was the first time that I had ever been in a town where the working class was in the saddle.