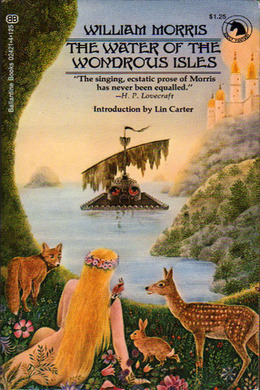 The Water of the Wondrous Isles

Drawing on medieval legend and age-old fantasy tropes, William Morris’ Water of the Wondrous Isles combines the best of both of these genres and updates them with an interesting thematic twist: the heroic figure who leads the quest is a plucky, spirited young girl. Fans of classic fantasy will relish this exquisitely wrought tale.

Whilom, as tells the tale, was a walled cheaping-town hight Utterhay, which was builded in a bight of the land a little off the great highway which went from over the mountains to the sea.

The said town was hard on the borders of a wood, which men held to be mighty great, or maybe measureless; though few indeed had entered it, and they that had, brought back tales wild and confused thereof.

Therein was neither highway nor byway, nor wood-reeve nor way-warden; never came chapman thence into Utterhay; no man of Utterhay was so poor or so bold that he durst raise the hunt therein; no outlaw durst flee thereto; no man of God had such trust in the saints that he durst build him a cell in that wood.

For all men deemed it more than perilous; and some said that there walked the worst of the dead; othersome that the Goddesses of the Gentiles haunted there; others again that it was the faery rather, but they full of malice and guile. But most commonly it was deemed that the devils swarmed amidst of its thickets, and that wheresoever a man sought to, who was once environed by it, ever it was the Gate of Hell whereto he came. And the said wood was called Evilshaw.

Nevertheless the cheaping-town throve not ill; for whatso evil things haunted Evilshaw, never came they into Utterhay in such guise that men knew them, neither wotted they of any hurt that they had of the Devils of Evilshaw.

Now in the said cheaping-town, on a day, it was market and high noon, and in the market-place was much people thronging; and amidst of them went a woman, tall, and strong of aspect, of some thirty winters by seeming, black-haired, hook-nosed and hawk-eyed, not so fair to look on as masterful and proud. She led a great grey ass betwixt two panniers, wherein she laded her marketings. But now she had done her chaffer, and was looking about her as if to note the folk for her disport; but when she came across a child, whether it were borne in arms or led by its kinswomen, or were going alone, as were some, she seemed more heedful of it, and eyed it more closely than aught else.

So she strolled about till she was come to the outskirts of the throng, and there she happened on a babe of some two winters, which was crawling about on its hands and knees, with scarce a rag upon its little body. She watched it, and looked whereto it was going, and saw a woman sitting on a stone, with none anigh her, her face bowed over her knees as if she were weary or sorry. Unto her crept the little one, murmuring and merry, and put its arms about the woman’s legs, and buried its face in the folds of her gown: she looked up therewith, and showed a face which had once been full fair, but was now grown bony and haggard, though she were scarce past five and twenty years. She took the child and strained it to her bosom, and kissed it, face and hands, and made it great cheer, but ever woefully. The tall stranger stood looking down on her, and noted how evilly she was clad, and how she seemed to have nought to do with that throng of thriving cheapeners, and she smiled somewhat sourly.

At last she spake, and her voice was not so harsh as might have been looked for from her face: Dame, she said, thou seemest to be less busy than most folk here; might I crave of thee to tell an alien who has but some hour to dwell in this good town where she may find her a chamber wherein to rest and eat a morsel, and be untroubled of ribalds and ill company? Said the poor-wife: Short shall be my tale; I am over poor to know of hostelries and ale-houses that I may tell thee aught thereof. Said the other: Maybe some neighbour of thine would take me in for thy sake? Said the mother: What neighbours have I since my man died; and I dying of hunger, and in this town of thrift and abundance?

The leader of the ass was silent a while, then she said: Poor woman! I begin to have pity on thee; and I tell thee that luck hath come to thee to-day.

Now the poor-wife had stood up with the babe in her arms and was turning to go her ways; but the alien put forth a hand to her, and said: Stand a while and hearken good tidings. And she put her hand to her girdle-pouch, and drew thereout a good golden piece, a noble, and said: When I am sitting down in thine house thou wilt have earned this, and when I take my soles out thereof there will be three more of like countenance, if I be content with thee meanwhile.

The woman looked on the gold, and tears came into her eyes; but she laughed and said: Houseroom may I give thee for an hour truly, and therewithal water of the well, and a mouse’s meal of bread. If thou deem that worth three nobles, how may I say thee nay, when they may save the life of my little one. But what else wouldst thou of me? Little enough, said the alien; so lead me straight to thine house.