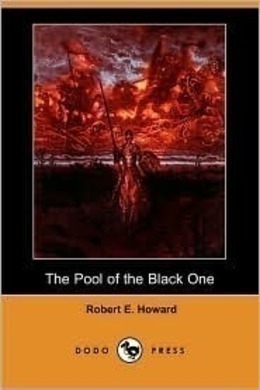 The Pool Of The Black One

The Pool of the Black One is one of the original short stories starring the sword and sorcery hero Conan the Cimmerian, written by American author Robert E. Howard. It is set in the pseudo-historical Hyborian Age and concerns Conan becoming the captain of a pirate vessel and encountering a remote island with a mysterious pool that has powers of transmutation.

Sancha, once of Kordava, yawned daintily, stretched her supple limbs luxuriously, and composed herself more comfortably on the ermine- fringed silk spread on the carrack’s poop-deck. That the crew watched her with burning interest from waist and forecastle, she was lazily aware, just as she was also aware that her short silk kirtle veiled little of her voluptuous contours from their eager eyes. Wherefore she smiled insolently and prepared to snatch a few more winks before the sun, which was just thrusting his golden disk above the ocean, should dazzle her eyes.

But at that instant a sound reached her ears unlike the creaking of timbers, thrum of cordage and lap of waves. She sat up, her gaze fixed on the rail, over which, to her amazement, a dripping figure clambered. Her dark eyes opened wide, her red lips parted in an O of surprize. The intruder was a stranger to her. Water ran in rivulets from his great shoulders and down his heavy arms. His single garment– a pair of bright crimson silk breeks–was soaking wet, as was his broad gold-buckled girdle and the sheathed sword it supported. As he stood at the rail, the rising sun etched him like a great bronze statue. He ran his fingers through his streaming black mane, and his blue eyes lit as they rested on the girl.

“Who are you?” she demanded. “Whence did you come?”

He made a gesture toward the sea that took in a whole quarter of the compass, while his eyes did not leave her supple figure.

“Are you a merman, that you rise up out of the sea?” she asked, confused by the candor of his gaze, though she was accustomed to admiration.

Before he could reply, a quick step sounded on the boards, and the master of the carrack was glaring at the stranger, fingers twitching at sword hilt.

“Who the devil are you, sirrah?” this one demanded in no friendly tone.

“I am Conan,” the other answered imperturbably. Sancha pricked up her ears anew; she had never heard Zingaran spoken with such an accent as the stranger spoke it.

“And how did you get aboard my ship?” The voice grated with suspicion.

“Swam!” exclaimed the master angrily. “Dog, would you jest with me? We are far beyond sight of land. Whence do you come?”

Conan pointed with a muscular brown arm toward the east, banded in dazzling gold by the lifting sun.

“I came from the Islands.”

“Oh!” The other regarded him with increased interest. Black brows drew down over scowling eyes, and the thin lip lifted unpleasantly.

“So you are one of those dogs of the Barachans.”

“And do you know who I am?” his questioner demanded.

“This ship is the Wastrel; so you must be Zaporavo.”

“Aye!” It touched the captain’s grim vanity that the man should know him. He was a tall man, tall as Conan, though of leaner build. Framed in his steel morion his face was dark, saturnine and hawklike, wherefore men called him the Hawk. His armor and garments were rich and ornate, after the fashion of a Zingaran grandee. His hand was never far from his sword hilt.

There was little favor in the gaze he bent on Conan. Little love was lost between Zingaran renegades and the outlaws who infested the Baracha Islands off the southern coast of Zingara. These men were mostly sailors from Argos, with a sprinkling of other nationalities. They raided the shipping, and harried the Zingaran coast towns, just as the Zingaran buccaneers did, but these dignified their profession by calling themselves Freebooters, while they dubbed the Barachans pirates. They were neither the first nor the last to gild the name of thief.

Some of these thoughts passed through Zaporavo’s mind as he toyed with his sword hilt and scowled at his uninvited guest. Conan gave no hint of what his own thoughts might be. He stood with folded arms as placidly as if upon his own deck; his lips smiled and his eyes were untroubled.

“What are you doing here?” the Freebooter demanded abruptly.

“I found it necessary to leave the rendezvous at Tortage before moonrise last night,” answered Conan. “I departed in a leaky boat, and rowed and bailed all night. Just at dawn I saw your topsails, and left the miserable tub to sink, while I made better speed in the water.”

“There are sharks in these waters,” growled Zaporavo, and was vaguely irritated by the answering shrug of the mighty shoulders. A glance toward the waist showed a screen of eager faces staring upward. A word would send them leaping up on the poop in a storm of swords that would overwhelm even such a fighting-man as the stranger looked to be.

“Why should I burden myself with every nameless vagabond that the sea casts up?” snarled Zaporavo, his look and manner more insulting than his words.