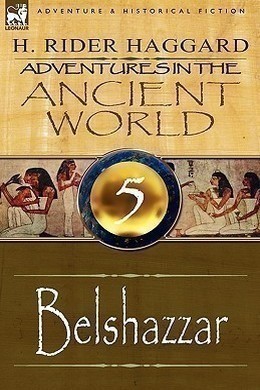 Ramose is the offspring of an Egyptian Pharaoh and a Greek woman. Brought up in a life of luxury he is catapulted into a life of adventure which leads him to the fall of Babylon at the hand of the Persian Empire under Cyrus. The last novel written by Haggard; finished just before his death and published posthumously.

Now when by the favour of the most high God, Him whom I worship, to whom every man is gathered at last, now, I say, when I am old, many have urged upon me that I, Ramose, should set down certain of those things that I have seen in the days of my life, and particularly the tale of the fall of Babylon, the mighty city, before Cyrus the Persian, which chanced when he whom the Greeks called Nabonidus being newly dead, Belshazzar his son was king.

Therefore, having ever been a lover of letters, this I do in the Grecian tongue here in my house at Memphis, the great city of the Nile, whereof to-day I am the governor under Darius the Persian, for it has pleased God after many adversities to bring me to this peace and dignity at last. Whether any will read this book when it is written, or whether it will perish with me, I do not know, nor indeed does it trouble me much, since none can tell the end of anything good or ill, and all must happen as it is decreed. Man makes a beginning, but the rest is in the hands of fate; indeed his life itself is but a beginning of which the end is hid.

Now to-day when he is almost forgotten, I can say without fear that I am a king’s son, for my father was none other than the Pharaoh Uah-ab- Ra, whom the Greeks called Apries and the Hebrews Hophra. Nor is my blood all royal, seeing that I was not the son of the wife of Pharaoh, but of one of his women, a Grecian lady named Chloe, the daughter of Chion, an Athenian by birth, of whom the less said the better for my mother told me that being a spendthrift and in want of money, he turned her beauty to account by giving her to Apries in exchange for a great present. I know no more of the matter because she would seldom speak of it, saying that it was shameful, adding only that her father was well-born; that her mother had died when she was an infant, and that before she came to the court at Sais, they saw many changes of fortune, living sometimes in wealth, but for the most part humbly and in great poverty which in after years bred in her a love of rank and riches.

Here in the palace of Sais during the little time that my mother was in favour with Pharaoh, I was born, and here I lived till I was a young man grown, being brought up with the sons of the great nobles and taught all things that one of my station should know, especially the art of war and how to ride and handle weapons. Further I got learning because always from the first I loved it, being taught many things by Greek masters who were about the court, as well as by Egyptians; also by a certain Babylonian named Belus, a doctor who was versed in strange lore concerning the stars. Of this Belus, my master and friend but for whom I should long ago be dead, I shall have much to tell.

Thus it came about that in the end I could read and speak Greek as well as I could Egyptian, which was not to be wondered at, seeing that I learned it at my mother’s breast. Also I mastered the Babylonian or Chaldean tongue, though not so well, and with it the curious writing of that people.

Of my father, the Pharaoh, I saw little for he had so many children such as I, born of different mothers, that he took small heed of us, he upon whom lay this hard fortune, that from those who were his queens according to the law of Egypt, he had no offspring save one daughter only, while from those who were not his queens he had many. This was a heavy grief to the Pharaoh my father, who saw in it the hands of the gods to whom he made great sacrifices, especially to Ptah-Khepera the Creator and Father of Life, building up his temple at Memphis, and praying of him a son of the pure blood. But no son came and an oracle told him that he who loved the Greeks so much must to the Greeks for offspring, which was true, for all his sons were born of Grecian women, as perhaps the oracle knew already.

On a certain day I and other lads of my age were running races after the Grecian fashion. In the long race I outran all the rest, and fell panting and exhausted into the arms of one who, followed by three companions, stood wrapped in a dark cloak, (for the time was winter,) just by a wand that we had set in the ground to serve us as a winning- post.

“Well run and well won!” said a voice which I knew for that of Apries. “How are you named and who begot you?”

Now I rose from the ground upon which I had sunk, and pretending that he was a stranger to me, gasped out,

“Ramose is my name, and as for that of my begetter, go ask his of Pharaoh.”

“I thought it,” muttered Apries, considering me. Then he turned to the first of his councillors and said,

“You know of what we were talking just now; this lad is straight and strong and has a noble air; moreover I have a good report of him from his instructors who say that he loves learning. Why should he not fill a throne as well as another? The double crown would look well upon his brow.”