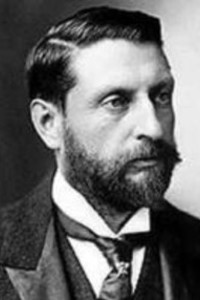 Sir Henry Rider Haggard, KBE was an English writer of adventure novels set in exotic locations, predominantly Africa, and a founder of the Lost World literary genre. He was also involved in agricultural reform around the British Empire. His stories, situated at the lighter end of Victorian literature, continue to be popular and influential.

Allan and the Holy Flower is a 1915 novel by H. Rider Haggard featuring Allan Quatermain. It first appeared serialised in The Windsor Magazine. Brother ...read more »

Once more Quatermain takes the hallucinogenic drug and gets to see a previous incarnation of himself–a life he lived thousands of years ago, when he was...read more »

Before there was Indiana Jones there was Allan Quartermain: the original explorer, treasure hunter, and adventurer. In this sequel to King Solomon’s Min...read more »

It may be remembered that in the last pages of his diary, written just before his death, Allan Quatermain makes allusion to his long dead wife, stating ...read more »

In this thrilling tale of danger and adventure, young Harry joins his father, the famous Alan Quatermain, on a hunt for lions deep in Africa. This publi...read more »

In this heart-stopping sequel to the classic novel “She,” Allan Quatermain discovers a lost kingdom in the heart of Africa, ruled by the mysterious Ayes...read more »

Ramose is the offspring of an Egyptian Pharaoh and a Greek woman. Brought up in a life of luxury he is catapulted into a life of adventure which leads h...read more »

Allan Quatermain, continues to indulge his penchant for globe-trotting adventure in a tumultuous journey across Africa. Upon his arrival, he discovers t...read more »

Haggard tells the story of Cleopatra from the viewpoint of an Ancient Egyptian priest who is given the responsibility of overthrowing the supposed impos...read more »

This book, although it can be read as a separate story, is the third of the trilogy of which Marie and Child of Storm are the first two parts. It narrat...read more »

An extraordinarily beautiful Indian princess and a white Englishman fall in love but suffer deeply because of their feelings. Set mostly in Central Amer...read more »

Allan Quatermain is confronted with the legend of the Heu-Heu, a monster who eats humans, while sheltering from a thunderstorm in the Drakensberg mounta...read more »

Quartermain (the main character from the many adventures found in the Alan Quartermain series) was a progressive Victorian big game hunter in Africa who...read more »

Following the disappearance of his brother, Sir Henry Curtis tracks down Allan Quartermain, a trader and hunter who knows Africa as well as any white ma...read more »

The story which is narrated in the following pages came to me from the lips of my old friend Allan Quatermain, or Hunter Quatermain, as we used to call ...read more »

To return to old Magepa. I had known him for many years. The first time we met was in the battle of the Tugela. I was fighting for the king’s son, Umbel...read more »

Allan Quatermain has determined to go farther afield than he had ever traveled before, into the depths of the African jungle – on a march inland to the ...read more »

Before there was Indiana Jones there was Allan Quartermain: the original explorer, treasure hunter, and adventurer. The Quartermain books have captivate...read more »

Haggard’s penultimate novel! His cousin Algernon was different indeed. To begin with, his attire was faultless, made by the best tailor in London and ap...read more »

This remarkable novel by adventure writer H. Rider Haggard can be enjoyed on many levels. As a tale of adventure, it takes the reader through 16th-centu...read more »

Nada the Lily is the thrilling story of the brave Zulu warrior Umslopogaas and his love for the most beautiful of Zulu women, Nada the Lily. Young Umslo...read more »

The last book published in Haggard’s lifetime is a standalone ancient-Egyptian fantasy. It opens at an almost breakneck pace, with Pharaoh deposed and k...read more »

Ayesha is She-Who-Must-Be-Obeyed, a 2,000-year-old queen who rules a fabled lost city deep in a maze of African caverns. She has the occult wisdom of Is...read more »

Allan Quartermain – our hero – and Ayesha (that is, She Who Must Be Obeyed) share the limelight in this great adventure, but oddly enough considering th...read more »

Sitting beside entrancing Lady Ragnall while the smoke of an ancient Egyptian herb grows thick around them, Allan Quatermain finds himself departing the...read more »

Leonard Outram, a young Englishman who’s just lost his fortune along with and his fiancee’s hand, makes an oath: he’ll win back his home and live happil...read more »

Treasure and the occult are vividly blended in this stirring tale of Africa. Allan Quatermain finds a village in the middle of the Dark Continent ruled ...read more »

Three Englishmen, marooned on a mysterious South Sea island, learn of the islanders’ powerful god Oro, who has been sleeping for 250,000 years. They man...read more »

In the fourth and final book in the She sequence, the beautiful and immortal Ayesha tells her tale of power, wisdom, love, and deception, in her own wor...read more »