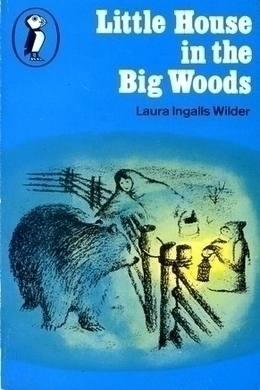 Little House in the Big Woods

Wolves and panthers and bears roamed the deep Wisconsin woods. Still, Laura Ingalls’ father preferred to live miles away from the nearest neighbors. So Pa built a snug cabin for Ma, Laura, Mary and Baby Carrie. He hunted and trapped and farmed. Ma made her own cheese and sugar. All night long, the wind howled lonesomely, but Pa played his fiddle and sang, keeping the family safe and cozy.

Once upon a time, sixty years ago, a little girl lived in the Big Woods of Wisconsin, in a little gray house made of logs.

Wolves lived in the Big Woods, and bears, and huge wild cats. Muskrats and mink and otter lived by the streams. Foxes had dens in the hills and deer roamed everywhere.

To the east of the little log house, and to the west, there were miles upon miles of trees, and only a few little log houses scattered far apart in the edge of the Big Woods.

So far as the little girl could see, there was only the one little house where she lived with her Father and Mother, her sister Mary and baby sister Carrie. A wagon track ran before the house, turning and twisting out of sight in the woods where the wild animals lived, but the little girl did not know where it went, nor what might be at the end of it.

The little girl was named Laura and she called her father, Pa, and her mother, Ma. In those days and in that place, children did not say Father and Mother, nor Mamma and Papa, as they do now.

At night, when Laura lay awake in the trundle bed, she listened and could not hear anything at all but the sound of the trees whispering together. Sometimes, far away in the night, a wolf howled. Then he came nearer, and howled again.

It was a scary sound. Laura knew that wolves would eat little girls. But she was safe inside the solid log walls. Her father’s gun hung over the door and good old Jack, the brindle bulldog, lay on guard before it. Her father would say,

“Go to sleep, Laura. Jack won’t let the wolves in.” So Laura snuggled under the covers of the trundle bed, close beside Mary, and went to sleep.

One night her father picked her up out of bed and carried her to the window so that she might see the wolves. There were two of them sitting in front of the house. They looked like shaggy dogs. They pointed their noses at the big, bright moon, and howled.

Jack paced up and down before the door, growling. The hair stood up along his back and he showed his sharp, fierce teeth to the wolves. They howled, but they could not get in.

The house was a comfortable house. Upstairs there was a large attic, pleasant to play in when the rain drummed on the roof. Downstairs was the small bedroom, and the big room. The bedroom had a window that closed with a wooden shutter. The big room had two windows with glass in the panes, and it had two doors, a front door and a back door.

All around the house was a crooked rail fence, to keep the bears and the deer away.

In the yard in front of the house were two beautiful big oak trees. Every morning as soon as she was awake Laura ran to look out of the window, and one morning she saw in each of the big trees a dead deer hanging from a branch.

Pa had shot the deer the day before and Laura had been asleep when he brought them home at night and hung them high in the trees so the wolves could not get the meat.

That day Pa and Ma and Laura and Mary had fresh venison for dinner. It was so good that Laura wished they could eat it all. But most of the meat must be salted and smoked and packed away to be eaten in the winter.

For winter was coming. The days were shorter, and frost crawled up the window panes at night. Soon the snow would come. Then the log house would be almost buried in snowdrifts, and the lake and the streams would freeze. In the bitter cold weather Pa could not be sure of finding any wild game to shoot for meat.

The bears would be hidden away in their dens where they slept soundly all winter long. The squirrels would be curled in their nests in hollow trees, with their furry tails wrapped snugly around their noses. The deer and the rabbits would be shy and swift. Even if Pa could get a deer, it would be poor and thin, not fat and plump as deer are in the fall.

Pa might hunt alone all day in the bitter cold, in the Big Woods covered with snow, and come home at night with nothing for Ma and Mary and Laura to eat.

So as much food as possible must be stored away in the little house before winter came.

Pa skinned the deer carefully and salted and stretched the hides, for he would make soft leather of them. Then he cut up the meat, and sprinkled salt over the pieces as he laid them on a board.