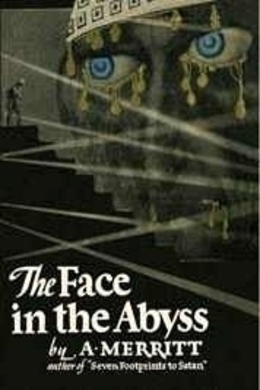 The Face In The Abyss

While searching for lost Inca treasure in South America, American mining engineer, Nicholas Graydon encounters Suarra, handmaiden to the Snake Mother of Yu-Atlanchi. She leads Graydon to an abyss where Nimir, the Lord of Evil is imprisoned in a face of gold. While Graydon’s companions are transformed by the face into globules of gold on account of their greed, he is saved by Suarra and the Snake Mother whom he joins in their struggle against Nimir.

Nicholas Graydon ran into Starrett in Quito. Rather, Starrett sought him out there. Graydon had often heard of the big West Coast adventurer, but their trails had never crossed. It was with lively curiosity that he opened his door to his visitor.

Starrett came to the point at once. Graydon had heard the legend of the treasure train bringing to Pizarro the ransom of the Inca Atahualpa? And that its leaders, learning of the murder of their monarch by the butcher-boy Conquistador, had turned aside and hidden the treasure somewhere in the Andean wilderness?

Graydon had heard it, hundreds of times; had even considered hunting for it. He said so. Starrett nodded.

Graydon rather liked the big man. There was a bluff directness that made him overlook the hint of cruelty in eyes and jaw. There were two others with him, Starrett said, both old companions. Graydon asked why they had picked him out. Starrett bluntly told him–because they knew he could afford to pay the expenses of the expedition. They would all share equally in the treasure. If they didn’t find it, Graydon was a first-class mining engineer, and the region they were going into was rich in minerals. He was practically sure of making some valuable discovery on which they could cash in.

Graydon considered. There were no calls upon him. He had just passed his thirty-fourth birthday, and since he had been graduated from the Harvard School of Mines eleven years ago he had never had a real holiday. He could well afford the cost. There would be some excitement, if nothing else.

After he had looked over Starrett’s two comrades–Soames, a lanky, saturnine, hard-bitten Yankee, and Dancret, a cynical, amusing little Frenchman–they had drawn up an agreement and he had signed it.

They went down by rail to Cerro de Pasco for their outfit, that being the town of any size closest to where their trek into the wilderness would begin. A week later with eight burros and six arrieros, or packmen, they were within the welter of peaks through which, Starrett’s map indicated, lay their road.

It had been the map which had persuaded Graydon. It was no parchment, but a sheet of thin gold quite as flexible. Starrett drew it out of a small golden tube of ancient workmanship, and unrolled it. Graydon examined it and was unable to see any map upon it–or anything else. Starrett held it at a peculiar angle–and the markings upon it became plain.

It was a beautiful piece of cartography. It was, in fact, less a map than a picture. Here and there were curious symbols which Starrett said were signs cut upon the rocks along the way; guiding marks for those of the old race who would set forth to recover the treasure when the Spaniards had been swept from the land.

Whether it was clew to Atahualpa’s ransom hoard or to something else– Graydon did not know. Starrett said it was. But Graydon did not believe his story of how the golden sheet had come into his possession. Nevertheless, there had been purpose in the making of the map, and stranger purpose in the cunning with which the markings had been concealed. Something interesting lay at the end of that trail.

They found the signs cut in the rocks exactly as the sheet of gold had indicated. Gay, spirits high with anticipation, three of them spending in advance their share of the booty, they followed the symbols. Steadily they were led into the uncharted wilderness.

At last the arrieros began to murmur. They were approaching, they said, a region that was accursed, the Cordillera de Carabaya, where only demons dwelt. Promises of more money, threats, pleadings, took them along a little further. One morning the four awakened to find the arrieros gone, and with them half the burros and the major portion of their supplies.

They pressed on. Then the signs failed them. Either they had lost the trail, or the map which had led them truthfully so far had lied at the last.

The country into which they had penetrated was a curiously lonely one. There had been no sign of Indians since more than a fortnight before, when they had stopped at a Quicha village and Starrett had gotten mad drunk on the fiery spirit the Quichas distill. Food was hard to find. There were few animals and fewer birds.

Worst of all was the change which had come over Graydon’s companions. As high as they had been lifted by their certitude of success, just so deep were they in depression. Starrett kept himself at steady level of drunkenness, alternately quarrelsome and noisy, or brooding in sullen rage.