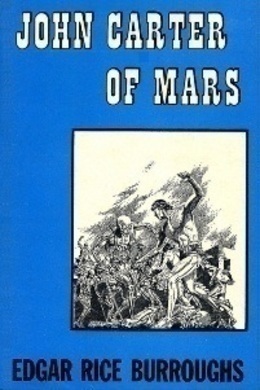 Here is the eleventh, and final, book in Edgar Rice Burroughs’ best-selling Martian Series: John Carter is pitted against the infamous Pew Mogel, who has kidnapped his beloved wife, Dejah Thoris. The famous Warlord of Barsoom is lured to a deserted city on the shores of the dead sea of Korvas. But instead of his wife, he finds a huge synthetic giant and hordes of great, white apes into each of which the brain of a man has been grafted. It takes all the skill of Carter’s famous fighting arm and extraordinary agility to preserve his life - and meanwhile the sands of time are running out for Dejah Thoris!

The moons of Mars looked down upon a giant Martian thoat as it raced silently over the soft mossy ground. Eight powerful legs carried the creature forward in great, leaping strides.

The path of the mighty beast was guided telepathically by the two people who sat in a huge saddle that was cinched to the thoat’s broad back.

It was the custom of Dejah Thoris, Princess of Helium, to ride forth weekly to inspect part of her grandfather’s vast farming and industrial kingdom.

Her journey to the farm lands wound through the lonely Helium Forest where grow the huge trees that furnish much of the lumber supply to the civilized nations of Mars.

Dawn was just breaking in the eastern Martian sky, and the jungle was dark and still damp with the evening dew. The gloom of the forest made Dejah Thoris thankful for the presence of her companion, who rode in the saddle in front of her. Her hands rested on his broad, bronze shoulders, and the feel of those smooth, supple muscles gave her a little thrill of confidence. One of his hands rested on the jewel-encrusted hilt of his great long sword and he sat his saddle very straight, for he was the mightiest warrior on Mars.

John Carter turned to gaze at the lovely face of his princess. “Frightened, Dejah Thoris?” he asked.

“Never, when I am with my chieftain,” Dejah Thoris smiled.

“But what of the forest monsters, the arboks?”

“Grandfather has had them all removed. On the last trip, my guard killed the only tree reptile I’ve ever seen.”

Suddenly Dejah Thoris gasped, clutched vainly at John Carter to regain her balance. The mighty thoat lurched heavily to the mossy ground. The riders catapulted over his head. In an instant the two had regained their feet; but the thoat lay very still.

Carter jerked his long sword from its scabbard and motioned Dejah Thoris to stay at his back.

The silence of the forest was abruptly shattered by an uncanny roar directly above them.

The tree reptile launched itself straight for the hated man-things. Carter lifted his sword and swung quickly to one side, drawing the monster’s attention away from Dejah Thoris, who crouched behind the fallen thoat.

The earthman’s first thrust sliced harmlessly through the beast’s outer skin. A huge claw knocked him off balance, and he found himself lying on the ground with the great fangs at his throat.

“Dejah Thoris, get the atom gun from the thoat’s back,” Carter called hoarsely to the girl. There was no answer.

Calling upon every ounce of his great strength, Carter drove his sword into the arbok’s neck. The creature shuddered. A stream of blood gushed from the wound. The man wriggled from under the dead body and sprang to his feet.

Wildly Carter searched the ground and trees surrounding the dead thoat and arbok. There was no sign of Dejah Thoris. She had utterly vanished.

A shaft of light from the rising sun filtering through the foliage glistened on an object at the earthman’s feet. Carter picked up a large shell, a shell recently ejected from a silent atom gun.

Springing to the dead thoat, he examined the saddle trappings. The atom gun that he had told Dejah Thoris to fire was still in its leather boot!

The earthman stooped beside the dead thoat’s head. There was a tiny, bloody hole through its skull. That shot and the charging arbok had been part of a well conceived plan to abduct Dejah Thoris, and kill him!

But Dejah Thoris–how had she disappeared so quickly, so completely?

Grimly, Carter set off at a run back to the forest toward Helium.

Noon found the earthman in a private audience chamber of Tardos Mors, Jeddak of Helium, grandfather of Dejah Thoris.

The old jeddak was worried. He thrust a rough piece of parchment into John Carter’s hand. Crude, bold letters were inscribed upon the parchment; and as Carter scanned the note his eyes burned with anger. It read:

“I, Pew Mogel, the most powerful ruler on Mars, have decided to take over the iron works of Helium. The iron will furnish me with all the ships I need to protect Helium and the other cities of Barsoom from invasion. If you have not evacuated all your workers from the iron mines and factories in three days, then I will start sending you the fingers of the Royal Princess of Helium. Hurry, because I may decide to send her tongue, which wags too much of John Carter. Remember, obey Pew Mogel, for he is all-powerful.”

Tardos Mors dug his nails into the palms of his hands. “Who is the upstart who calls himself the most powerful ruler of Mars?”

Carter looked thoughtfully at the note.

“He must have spies here,” he said. “Pew Mogel knew that I was to leave this morning with Dejah Thoris on a tour of inspection.”