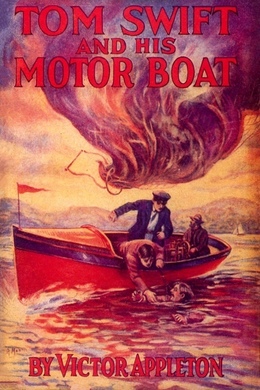 Tom Swift and his Motorboat

The Rivals of Lake Carlopa

Tom Swift’s father, a world famous scientist, has been robbed of one of his greatest inventions, and it’s up to Tom to bring the criminals to justice without getting himself killed in the process. Unfortunately, Tom himself quickly becomes a target of the rogues’ anger when he unknowingly buys a boat in which they had hidden a stolen diamond. He must use every bit of his wit to keep himself ahead of the gang of hardened felons. (source: Wikipedia)

“Where are you going, Tom?” asked Mr. Barton Swift of his son as the young man was slowly pushing his motor-cycle out of the yard toward the country road. “You look as though you had some object in view.”

“I want to have a look at that motor-boat.”

“Which boat is that, Tom? I don’t recall your speaking about a boat over at Lanton. What do you want to look at it for?”

“It’s the motor-boat those fellows had who tried to get away with your turbine model invention, dad. The one they used at the old General Harkness mansion, in the woods near the lake, and the same boat that fellow used when he got away from me the day I was chasing him here.”

“Oh, yes, I remember now. But what is the boat doing over at Lanton?”

“That’s where it belongs. It’s the property of Mr. Bently Hastings. The thieves stole it from him, and when they ran away from the old mansion, the time Mr. Damon and I raided the place, they left the boat on the lake. I turned it over to the county authorities, and they found out it belonged to Mr. Hastings. He has it back now, but I understand it’s somewhat damaged, and he wants to get rid of it. He’s going to sell it at auction to-day, and I thought I’d go over and take a look at it. You see–”

“Yes, I see, Tom,” exclaimed Mr. Swift with a laugh. “I see what you’re aiming at. You want a motor-boat, and you’re going all around Robin Hood’s barn to get at it.”

“Oh, I know you, Tom, my lad!” interrupted the inventor, shaking his finger at his son, who seemed somewhat confused. “You have a nice rowing skiff and a sailboat, yet you are hankering for a motor-boat. Come now, own up. Aren’t you?”

“Well, dad, a motor-boat certainly would go fine on Lake Carlopa. There’s plenty of room to speed her, and I wonder there aren’t more of them. I was going to see what Mr. Hastings’ boat would sell for, but I didn’t exactly think of buying it’ Still–”

“But you wouldn’t buy a damaged boat, would you?”

“It isn’t much damaged,” and in his eagerness the young inventor (for Tom Swift had taken out several patents) stood his motor-cycle up against the fence and came closer to his father. “It’s only slightly damaged,” he went on. “I can easily fix it. I looked it all over before I gave it in charge of the authorities, and it’s certainly a fine boat. It’s worth nine hundred dollars–or it was when it was new.”

“That’s a good deal of money for a boat,” and Mr. Swift looked serious, for though he was well off, he was inclined to be conservative.

“Oh, I shouldn’t think of paying that much. In fact, dad, I really had no idea of bidding at the auction. I only thought I’d go over and get an idea of what the boat might sell for. Perhaps some day–”

Tom paused. Since his father had begun to question him some new plans had come into the lad’s head. He looked at his parent and saw a smile beginning to work around the corners of Mr. Swift’s lips. There was also a humorous look in the eyes of the older inventor. He understood boys fairly well, even if he only had one, and he knew Tom perfectly.

“Would you really like to make a bid on that boat Tom?” he asked.

“Would I, dad? Well–” The youth did not finish, but his father knew what he meant.

“I suppose a motor-boat would be a nice thing to have on Lake Carlopa,” went on Mr. Swift musingly. “You and I could take frequent trips in it. It isn’t like a motor-cycle, only useful for one. What do you suppose the boat will go for, Tom?”

“I hardly know. Not a high price, I believe, for motor-boats are so new on our lake that few persons will take a chance on them. But if Mr. Hastings is getting another, he will not be so particular about insisting on a high price for the old one. Then, too, the fact that it is damaged will help to keep the price down, though I know I can easily put it in good shape. I would like to make a bid, if you think it’s all right.”

“Well, I guess you may, Tom, if you really want it. You have money of your own and a motor-boat is not a bad investment. What do you think ought to be the limit?”

“Would you consider a hundred and fifty dollars too high?”

Mr. Swift looked at Tom critically. He was plainly going over several matters in his mind, and not the least of them was the pluck his son had shown in getting back some valuable papers and a model from a gang of thieves. The lad certainly was entitled to some reward, and to allow him to get a boat might properly be part of it.

“I think you could safely go as high as two hundred dollars, Tom,” said Mr. Swift at length. “That would be my limit on a damaged boat for it might be better to pay a little more and get a new one. However, use your own judgment, but don’t go over two hundred. So the thieves who made so much trouble for me stole that boat from Mr. Hastings, eh?”