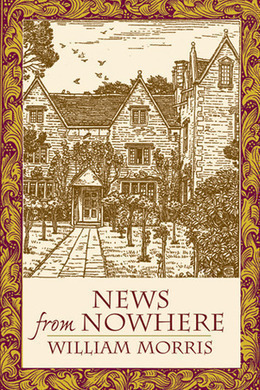 An Epoch of Rest: Being Some Chapters from a Utopian Romance

One of the most literary and readable of utopian novels, News from Nowhere chronicles the impressions of a nineteenth-century visitor to the twenty-second century, who finds England transformed into a socialist paradise. Morris’ idyllic society echoes themes from the writings of Ruskin and Marx but forms a distinctive expression of the author’s own egalitarian views. A distillation of Morris’ mature reflections on politics, art and society, this work was regarded as an exercise in sentimentality upon its publication. Modern readers, however, are likely to find resonance in its critique of state socialism and its proposals for an alternative society.

Up at the League, says a friend, there had been one night a brisk conversational discussion, as to what would happen on the Morrow of the Revolution, finally shading off into a vigorous statement by various friends of their views on the future of the fully-developed new society.

Says our friend: Considering the subject, the discussion was good-tempered; for those present being used to public meetings and after- lecture debates, if they did not listen to each others’ opinions (which could scarcely be expected of them), at all events did not always attempt to speak all together, as is the custom of people in ordinary polite society when conversing on a subject which interests them. For the rest, there were six persons present, and consequently six sections of the party were represented, four of which had strong but divergent Anarchist opinions. One of the sections, says our friend, a man whom he knows very well indeed, sat almost silent at the beginning of the discussion, but at last got drawn into it, and finished by roaring out very loud, and damning all the rest for fools; after which befel a period of noise, and then a lull, during which the aforesaid section, having said good-night very amicably, took his way home by himself to a western suburb, using the means of travelling which civilisation has forced upon us like a habit. As he sat in that vapour-bath of hurried and discontented humanity, a carriage of the underground railway, he, like others, stewed discontentedly, while in self-reproachful mood he turned over the many excellent and conclusive arguments which, though they lay at his fingers’ ends, he had forgotten in the just past discussion. But this frame of mind he was so used to, that it didn’t last him long, and after a brief discomfort, caused by disgust with himself for having lost his temper (which he was also well used to), he found himself musing on the subject- matter of discussion, but still discontentedly and unhappily. “If I could but see a day of it,” he said to himself; “if I could but see it!”

As he formed the words, the train stopped at his station, five minutes’ walk from his own house, which stood on the banks of the Thames, a little way above an ugly suspension bridge. He went out of the station, still discontented and unhappy, muttering “If I could but see it! if I could but see it!” but had not gone many steps towards the river before (says our friend who tells the story) all that discontent and trouble seemed to slip off him.

It was a beautiful night of early winter, the air just sharp enough to be refreshing after the hot room and the stinking railway carriage. The wind, which had lately turned a point or two north of west, had blown the sky clear of all cloud save a light fleck or two which went swiftly down the heavens. There was a young moon halfway up the sky, and as the home- farer caught sight of it, tangled in the branches of a tall old elm, he could scarce bring to his mind the shabby London suburb where he was, and he felt as if he were in a pleasant country place–pleasanter, indeed, than the deep country was as he had known it.

He came right down to the river-side, and lingered a little, looking over the low wall to note the moonlit river, near upon high water, go swirling and glittering up to Chiswick Eyot: as for the ugly bridge below, he did not notice it or think of it, except when for a moment (says our friend) it struck him that he missed the row of lights down stream. Then he turned to his house door and let himself in; and even as he shut the door to, disappeared all remembrance of that brilliant logic and foresight which had so illuminated the recent discussion; and of the discussion itself there remained no trace, save a vague hope, that was now become a pleasure, for days of peace and rest, and cleanness and smiling goodwill.

In this mood he tumbled into bed, and fell asleep after his wont, in two minutes’ time; but (contrary to his wont) woke up again not long after in that curiously wide-awake condition which sometimes surprises even good sleepers; a condition under which we feel all our wits preternaturally sharpened, while all the miserable muddles we have ever got into, all the disgraces and losses of our lives, will insist on thrusting themselves forward for the consideration of those sharpened wits.

In this state he lay (says our friend) till he had almost begun to enjoy it: till the tale of his stupidities amused him, and the entanglements before him, which he saw so clearly, began to shape themselves into an amusing story for him.