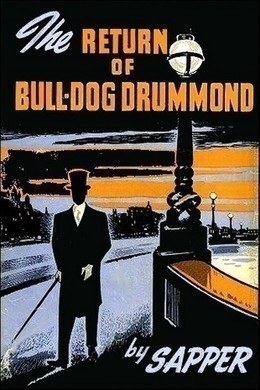 The Return of Bulldog Drummond

While staying as a guest at Merridale Hall, Captain Hugh ‘Bulldog’ Drummond’s peaceful repose is disturbed by a frantic young man who comes dashing into the house, trembling and begging for help. When two warders arrive, asking for a man named Morris - a notorious murderer who has escaped from Dartmoor - Drummond assures them that they are chasing the wrong man. In which case, who on earth is this terrified youngster?

Slowly but relentlessly the mist was creeping over the moor. It moved in little eddies; then it would make a surge forward like a great silent wave breaking on the shore and not receding. One by one the landmarks were blotted out, until only some of the highest tors stuck up like rugged islands from a sea of white.

As yet it had not reached Merridale Hall, which stood on highish ground, some hundred yards from the main road to Yelverton, though already it was drifting sluggishly round the base of the little hill on which the house was built. Soon it would be covered: it would become a place cut off from the outside world, a temporary prison of stones and mortar whose occupants must perforce rely upon themselves. And it is possible that a dreamer standing at the smoking-room window, and gazing over the billowing landscape of cotton wool, might have pondered on the different dramas even then being enacted in all the other isolated dwellings. Strange stories of crime, of passion; tragedies of hate and love; queer figments of imagination would perhaps have passed in succession through his mind, always provided that the dreamer was deaf. For if possessed of normal hearing, the only possible idea that could have occupied his brain would have been how to preserve it.

Twice already had the butler entered, only to retire defeated from the scene. The cook, who had been trying to obtain a little well-earned rest herself, had then advanced into the hall and dropped a fusillade of saucepans one after another on the tiled floor without the slightest success. And finally, in despair, the staff had barricaded itself in the pantry and turned on the gramophone.

There was something majestic about the mighty cadence. The higher note caused the window to rattle slightly: the lower one seemed to come from the deep places of the earth and dealt with the rest of the room. And ever and anon a half-strangled snort shook the performer with a dreadful convulsion. In short, Hugh Drummond was enjoying a post-prandial nap.

His hands were thrust deep in his trouser pockets, his legs were stretched out straight in front of him.

Between them, her head on one knee, sat Bess, his black cocker spaniel. Unperturbed by the devastating roars that came from above her, she, too, slept, trembling every now and then in an ecstasy of dream hunting. And the mist rolled slowly by outside, mounting nearer and nearer to the house.

Suddenly, so abruptly that it seemed as if a sound-proof door had been shut, the noise ceased.

And had the mystical dreamer by the window been really present, he would have seen a rather surprising sight. For the man who the fraction of a second before had been sound asleep was now sitting up in his chair with every sense alert. The dog, too, after one look at her master’s face, was sitting rigid with her eyes fixed on the window. Volleys of saucepans might be of no avail, but the sound which had caused this instantaneous change was different. For from the direction of the main road had come the crack of a rifle.

Still with his hands in his pockets, the man got up and crossed to the window. The mist was not more than twenty yards away, and for a while he stared down the drive. Who could be firing on a day like that? And yet he knew that he had not imagined that shot.

Suddenly his eyes narrowed: the figure of a man running at top speed came looming out of the fog. He raced towards the house, and on his face was a look of abject terror. And the next moment he heard the front door open and shut, and the sound of footsteps in the hall outside.

“Down, girl!” he ordered quietly, as Bess began to growl. “It would seem that there are doings abroad.”

Drummond strode to the door and stepped into the hall. Cowering in a corner was a young man, whose breath still came in great choking gasps, and whose trembling hands gave away the condition he was in. For a moment or two he stared at Drummond fearfully; then, getting up, he rushed over to him and seized his arm.

“Who are after you?” asked Drummond quietly, and even as he spoke there came a ring at the door, accompanied by an imperative tattoo on the knocker.

“Quick: tell me,” he went on, but he spoke to empty air. For with a cry of terror, the youngster had darted into the smoking-room and shut himself in.

There came a further loud knocking, and with a shrug of his great shoulders Drummond crossed the hall and opened the front door. Outside stood two men in uniform, each with a rifle slung over his back, and he recognised them at once as warders from Dartmoor.

“Good afternoon,” he said affably. “What can I do for you?”

The senior touched his cap. “Do you mind if we search your outbuildings, sir?” he said. “A man we’re after disappeared up your drive, and got away in the fog. But he must have come here: there ain’t nowhere else he could have gone.”