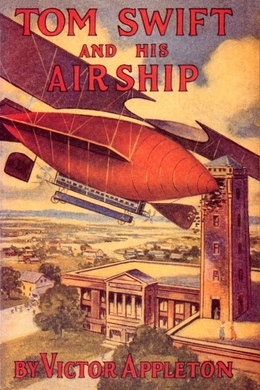 Tom Swift and his Airship

The Stirring Cruise of the Red Cloud

Tom Swift has finished his latest invention: the Red Cloud, a fast and innovative airship and he’s anxious for a cross-country trial. But just before he and his friends take off, the Shopton bank is robbed. No sooner is Tom in the air than he blamed for the robbery without his knowledge. Suddenly, he’s a wanted fugitive, and doesn’t know why until he’s half-way across the country. With no safe harbor or friend on the land below, Tom must race back to Shopton to clear his name before he’s shot out of the sky. (source: Wikipedia)

“All ready, Mr. Sharp,” replied a young man, who was stationed near some complicated apparatus, while the questioner, a dark man, with a nervous manner, leaned over a large tank.

“I’m going to turn on the gas now,” went on the man. “Look out for yourself. I’m not sure what may happen.”

“Neither am I, but I’m ready for it. If it does explode it can’t do much damage.”

“Oh, I hope it doesn’t explode. We’ve had so much trouble with the airship, I trust nothing goes wrong now.”

“Well, turn, on the gas, Mr. Sharp,” advised Tom Swift. “I’ll watch the pressure gauge, and, if it goes too high, I’ll warn you, and you can shut it off.”

The man nodded, and, with a small wrench in his hand, went to one end of the tank. The youth, looking anxiously at him, turned his gaze now and then toward a gauge, somewhat like those on steam boilers, which gauge was attached to an aluminum, cigar-shaped affair, about five feet long.

Presently there was a hissing sound in the small frame building where the two were conducting an experiment which meant much to them. The hissing grew louder.

“I will,” answered the lad. “But the pressure is going up very slowly. Maybe you’d better turn on more gas.”

“I will. Here she goes! Look out now. You can’t tell what is going to happen.”

With a sudden hiss, as the powerful gas, under pressure, passed from the tank, through the pipes, and into the aluminum container, the hand on the gauge swept past figure after figure on the dial.

“Shut it off!” cried Tom quickly. “It’s coming too fast! Shut her off!”

The man sprang to obey the command, and, with nervous fingers, sought to fit the wrench over the nipple of the controlling valve. Then his face seemed to turn white with fear.

Tom Swift, the young inventor, whose acquaintance some of you have previously made, gave one look at the gauge, and seeing that the pressure was steadily mounting, endeavored to reach, and open, a stop-cock, that he might relieve the strain. One trial showed him that the valve there had jammed too, and catching up a roll of blue prints the lad made a dash for the door of the shop. He was not a second behind his companion, and hardly had they passed out of the structure before there was a loud explosion which shook the building, and shattered all the windows in it.

Pieces of wood, bits of metal, and a cloud of sawdust and shavings flew out of the door after the man and the youth, and this was followed by a cloud of yellowish smoke.

“Are you hurt, Tom?” cried Mr. Sharp, as he swung around to look back at the place where the hazardous experiment had been conducted.

“I’m all right. But it was touch and go! Good thing you had the gauge on or we’d never have known when to run. Well, we’ve made another failure of it,” and the man spoke somewhat bitterly.

“Never mind, Mr. Sharp,” went on Tom Swift. “I think it will be the last mistake. I see what the trouble is now; and know how to remedy it. Come on back, and we’ll try it again; that is if the tank hasn’t blown up.”

“No, I guess that’s all right. It was the aluminum container that went up, and that’s so light it didn’t do much damage. But we’d better wait until some of those fumes escape. They’re not healthy to breathe.”

The cloud of yellowish smoke was slowly rolling away, and the man and lad were approaching the shop, which, in spite of the explosion that had taken place in it, was still intact, when an aged man, coming from a handsome house not far off, called out, “Tom, is anyone hurt?”

“Well, we had another explosion. We can’t seem to get the right mixture of the gas, but I think we’ve had the last of our bad luck. We’re going to try it again. Up to now the gas has been too strong, the tank too weak, or else our valve control is bad.”

“Oh dear, Mr. Swift! Do tell them to be careful!” a woman’s voice chimed in. “I’m sure something dreadful will happen! This is about the tenth time something has blown up around here, and–”

“Well, goodness me! Isn’t nine almost as bad as ten? There I was, just putting my bread in the oven,” went on Mrs. Baggert, the housekeeper, “and I was so startled that I dropped it, and now the dough is all over the kitchen floor. I never saw such a mess.”

“I’m sorry,” answered the youth, trying not to laugh. “We’ll see that it doesn’t happen again.”

“Yes; that’s what you always say,” rejoined the motherly-looking woman, who looked after the interests of Mr. Swift’s home.

“Well, we mean it this time,” retorted the lad. “We see where our mistake was; don’t we. Mr. Sharp?”

“I think so,” replied the other seriously.