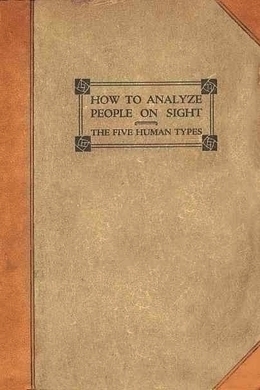 How to Analyze People on Sight

Through the Science of Human Analysis: The Five Human Types

Modern science has proved that the fundamental traits of every individual are indelibly stamped in the shape of his body, head, face and hands–an X-ray by which you can read the characteristics of any person on sight. From this book you are going to learn what type of person you are and the main reasons why you have not been getting the maximum out of yourself. Also you are going to learn how to get the maximum co-operation out of others. This co-operation is vital to happiness and success.

Note: Bear in mind at the beginning of this and every other chapter, that we are describing the extreme or unmixed type. Before leaving this book you will understand combination types and should read people as readily as you now read your newspaper.

A general rotundity of outline characterizes this type. He is round in every direction. Fat rolls away from his elbows, wrists, knees and shoulders. (See Chart 1)

Soft flesh thickly padded over a small-boned body distinguishes the pure Alimentive type. In men of this type the largest part of the body is around the girth; in women it is around the hips. These always indicate a large nutritive system in good working order. Fat is only surplus tissue–the amount manufactured by the assimilative system over and above the needs of the body.

Fat is more soft and spongy than bone or muscle and lends to its wearer a softer structure and appearance.

Because his bones are small the pure Alimentive has small feet and small hands. How many times you have noted with surprise that the two hundred pound woman had tiny feet! The inconvenience of “getting around” which you have noticed in her is due to the fact that while she has more weight to carry she has smaller than average feet with which to do it.

A head comparatively small for the body is another characteristic of the extreme Alimentive. The neck and lower part of the head are covered with rolls of fat. This gives the head the effect of spreading outward from the crown as it goes down to the neck, thus giving the neck a short, disproportionately large appearance.

A “full-moon” face with double or triple chins gives this man his “baby face.” (See Chart 2) Look carefully at any extremely fat person and you will see that his features are inclined to the same immaturity of form that characterizes his body.

Very few fat men have long noses. Nearly all fat men and women have not only shorter, rounder noses but shorter upper lips, fuller mouths, rounder eyes and more youthful expressions than other people–in short, the features of childhood.

The entire physical makeup of this type is modeled upon the circle–round hands with dimples where the knuckles are supposed to be; round fingers, round feet, round waist, round limbs, sloping shoulders, curving thighs, bulging calves, wrists and ankles.

Wherever you see curves predominating in the physical outlines of any person, that person is largely of the Alimentive type and will always exhibit alimentive traits.

The Man of Few Movements

The Alimentive is a man of unhurried, undulating movements. The difficulty in moving large bodies quickly necessitates a slowing down of all his activities. These people are easeful in their actions, make as few moves as possible and thereby lend an air of restfulness wherever they go.

Because it is difficult to turn their heads, extremely fat people seldom are aware of what goes on behind them.

Very fat people waddle when they walk, though few of them realize it. They can not watch themselves go by and no one else has the heart to impart bad news to this pleasant person.

The fat man spills over chairs and out of his clothes. Big arm chairs, roomy divans and capacious automobiles are veritable dykes to these men. Note the bee-line the fat person makes for the big leather chair when he enters a room!

The best that money can buy are the kinds of clothes purchased by the Alimentive whenever he can afford them. And it often happens that he can afford them, especially if the Cerebral system comes second in his makeup. If he is in middle circumstances his clothes will be chosen chiefly for comfort. Even the rich Alimentive “gets into something loose” as soon as he is alone. Baggy trousers, creased sleeves, soft collars and soft cuffs are seen most frequently on fat men.

Comfort is one of the very first aims of this type. To attain it he often wears old shoes or gloves long past their time to save breaking in a new pair.

Cold weather affects this type. If you will look about you the first cold day of autumn you will note that most of the overcoats are on the plump men.

How the Fat Man Talks