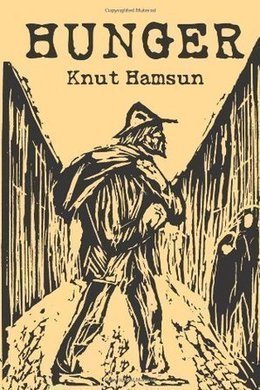 A must-read for fans of modernist literature, Hunger is a literary tour de force that was influenced equally by Dostoyevsky and Zola but made new by author Knut Hamsun’s unique creative approach. The novel details the descent into near-starvation of a young intellectual and the downward spiral of misadventures he encounters in the course of trying to find food.

I was lying awake in my attic and I heard a clock below strike six. It was already broad daylight, and people had begun to go up and down the stairs. By the door where the wall of the room was papered with old numbers of the Morgenbladet, I could distinguish clearly a notice from the Director of Lighthouses, and a little to the left of that an inflated advertisement of Fabian Olsens’ new-baked bread.

The instant I opened my eyes I began, from sheer force of habit, to think if I had anything to rejoice over that day. I had been somewhat hard-up lately, and one after the other of my belongings had been taken to my “Uncle.” I had grown nervous and irritable. A few times I had kept my bed for the day with vertigo. Now and then, when luck had favoured me, I had managed to get five shillings for a feuilleton from some newspaper or other.

It grew lighter and lighter, and I took to reading the advertisements near the door. I could even make out the grinning lean letters of “winding-sheets to be had at Miss Andersen’s” on the right of it. That occupied me for a long while. I heard the clock below strike eight as I got up and put on my clothes.

I opened the window and looked out. From where I was standing I had a view of a clothes, line and an open field. Farther away lay the ruins of a burnt-out smithy, which some labourers were busy clearing away. I leant with my elbows resting on the window-frame and gazed into open space. It promised to be a clear day–autumn, that tender, cool time of the year, when all things change their colour, and die, had come to us. The ever-increasing noise in the streets lured me out. The bare room, the floor of which rocked up and down with every step I took across it, seemed like a gasping, sinister coffin. There was no proper fastening to the door, either, and no stove. I used to lie on my socks at night to dry them a little by the morning. The only thing I had to divert myself with was a little red rocking-chair, in which I used to sit in the evenings and doze and muse on all manner of things. When it blew hard, and the door below stood open, all kinds of eerie sounds moaned up through the floor and from out the walls, and the Morgenbladet near the door was rent in strips a span long.

I stood up and searched through a bundle in the corner by the bed for a bite for breakfast, but finding nothing, went back to the window.

God knows, thought I, if looking for employment will ever again avail me aught. The frequent re pulses, half-promises, and curt noes, the cherished, deluded hopes, and fresh endeavours that always resulted in nothing had done my courage to death. As a last resource, I had applied for a place as debt collector, but I was too late, and, besides, I could not have found the fifty shillings demanded as security. There was always something or another in my way. I had even offered to enlist in the Fire Brigade. There we stood and waited in the vestibule, some half-hundred men, thrusting our chests out to give an idea of strength and bravery, whilst an inspector walked up and down and scanned the applicants, felt their arms, and put one question or another to them. Me, he passed by, merely shaking his head, saying I was rejected on account of my sight. I applied again without my glasses, stood there with knitted brows, and made my eyes as sharp as needles, but the man passed me by again with a smile; he had recognized me. And, worse than all, I could no longer apply for a situation in the garb of a respectable man.

How regularly and steadily things had gone downhill with me for a long time, till, in the end, I was so curiously bared of every conceivable thing. I had not even a comb left, not even a book to read, when things grew all too sad with me. All through the summer, up in the churchyards or parks, where I used to sit and write my articles for the newspapers, I had thought out column after column on the most miscellaneous subjects. Strange ideas, quaint fancies, conceits of my restless brain; in despair I had often chosen the most remote themes, that cost me long hours of intense effort, and never were accepted. When one piece was finished I set to work at another. I was not often discouraged by the editors’ “no.” I used to tell myself constantly that some day I was bound to succeed; and really occasionally when I was in luck’s way, and made a hit with something, I could get five shillings for an afternoon’s work.