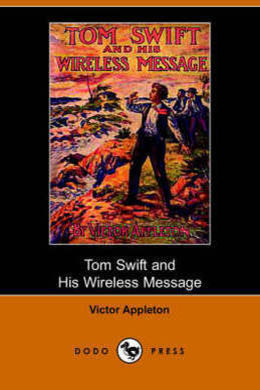 Tom Swift and his Wireless Message

The Castaways of Earthquake Island

Tom Swift and his friends decide to trial an experimental airship near the New Jersey coast, and are unexpectedly swept out to sea by hurricane winds. Unable to steer or navigate without tearing the airship apart, the hapless crew must simply let the storm take them wherever it will. Unfortunately, the storm proves too much for the craft and Tom makes a crash landing on the uninhabited and crumbling Earthquake Island. (source: Wikipedia)

Tom Swift stepped from the door of the machine shop, where he was at work making some adjustments to the motor of his airship, and glanced down the road. He saw a cloud of dust, which effectually concealed whatever was causing it.

“Some one must be in a hurry this morning,” the lad remarked, “Looks like a motor speeding along. MY! but we certainly do need rain,” he added, as he looked up toward the sky. “It’s very dusty. Well, I may as well get back to work. I’ll take the airship out for a flight this afternoon, if the wind dies down a bit.”

The young inventor, for Tom Swift himself had built the airship, as well as several other crafts for swift locomotion, turned to re-enter the shop.

Something about the approaching cloud of dust, however, held his attention. He glanced more intently at it.

“If it’s an automobile coming along,” he murmured, “it’s moving very slowly, to make so much fuss. And I never saw a motor-cycle that would kick up as much sand, and not speed along more. It ought to be here by now. I wonder what it can be?”

The cloud of highway dirt rolled along, making some progress toward Tom’s house and the group of shops and other buildings surrounding it. But, as the lad had said, the dust did not move at all quickly in comparison to any of the speedy machines that might be causing it. And the cloud seemed momentarily to grow thicker and thicker.

“I wonder if it could be a miniature tornado, or a cyclone or whirlwind?” and Tom spoke aloud, a habit of his when he was thinking, and had no one to talk to. “Yet it can hardly be that.” he went on. “Guess I’ll watch and see what it is.”

Nearer and nearer came the dust cloud. Tom peered anxiously ahead, a puzzled look on his face. A few seconds later there came from the midst of the obscuring cloud a voice, exclaiming:

“G’lang there now, Boomerang! Keep to’ feet a-movin’ an’ we sho’ will make a record. ‘Tain’t laik we was a autermobiler, er a electricity car, but we sho’ hab been goin’ sence we started. Yo’ sho’ done yo’se’f proud t’day, Boomerang, an’ I’se gwine t’ keep mah promise an’ gib yo’ de bestest oats I kin find. Ah reckon Massa Tom Swift will done say we brought dis yeah message t’ him as quick as anybody could.”

Then there followed the sound of hoofbeats on the dusty road, and the rattle of some many-jointed vehicle, with loose springs and looser wheels.

“Eradicate Sampson!” exclaimed Tom. “But who would ever think that the colored man’s mule could get up such speed as that cloud of dust indicates. His mule’s feet must be working overtime, but he goes backward about as often as he moves forward. That accounts for it. There’s lots of dust, but not much motion.”

Once more, from the midst of the ball-like cloud of dirt came the voice of the colored man:

“Now behave yo’se’f, Boomerang. We’m almost dere an’ den yo’ kin sit down an’ rest if yo’ laik. Jest keep it up a little longer, an’ we’ll gib Massa Tom his telephone. G’lang now, Boomerang.”

The tattoo of hoofbeats was slowing up now, and the cloud of dust was not so heavy. It was gradually blowing away. Tom Swift walked down to the fence that separated the house, grounds and shops from the road. As he got there the sounds of the mule’s progress, and the rattle of the wagon, suddenly ceased.

“It’s all right, Eradicate. I’m here,” called Tom, and when the last of the dust had blown away, the lad waved his hand to an aged colored man, who sat upon the seat of perhaps the most dilapidated wagon that was ever dignified by such a name. It was held together with bits of wire, rope and strings, and each of the four wheels leaned out at a different angle. It was drawn by a big mule, whose bones seemed protruding through his skin, but that fact evidently worried him but little, for now the animal was placidly sleeping, while standing up, his long ears moving slowly to and fro.

“Am dat yo’, Massa Tom?” asked Eradicate, ceasing his task of jerking on the lines, to which operation the mule paid not the least attention.

“Yes, I’m here, Rad,” replied Tom, smiling. “I came out of my shop to see what all the excitement was about. How did you ever get your mule to make so much dust?”

“I done promise him an extra helpin’ ob oats ef he make good time,” said the colored man. “An’ he done it, too. Did yo’ see de dust we made?”