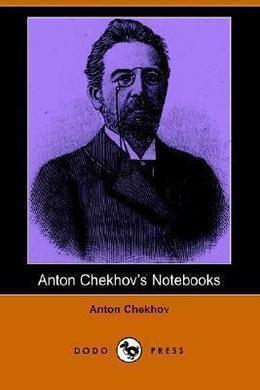 This volume consists of notes, themes, and sketches for works which Anton Chekhov intended to write, and are characteristic of the methods of his artistic production. Among his papers was found a series of sheets in a special cover with the inscription: “Themes, thoughts, notes, and fragments.” Madame L.O. Knipper-Chekhov, Chekhov’s wife, also possesses his notebook, in which he entered separate themes for his future work, quotations which he liked, etc. If he used any material, he used to strike it out in the note-book. The significance which Chekhov attributed to this material may be judged from the fact that he recopied most of it into a special copy book.

My neighbor V.N.S. told me that his uncle Fet-Shenshin, the famous poet, when driving through the Mokhovaia Street, would invariably let down the window of his carriage and spit at the University. He would expectorate and spit: Bah! His coachman got so used to this that every time he drove past the University, he would stop.

In January I was in Petersburg and stayed with Souvorin. I often saw Potapenko. Met Korolenko. I often went to the Maly Theatre. As Alexander [Chekhov’s brother] came downstairs one day, B.V.G. simultaneously came out of the editorial office of the Novoye Vremya and said to me indignantly: “Why do you set the old man (i.e. Souvorin) against Burenin?” I have never spoken ill of the contributors to the Novoye Vremya in Souvorin’s presence, although I have the deepest disrespect for the majority of them.

In February, passing through Moscow, I went to see L.N. Tolstoi. He was irritated, made stinging remarks about the décadents, and for an hour and a half argued with B. Tchitcherin, who, I thought, talked nonsense all the time. Tatyana and Mary [Tolstoi’s daughters] laid out a patience; they both wished, and asked me to pick a card out; I picked out the ace of spades separately for each of them, and that annoyed them. By accident there were two aces of spades in the pack. Both of them are extraordinarily sympathetic, and their attitude to their father is touching. The countess denounced the painter Gé all the evening. She too was irritated.

May 5. The sexton Ivan Nicolayevitch brought my portrait, which he has painted from a photograph. In the evening V.N.S. brought his friend N. He is director of the Foreign Department … editor of a magazine … and doctor of medicine. He gives the impression of being an unusually stupid person and a reptile. He said: “There’s nothing more pernicious on earth than a rascally liberal paper,” and told us that, apparently, the peasants whom he doctors, having got his advice and medicine free of charge, ask him for a tip. He and S. speak of the peasants with exasperation and loathing.

June 1. I was at the Vagankov Cemetery and saw the graves there of the victims of the Khodinka. [During the coronation of Nicholas II in Moscow hundreds of people were crushed to death in the Khodinka Fields.] I. Pavlovsky, the Paris correspondent of the Novoye Vremya, came with me to Melikhovo.

N. stayed with me from the 15th to the 18th August. He has been forbidden [by the authorities] to publish anything: he speaks contemptuously now of the younger G., who said to the new Chief of the Central Press Bureau that he was not going to sacrifice his weekly Nedelya for N.’s sake and that “We have always anticipated the wishes of the Censorship.” In fine weather N. walks in goloshes, and carries an umbrella, so as not to die of sunstroke; he is afraid to wash in cold water, and complains of palpitations of the heart. From me he went on to L.N. Tolstoi.

I left Taganrog on August 24. In Rostov I had supper with a school-friend, L. Volkenstein, the barrister, who has already a house in town and a villa in Kislovodsk [in the Caucasus]. I was in Nakhichevan–what a change! All the streets are lit by electric light. In Kislovodsk, at the funeral of General Safonov, I met A.I. Tchouprov [a famous economist], later I met A.N. Vesselovsky [littérateur] in the park. On the 28th I went on a hunting party with Baron Steingel, passed the night in Bermamut. It was cold with a violent wind.

2 September in Novorissisk. Steamer Alexander II. On the 3rd I arrived at Feodossia and stopped with Souvorin. I saw I.K. Aivasovsky [famous painter] who said to me: “You no longer come to see me, an old man.” In his opinion I ought to have paid him a visit. On the 16th in Kharkov, I was in the theatre at the performance of “The Dangers of Intelligence.” 17th at home: wonderful weather.

Vladimir Sloviov [famous philosopher] told me that he always carried an oak-gall in his trouser pocket,–in his opinion, it is a radical cure for piles.

October 17. Performance of my “Seagull” at the Alexandrinsky Theatre. It was not a success.

29th. I was at a meeting of the Zemstvo Council at Sezpukhovo.

On the 10th November I had a letter from A.F. Koni who says he liked my “Seagull” very much.

November 26th. A fire broke out in our house. Count S.I. Shakhovsky helped to put it out. When it was over, Sh. related that once, when a fire broke out in his house at night, he lifted a tank of water weighing 4-1/2 cwt. and poured the water on the flames.