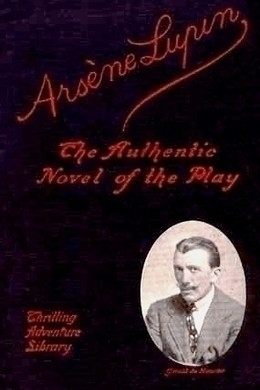 Novelization of the 4-Part Play

Germaine de Gournay-Martin, daughter of a very upper class family, just bought the castle Charmerace, and will finally, after seven years of engagement, be wedding penniless former owner, Jacques, Duke of Charmerace. Conversations quickly turn to the recent exploits’ of Arsène Lupin who did not hesitate to fly all collections of paintings by his future stepfather, for the viewer suspects quickly, Charmerace and Lupin are one. Contents: The Millionaire’s Daughter; The Coming Of The Charolais; Lupin’s Way; The Duke Intervenes; A Letter From Lupin; Again The Charolais; The Theft Of The Motor-cars; The Duke Arrives; M. Formery Opens The Inquiry; Guerchard Assists; The Family Arrives; The Theft Of The Pendant; Lupin Wires; Guerchard Picks Up The True Scent; The Examination Of Sonia; Victoire’s Slip; Sonia’s Escape; The Duke Stays; The Duke Goes; Lupin Comes Home; The Cutting Of The Telephone Wires; The Bargain; The End Of The Duel.

The rays of the September sun flooded the great halls of the old chateau of the Dukes of Charmerace, lighting up with their mellow glow the spoils of so many ages and many lands, jumbled together with the execrable taste which so often afflicts those whose only standard of value is money. The golden light warmed the panelled walls and old furniture to a dull lustre, and gave back to the fading gilt of the First Empire chairs and couches something of its old brightness. It illumined the long line of pictures on the walls, pictures of dead and gone Charmeraces, the stern or debonair faces of the men, soldiers, statesmen, dandies, the gentle or imperious faces of beautiful women. It flashed back from armour of brightly polished steel, and drew dull gleams from armour of bronze. The hues of rare porcelain, of the rich inlays of Oriental or Renaissance cabinets, mingled with the hues of the pictures, the tapestry, the Persian rugs about the polished floor to fill the hall with a rich glow of colour.

But of all the beautiful and precious things which the sun-rays warmed to a clearer beauty, the face of the girl who sat writing at a table in front of the long windows, which opened on to the centuries-old turf of the broad terrace, was the most beautiful and the most precious.

It was a delicate, almost frail, beauty. Her skin was clear with the transparent lustre of old porcelain, and her pale cheeks were only tinted with the pink of the faintest roses. Her straight nose was delicately cut, her rounded chin admirably moulded. A lover of beauty would have been at a loss whether more to admire her clear, germander eyes, so melting and so adorable, or the sensitive mouth, with its rather full lips, inviting all the kisses. But assuredly he would have been grieved by the perpetual air of sadness which rested on the beautiful face–the wistful melancholy of the Slav, deepened by something of personal misfortune and suffering.

Her face was framed by a mass of soft fair hair, shot with strands of gold where the sunlight fell on it; and little curls, rebellious to the comb, strayed over her white forehead, tiny feathers of gold.

She was addressing envelopes, and a long list of names lay on her left hand. When she had addressed an envelope, she slipped into it a wedding-card. On each was printed:

She wrote steadily on, adding envelope after envelope to the pile ready for the post, which rose in front of her. But now and again, when the flushed and laughing girls who were playing lawn-tennis on the terrace, raised their voices higher than usual as they called the score, and distracted her attention from her work, her gaze strayed through the open window and lingered on them wistfully; and as her eyes came back to her task she sighed with so faint a wistfulness that she hardly knew she sighed. Then a voice from the terrace cried, “Sonia! Sonia!”

“Tea! Order tea, will you?” cried the voice, a petulant voice, rather harsh to the ear.

“Very well, Mlle. Germaine,” said Sonia; and having finished addressing the envelope under her pen, she laid it on the pile ready to be posted, and, crossing the room to the old, wide fireplace, she rang the bell.

She stood by the fireplace a moment, restoring to its place a rose which had fallen from a vase on the mantelpiece; and her attitude, as with arms upraised she arranged the flowers, displayed the delightful line of a slender figure. As she let fall her arms to her side, a footman entered the room.

“Will you please bring the tea, Alfred,” she said in a charming voice of that pure, bell-like tone which has been Nature’s most precious gift to but a few of the greatest actresses.

“For how many, miss?” said Alfred.

“For four–unless your master has come back.”

“Oh, no; he’s not back yet, miss. He went in the car to Rennes to lunch; and it’s a good many miles away. He won’t be back for another hour.”

“And the Duke–he’s not back from his ride yet, is he?”

“Not yet, miss,” said Alfred, turning to go.

“One moment,” said Sonia. “Have all of you got your things packed for the journey to Paris? You will have to start soon, you know. Are all the maids ready?”

“Well, all the men are ready, I know, miss. But about the maids, miss, I can’t say. They’ve been bustling about all day; but it takes them longer than it does us.”

“Tell them to hurry up; and be as quick as you can with the tea, please,” said Sonia.

Alfred went out of the room; Sonia went back to the writing-table. She did not take up her pen; she took up one of the wedding-cards; and her lips moved slowly as she read it in a pondering depression.

The petulant, imperious voice broke in upon her musing.