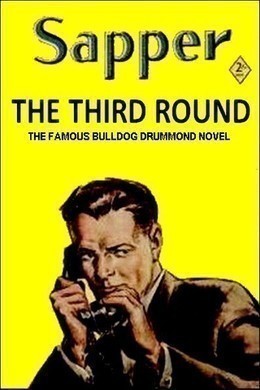 The death of Professor Goodman is officially recorded as a tragic accident, but at the inquest, no mention is made of his latest discovery–a miraculous new formula for manufacturing flawless diamonds at negligible cost, which strikes Captain Hugh “Bulldog” Drummond as rather strange. His suspicions are further aroused when he spots a member of the Metropolitan Diamond Syndicate at the inquest. Gradually, he untangles a sinister plot of greed and murder, which climaxes in a dramatic motorboat chase at Cowes and brings him face to face with his archenemy.

In which the Metropolitan Diamond Syndicate holds converse with Mr. Edward Blackton

With a sigh of pleasure Mr. Edward Blackton opened the windows of his balcony and leaned out, staring over the lake. Opposite, the mountains of Savoy rose steeply from the water; away to the left the Dent du Midi raised its crown of snow above the morning haze.

Below him the waters of the lake glittered and scintillated with a thousand fires. A steamer, with much blowing of sirens and reversing of paddle-wheels, had come to rest at a landing-stage hard by, and was taking on board a bevy of tourists, while the gulls circled round shrieking discordantly. For a while he watched them idly, noting the quickness with which the birds swooped and caught the bread as it was thrown into the air, long before it reached the water. He noted also how nearly all the food was secured by half a dozen of the gulls, whilst the others said a lot but got nothing. And suddenly Mr. Edward Blackton smiled.

“Like life, my dear,” he said, slipping his arm round the waist of a girl who had just joined him at the window. “It’s the fool who shouts in this world: the wise man says nothing and acts.”

The girl lit a cigarette thoughtfully, and sat down on the ledge of the balcony. For a while her eyes followed the steamer puffing fussily away with its load of sightseers and its attendant retinue of gulls: then she looked at the man standing beside her. Point by point she took him in: the clear blue eyes under the deep forehead, the aquiline nose, the firm mouth and chin. Calmly, dispassionately she noted the thick brown hair greying a little over the temples, the great depth of chest, and the strong, powerful hands: then she turned and looked once again at the disappearing steamer. But to the man’s surprise she gave a little sigh.

“No, not bored,” she answered. “Whatever may be your failings, mon ami, boring me is not one of them. I was just wondering what it would feel like if you and I were content to go on a paddle-wheel steamer with a Baedeker and a Kodak, and a paper bag full of bananas.”

“We will try to-morrow,” said the man, gravely lighting a cigar.

“It wouldn’t be any good,” laughed the girl. “Just once in a way we should probably love it. I meant I wonder what it would feel like if that was our life.”

“I know, carissima,” he answered gently. “I have sometimes wondered the same thing. I suppose there must be compensations in respectability, otherwise so many people wouldn’t be respectable. But I’m afraid it is one of those things that we shall never know.”

“I think it’s that,” said the girl, waving her hand towards the mountains opposite–“that has caused my mood. It’s all so perfectly lovely: the sky is just so wonderfully blue. And look at that sailing boat.”

She pointed to one of the big lake barges, with its two huge lateen sails creeping gently along in the centre of the lake. “It’s all so peaceful, and sometimes one wants peace.”

“True,” agreed the man; “one does. It’s just reaction, and we’ve been busy lately.” He rose and began to pace slowly up and down the balcony. “To be quite honest, I myself have once or twice thought recently that if I could pull off some really big coup–something, I mean, that ran into the millions–I would give things up.”

The girl smiled and shook her head.

“Don’t misunderstand me, my dear,” he went on. “I do not, suggest for a moment that we should settle down to a life of toping and ease. We could neither of us exist without employing our brains. But with really big money behind one, we should be in a position to employ our brains a little more legitimately, shall I say, than we are able to at present, and still get all the excitement we require.

“Take Drakshoff: that man controls three of the principal Governments of Europe. The general public don’t know it; the Governments themselves won’t admit it: but it’s true for all that. As you know, that little job I carried out for him in Germany averted a second revolution. He didn’t want one at the time, and so he called me in. And it cost him in all five million pounds. What was that to him?”

He shrugged his shoulders contemptuously.

“A mere flea-bite–a bagatelle. Why, with that man an odd million or two one way or the other wouldn’t be noticed in his pass-book.”

He paused and stared over the sunlit lake, while the girl watched him in silence.

“Given money as big as that, and a man can rule the world. Moreover, he can rule it without fear of consequences. He can have all the excitement he requires; he can wield all the power he desires–and have special posses of police to guard him. I’m afraid we don’t have many to guard us.”

The girl laughed and lit another cigarette.