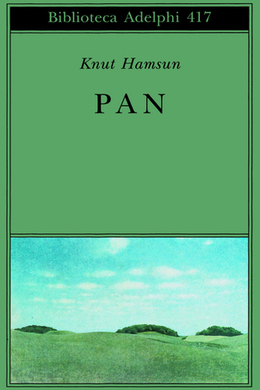 A multi-layered psychological masterpiece of human perversity and pride in the face of love and sensual attraction. Romantically awkward hunter, fisherman and nature-lover Lieutenant Thomas Glahn lives in a cabin away from society – alone, except for his dog and occasional interactions with the locals including the young and audacious Edwina, a free spirit who searches for a prince to conquer her, and has not yet met her match. The two commence a peculiar hot and cold relationship that evolves into a tragic psychological standoff. A classic literary probing of quirks and vulnerabilities of the psyche, set against the exquisite natural background of Norway.

These last few days I have been thinking and thinking of the Nordland summer, with its endless day. Sitting here thinking of that, and of a hut I lived in, and of the woods behind the hut. And writing things down, by way of passing the time; to amuse myself, no more. The time goes very slowly; I cannot get it to pass as quickly as I would, though I have nothing to sorrow for, and live as pleasantly as could be. I am well content withal, and my thirty years are no age to speak of.

A few days back someone sent me two feathers. Two bird’s feathers in a sheet of note-paper with a coronet, and fastened with a seal. Sent from a place a long way off; from one who need not have sent them back at all. That amused me too, those devilish green feathers.

And for the rest I have no troubles, unless for a touch of gout now and again in my left foot, from an old bullet-wound, healed long since.

Two years ago, I remember, the time passed quickly–beyond all comparison more quickly than time now. A summer was gone before I knew. Two years ago it was, in 1855. I will write of it just to amuse myself–of something that happened to me, or something I dreamed. Now, I have forgotten many things belonging to that time, by having scarcely thought of them since. But I remember that the nights were very light. And many things seemed curious and unnatural. Twelve months to the year–but night was like day, and never a star to be seen in the sky. And the people I met were strange, and of a different nature from those I had known before; sometimes a single night was enough to make them blossom out from childhood into the full of their glory, ripe and fully grown. No witchery in this; only I had never seen the like before. No.

In a white, roomy home down by the sea I met with one who busied my thoughts for a little time. I do not always think of her now; not any more. No; I have forgotten her. But I think of all the other things: the cry of the sea-birds, my hunting in the woods, my nights, and all the warm hours of that summer. After all, it was only by the merest accident I happened to meet her; save for that, she would never have been in my thoughts for a day.

From the hut where I lived, I could see a confusion of rocks and reefs and islets, and a little of the sea, and a bluish mountain peak or so; behind the hut was the forest. A huge forest it was; and I was glad and grateful beyond measure for the scent of roots and leaves, the thick smell of the fir-sap, that is like the smell of marrow. Only the forest could bring all things to calm within me; my mind was strong and at ease. Day after day I tramped over the wooded hills with Æsop at my side, and asked no more than leave to keep on going there day after day, though most of the ground was covered still with snow and soft slush. I had no company but Æsop; now it is Cora, but at that time it was Æsop, my dog that I afterwards shot.

Often in the evening, when I came back to the hut after being out shooting all day, I could feel that kindly, homely feeling trickling through me from head to foot–a pleasant little inward shivering. And I would talk to Æsop about it, saying how comfortable we were. “There, now we’ll get a fire going, and roast a bird on the hearth,” I would say; “what do you say to that?” And when it was done, and we had both fed, Æsop would slip away to his place behind the hearth, while I lit a pipe and lay down on the bench for a while, listening to the dead soughing of the trees. There was a slight breeze bearing down towards the hut, and I could hear quite clearly the clutter of a grouse far away on the ridge behind. Save for that, all was still.

And many a time I fell asleep there as I lay, just as I was, fully dressed and all, and did not wake till the seabirds began calling. And then, looking out of the window, I could see the big white buildings of the trading station, the landing stage at Girilund, the store where I used to get my bread. And I would lie there a while, wondering how I came to be there, in a hut on the fringe of a forest, away up in Nordland.

Then Æsop over by the hearth would shake out his long, slender body, rattling his collar, and yawning and wagging his tail, and I would jump up, after those three or four hours of sleep, fully rested and full of joy in everything … everything.

Many a night passed just that way.