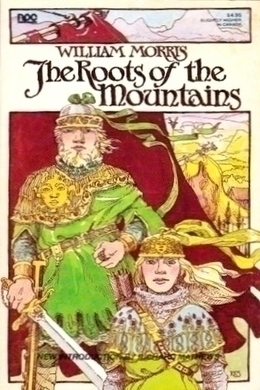 The Roots of the Mountains

Wherein is Told Somewhat of the Lives of the Men of Burgdale, Their Friends, Their Neighbours, Their Foemen, and Their Fellows in Arms

When Morris published this epic tale of great love and heroic battles he intended it as a kind of sequel to The House of the Wolfings, but this novel has far greater scope and depth. The time is later than that of Wolfings, and now the people are faced with enslaving Huns. Here, Morris explores more fully than ever before the roots of desire and consciousness by creating a reality more of the imagination, further removed from the world as we know it. Roots is the last of his romances to have ties with recorded history - bridge into the full-flown adult fantasy novels to follow. Said to have been one of the source materials upon which J. R. R. Tolkien drew when creating his beloved Lord of the Rings series, The Roots of the Mountains is a classic fantasy that takes place on an epic scale. Two civilizations are drawn together by a pair of star-crossed lovers – and by the threat of an encroaching enemy that could destroy the world as they know it.

Once upon a time amidst the mountains and hills and falling streams of a fair land there was a town or thorp in a certain valley. This was well-nigh encompassed by a wall of sheer cliffs; toward the East and the great mountains they drew together till they went near to meet, and left but a narrow path on either side of a stony stream that came rattling down into the Dale: toward the river at that end the hills lowered somewhat, though they still ended in sheer rocks; but up from it, and more especially on the north side, they swelled into great shoulders of land, then dipped a little, and rose again into the sides of huge fells clad with pine-woods, and cleft here and there by deep ghylls: thence again they rose higher and steeper, and ever higher till they drew dark and naked out of the woods to meet the snow-fields and ice-rivers of the high mountains. But that was far away from the pass by the little river into the valley; and the said river was no drain from the snow-fields white and thick with the grinding of the ice, but clear and bright were its waters that came from wells amidst the bare rocky heaths.

The upper end of the valley, where it first began to open out from the pass, was rugged and broken by rocks and ridges of water-borne stones, but presently it smoothed itself into mere grassy swellings and knolls, and at last into a fair and fertile plain swelling up into a green wave, as it were, against the rock-wall which encompassed it on all sides save where the river came gushing out of the strait pass at the east end, and where at the west end it poured itself out of the Dale toward the lowlands and the plain of the great river.

Now the valley was some ten miles of our measure from that place of the rocks and the stone-ridges, to where the faces of the hills drew somewhat anigh to the river again at the west, and then fell aback along the edge of the great plain; like as when ye fare a-sailing past two nesses of a river-mouth, and the main-sea lieth open before you.

Besides the river afore-mentioned, which men called the Weltering Water, there were other waters in the Dale. Near the eastern pass, entangled in the rocky ground was a deep tarn full of cold springs and about two acres in measure, and therefrom ran a stream which fell into the Weltering Water amidst the grassy knolls. Black seemed the waters of that tarn which on one side washed the rocks-wall of the Dale; ugly and aweful it seemed to men, and none knew what lay beneath its waters save black mis-shapen trouts that few cared to bring to net or angle: and it was called the Death-Tarn.

Other waters yet there were: here and there from the hills on both sides, but especially from the south side, came trickles of water that ran in pretty brooks down to the river; and some of these sprang bubbling up amidst the foot-mounds of the sheer-rocks; some had cleft a rugged and strait way through them, and came tumbling down into the Dale at diverse heights from their faces. But on the north side about halfway down the Dale, one stream somewhat bigger than the others, and dealing with softer ground, had cleft for itself a wider way; and the folk had laboured this way wider yet, till they had made them a road running north along the west side of the stream. Sooth to say, except for the strait pass along the river at the eastern end, and the wider pass at the western, they had no other way (save one of which a word anon) out of the Dale but such as mountain goats and bold cragsmen might take; and even of these but few.

This midway stream was called the Wildlake, and the way along it Wildlake’s Way, because it came to them out of the wood, which on that north side stretched away from nigh to the lip of the valley- wall up to the pine woods and the high fells on the east and north, and down to the plain country on the west and south.

Now when the Weltering Water came out of the rocky tangle near the pass, it was turned aside by the ground till it swung right up to the feet of the Southern crags; then it turned and slowly bent round again northward, and at last fairly doubled back on itself before it turned again to run westward; so that when, after its second double, it had come to flowing softly westward under the northern crags, it had cast two thirds of a girdle round about a space of land a little below the grassy knolls and tofts aforesaid; and there in that fair space between the folds of the Weltering Water stood the Thorp whereof the tale hath told.