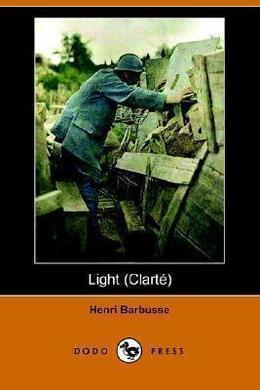 Light from the Abyss

Later novel by the French novelist, journalist and communist and author of Under Fire (Le Feu), which was based on his experiences during World War I and won the Prix Goncourt.

All the days of the week are alike, from their beginning to their end.

At seven in the evening one hears the clock strike gently, and then the instant tumult of the bell. I close the desk, wipe my pen, and put it down. I take my hat and muffler, after a glance at the mirror–a glance which shows me the regular oval of my face, my glossy hair and fine mustache. (It is obvious that I am rather more than a workman.) I put out the light and descend from my little glass-partitioned office. I cross the boiler-house, myself in the grip of the thronging, echoing peal which has set it free. From among the dark and hurrying crowd, which increases in the corridors and rolls down the stairways like a cloud, some passing voices cry to me, “Good-night, Monsieur Simon,” or, with less familiarity, “Good-night, Monsieur Paulin.” I answer here and there, and allow myself to be borne away by everybody else.

Outside, on the threshold of the porch which opens on the naked plain and its pallid horizons, one sees the squares and triangles of the factory, like a huge black background of the stage, and the tall extinguished chimney, whose only crown now is the cloud of falling night. Confusedly, the dark flood carries me away. Along the wall which faces the porch, women are waiting, like a curtain of shadow, which yields glimpses of their pale and expressionless faces. With nod or word we recognize each other from the mass. Couples are formed by the quick hooking of arms. All along the ghostly avenue one’s eyes follow the toilers’ scrambling flight.

The avenue is a wan track cut across the open fields. Its course is marked afar by lines of puny trees, sooty as snuffed candles; by telegraph posts and their long spider-webs; by bushes or by fences, which are like the skeletons of bushes. There are a few houses. Up yonder a strip of sky still shows palely yellow above the meager suburb where creeps the muddy crowd detached from the factory. The west wind sets quivering their overalls, blue or black or khaki, excites the woolly tails that flutter from muffled necks, scatters some evil odors, attacks the sightless faces so deep-drowned beneath the sky.

There are taverns anon which catch the eye. Their doors are closed, but their windows and fanlights shine like gold. Between the taverns rise the fronts of some old houses, tenantless and hollow; others, in ruins, cut into this gloomy valley of the homes of men with notches of sky. The iron-shod feet all around me on the hard road sound like the heavy rolling of drums, and then on the paved footpath like dragged chains. It is in vain that I walk with head bent–my own footsteps are lost in the rest, and I cannot hear them.

We hurry, as we do every evening. At that spot in the inky landscape where a tall and twisted tree seems to writhe as if it had a soul, we begin suddenly to descend, our feet plunging forward. Down below we see the lights of Viviers sparkle. These men, whose day is worn out, stride towards those earthly stars. One hope is like another in the evening, as one weariness is like another; we are all alike. I, also. I go towards my light, like all the others, as on every evening.

When we have descended for a long time the gradient ends, the avenue flattens out like a river, and widens as it pierces the town. Through the latticed boughs of the old plane trees–still naked on this last day of March–one glimpses the workmen’s houses, upright in space, hazy and fantastic chessboards, with squares of light dabbed on in places, or like vertical cliffs in which our swarming is absorbed. Scattering among the twilight colonnade of the trees, these people engulf themselves in the heaped-up lodgings and rooms; they flow together in the cavity of doors; they plunge into the houses; and there they are vaguely turned into lights.

I continue to walk, surrounded by several companions who are foremen and clerks, for I do not associate with the workmen. Then there are handshakes, and I go on alone.

Some dimly seen wayfarers disappear; the sounds of sliding locks and closing shutters are heard here and there; the houses have shut themselves up, the night-bound town becomes a desert profound. I can hear nothing now but my own footfall.