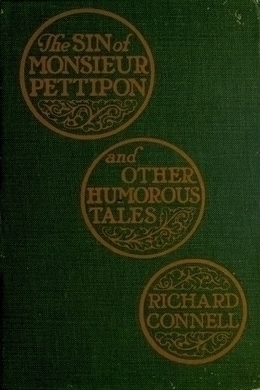 The Sin of Monsieur Pettipon

A collection of humorous short stories with a diverse set of characters and settings from the vivid imaginations of Connell, that will remind of you The Twilight Zone, with critiques against idle curiosity, arrogance, superficiality, and uninformed decision-making.

Moistening the tip of his immaculate handkerchief, M. Alphonse Marie Louis Camille Pettipon deftly and daintily rubbed an almost imperceptible speck of dust from the mirror in Stateroom C 341 of the liner Voltaire of the Paris-New York Steamship Company, and a little sigh of happiness fluttered his double chins.

He set about his task of making up the berths in the stateroom with the air of a high priest performing a sacerdotal ritual. His big pink hands gently smoothed the crinkles from the linen pillow cases; the woolen blankets he arranged in neat, folded triangles and stood off to survey the effect as an artist might. And, indeed, Monsieur Pettipon considered himself an artist.

To him the art of being a steward was just as estimable as the art of being a poet; he was a Shelley of the dustpan; a Keats of the sheets. To him the making up of a berth in one of the cabins he tended was a sonnet; an orange pip or burnt match on the floor was as intolerable as a false quantity. Few poets took as much pains with their pens as he did with his whisk. He loved his work with a zeal almost fanatical.

Lowering himself to his plump knees, Monsieur Pettipon swept the floor with a busy brush, humming the while a little Provence song:

As he sang the series of “Oo la las” he kept time with strokes of his brush, one stroke to each “la,” until a microscope could not have detected the smallest crumb of foreign matter on the red carpet.

Then he hoisted himself wheezily to his feet and with critical eye examined the cabin. It was perfection. Once more he sighed the happy little sigh of work well done; then he gathered up his brush, his dustpan and his collection of little cleaning rags and entered the stateroom next door, where he expertly set about making things tidy to an accompaniment of “Oo la las.”

Suddenly in the midst of a “la la,” he broke off, and his wide brow puckered as an outward sign that some disquieting thought was stirring beneath it. He was not going to be able to buy his little son Napoleon a violin this trip either.

The look of contentment he usually wore while doing the work he loved gave way to small furrows of worry. He was saying silently to himself: “Ah, Alphonse, old boy, this violin situation is getting serious. Your little Napoleon is thirteen, and it is at that tender age that virtuosos begin to find themselves. And what is a virtuoso without a violin? You should be a steward of the first class, old turnip, where each trip you would be tipped the price of a violin; on second-class tips one cannot buy even mouth organs. Alas!”

Each trip now, for months, Monsieur Pettipon had said to his wife as he left his tiny flat in the Rue Dauphine, “This time, Thérèse, I will have a millionaire. He will see with what care I smooth his sheets and pick the banana skins from the floor, and he will say, ‘This Pettipon is not such a bad lot. I will give him twenty dollars.’ Or he will write to M. Victor Ronssoy about me, and Monsieur Ronssoy will order the captain to order the chief steward to make me a steward of the first class, and then, my dear, I will buy a violin the most wonderful for our little cabbage.”

To which the practical Thérèse would reply, “Millionaires do not travel second class.”

And Monsieur Pettipon would smile hopefully and say “Who can tell?” although he knew perfectly well that she was right.

And Thérèse would pick a nonexistent hair from the worn collar of his coat and remark, “Oh, if you were only a steward of the first class, my Alphonse!”

“Patience, my dear Thérèse, patience,” he would say, secretly glowing as men do when their life ambition is touched on.

“Patience? Patience, indeed!” she would exclaim. “Have you not crossed on the Voltaire a hundred and twenty-seven times? Has a speck of dust ever been found in one of your cabins? You should have been promoted long ago. You are being done a dirtiness, Monsieur Pettipon.”

And he would march off to his ship, wagging his big head.