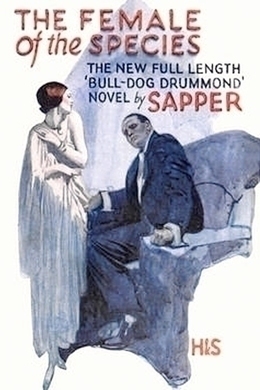 The Female of the Species

Bulldog Drummond has slain his archenemy, Carl Peterson, but Peterson’s mistress lives on and is intent on revenge. Drummond’s wife vanishes, followed by a series of vicious traps set by a malicious adversary, which lead to a hair-raising chase across England, to a sinister house and a fantastic torture chamber modeled on Stonehenge, with its legend of human sacrifice.

Even now, after three months’ calm thought, I sometimes feel that I must have dreamed the whole thing. I say to myself that this is England: that I am sitting at lunch in my club hoping that that gluttonous lawyer Seybourne will not take all the best part of the Stilton: that unless I get a move on I shall be very late at Lord’s. I say all that just as I always used to say it—particularly about Seybourne. And then it suddenly comes over me—the events of those amazing days.

I don’t suppose anybody will believe me: I wouldn’t believe the story myself if somebody else told it to me. As I say, I sometimes think it must be a dream. And then I turn back my left sleeve nearly to the elbow and look at a three-inch scar, still red and angry, though it’s healing nicely now. And I know it was no dream.

Was it a joke? If so, it was the grimmest and most desperate jest that has ever been cracked, and one wherein the humour was difficult to find. Moreover, it was a joke that would have brought the propounder of it to the gallows—had we but been able to catch her. For there was a woman at the bottom of it, and women can suffer the death penalty in England for murder.

No it was no dream: no jest. It was grim, stern reality played for a stake sufficient to crack the nerve of the principal player on our side had he been possessed of nerves to crack. A game played against time: a game where one mistake might have proved fatal.

Personally I am a peace-loving individual of mild appearance: I like my rubber of bridge at the club and my round of golf: I am not averse to letting people know that I was wounded in the leg in France. Moreover, I fail to see why I should gratuitously add the information that I was in the horse lines at the time, and Heaven alone knows where the bullet came from. I mention these points merely to show that I am just a very ordinary sort of person, and not at all of the type which seems to attract adventure. In fact, until that amazing Whitsun, the only thing in any way out of the ordinary which had ever happened to me was when I, on one occasion, tried to stop a runaway horse. And the annoying thing then was that the driver assured me he had the horse under control. Three weeks had elapsed, and I was still in hospital, so I didn’t argue the point.

The truth is that I am not one of those enviable men who are at their best when in a tight corner, or when confronted with the need for immediate action. If, as I read somewhere once, men consist of two classes—those who can stop a dog fight and those who can’t—honesty compels me to admit that I belong to the latter. In fact, put in a nutshell, I am a rabbit.

And yet I wouldn’t have missed that adventure for anything. I can’t flatter myself that I did very much: indeed, there were times when I fear I was merely in the way. For all that, never once did a single member of the extraordinary bunch of men who were playing on our side say any word of reproach or irritation. They never let me feel that I was a passenger even when the strain was greatest.

However, enough of this preamble. I will start at the beginning. For many years it has been my custom to spend a few days round Whitsuntide with some old friends of mine called Tracey. They have a charming house not far from Pangbourne—Elizabethan, and standing in delightful grounds. There is generally a small party—perhaps a dozen in all—and I may say that the keyword to the atmosphere of the house is peace. It may be that I am a little old-fashioned, but the pleasure to be derived from what is sometimes described as an evening’s jolly seems to me to be overrated.

As usual I went to them this year, arriving on the Thursday before Whitsuntide. The motor met me at the station, and, having shaken Jenkins, the chauffeur, by the hand, I got in. Somewhat to my surprise, he did not at once drive off: he appeared to be waiting for someone else.

“Captain Drummond, sir,” he said to me, “who is stopping at the house, came down to get a paper.”

“Captain Drummond, Jenkins,” I mused. “Do I know him?”

“I think not, sir,” he answered, and it seemed to me that a very faint smile twitched round his lips. In fact, there was a sort of air of expectancy about Jenkins—excitement almost—that was most unusual. Jenkins I have always regarded as a model servant.

“Five to one, my trusty lad. That’s better than breaking your false teeth on a plum stone.”

I turned at this somewhat astounding utterance and regarded the speaker. He was still immersed in the paper, and for the moment I couldn’t see his face.

“Put anything on Moongazer?”

“‘Alf a dollar each way, sir,” said Jenkins, so far forgetting himself as to suck his teeth in his excitement.

“You’ll get your money back. Second at fours. That’s not so bad for the old firm.”