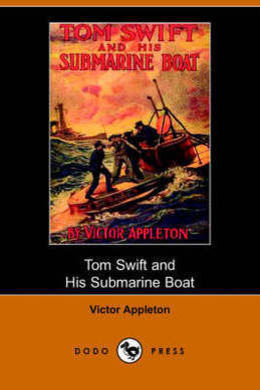 Tom Swift and his Submarine Boat

Under the Ocean for Sunken Treasure

Tom Swift’s father has completed an experimental submarine design that he expects to test in an upcoming government sponsored race and trial. However, when news surfaces of a ship, which was full of gold, that sank off the coast of Uruguay, Tom and his father quickly change course. The treasure lies on the bed of the ocean, three miles below the surface, and only the Swift submarine can make the dive - or so they thought! Soon a rival emerges from the inky depths and a battle ensues that puts the crew in peril of sinking beneath the waves forever. (source: Wikipedia)

There was a rushing, whizzing, throbbing noise in the air. A great body, like that of some immense bird, sailed along, casting a grotesque shadow on the ground below. An elderly man, who was seated on the porch of a large house, started to his feet in alarm.

“Gracious goodness! What was that, Mrs. Baggert?” he called to a motherly-looking woman who stood in the doorway. “What happened?”

“Nothing much, Mr. Swift,” was the calm reply “I think that was Tom and Mr. Sharp in their airship, that’s all. I didn’t see it, but the noise sounded like that of the Red Cloud.”

“Of course! To be sure!” exclaimed Mr. Barton Swift, the well-known inventor, as he started down the path in order to get a good view of the air, unobstructed by the trees. “Yes, there they are,” he added. “That’s the airship, but I didn’t expect them back so soon. They must have made good time from Shopton. I wonder if anything can be the matter that they hurried so?”

He gazed aloft toward where a queerly-shaped machine was circling about nearly five hundred feet in the air, for the craft, after swooping down close to the house, had ascended and was now hovering just above the line of breakers that marked the New Jersey seacoast, where Mr. Swift had taken up a temporary residence.

“Don’t begin worrying, Mr. Swift,” advised Mrs. Baggert, the housekeeper. “You’ve got too much to do, if you get that new boat done, to worry.”

“That’s so. I must not worry. But I wish Tom and Mr. Sharp would land, for I want to talk to them.”

As if the occupants of the airship had heard the words of the aged inventor, they headed their craft toward earth. The combined aeroplane and dirigible balloon, a most wonderful traveler of the air, swung around, and then, with the deflection rudders slanted downward, came on with a rush. When near the landing place, just at the side of the house, the motor was stopped, and the gas, with a hissing noise, rushed into the red aluminum container. This immediately made the ship more buoyant and it landed almost as gently as a feather.

No sooner had the wheels which formed the lower part of the craft touched the ground than there leaped from the cabin of the Red Cloud a young man.

“Well, dad!” he exclaimed. “Here we are again, safe and sound. Made a record, too. Touched ninety miles an hour at times–didn’t we, Mr. Sharp?”

“That’s what,” agreed a tall, thin, dark-complexioned man, who followed Tom Swift more leisurely in his exit from the cabin. Mr. Sharp, a veteran aeronaut, stopped to fasten guy ropes from the airship to strong stakes driven into the ground.

“And we’d have done better, only we struck a hard wind against us about two miles up in the air, which delayed us,” went on Tom. “Did you hear us coming, dad?”

“Yes, and it startled him,” put in Mrs. Baggert. “I guess he wasn’t expecting you.”

“Oh, well, I shouldn’t have been so alarmed, only I was thinking deeply about a certain change I am going to make in the submarine, Tom. I was day-dreaming, I think, when your ship whizzed through the air. But tell me, did you find everything all right at Shopton? No signs of any of those scoundrels of the Happy Harry gang having been around?” and Mr. Swift looked anxiously at his son.

“Not a sign, dad,” replied Tom quickly. “Everything was all right. We brought the things you wanted. They’re in the airship. Oh, but it was a fine trip. I’d like to take another right out to sea.”

“First I think we’d better put the airship away,” advised Mr. Sharp. “I don’t just like the looks of the weather, and, besides, if we leave the ship exposed we’ll be sure to have a crowd around sooner or later, and we don’t want that.”

“No, indeed,” remarked the aged inventor hastily. “I don’t want people prying around the submarine shed. By all means put the airship away, and then come into the shop.”

In spite of its great size the aeroplane was easily wheeled along by Tom and Mr. Sharp, for the gas in the container made it so buoyant that it barely touched the earth. A little more of the powerful vapor and the Red Cloud would have risen by itself. In a few minutes the wonderful craft, of which my readers have been told in detail in a previous volume, was safely housed in a large tent, which was securely fastened.