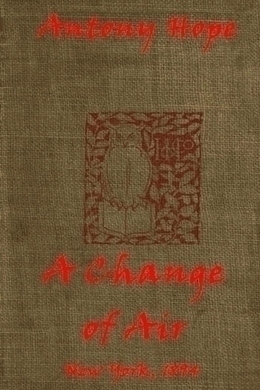 A Change of Air

From the author of The Prisoner of Zenda. A highly clever performance with little touches that recall both Balzac and Meredith…is endowed with exceeding originality. In this 1893 novel, a young poet, Dale Bannister, suddenly finds himself possessed of fame and fortune. He moves to the town of Denborough, where he acquires an enemy, Squire Delane, and an equally unwelcome acolyte, Dr. Roberts.

When the Great King, that mirror of a majesty whereof modern times have robbed the world, recoiled aghast from the threatened indignity of having to wait, he laid his finger with a true touch on a characteristic incident of the lot of common men, from which it was seemly that the state of God’s Vicegerents should be free. It was a small matter, no doubt, a thing of manners merely, and etiquette; yet manners and etiquette are first the shadowed expression of facts and then the survival of them; the reverence once paid to power, and now accorded, in a strange mixture of chivalry and calculation, to mere place whence power has fled. The day of vicegerents is gone, and the day of officers has come; and it is not unknown that officers should have to wait, or even–such is the insolence, no longer of office, but of those who give it–should altogether go without. Yet, although everybody has now to wait, everybody has not to wait the same length of time. For example, a genius needs not wait so long for what he wants as a fool–unless, as chances now and then, he be both a genius and a fool, when probably his waiting will be utterly without end.

In a small flat in Chelsea, very high toward heaven, there sat one evening in the summer, two young men and a genius; and the younger of the young men, whose name was Arthur Angell, said discontentedly to the genius:

“The brute only sent me ten and sixpence. What did you get for yours?”

The genius blushed and murmured apologetically:

“That agent chap I’ve sold myself to got twenty pounds for it.”

The second young man, who was not so young, being, in fact, well turned of thirty, and growing bald, took his pipe out of his mouth, and, pointing the stem first at the genius, then at Arthur Angell, and lastly, like a knife, at his own breast, said:

“Pounds–shillings–and pence. He sent me nothing at all.”

A pause followed, and the genius began:

“Look here, you fellows—-“ But Philip Hume went on: “Ten and sixpence is a good sum of money, a comfortable sum of money, and, my dear Arthur, I should say the full value of your poem. As to Dale’s poem, who knows the value of Dale’s poem? By what rod shall you measure—-“ He broke off with a laugh at Dale’s gesture of protest.

“I’m making the deuce of a lot of money,” said Dale in an awestruck tone. “It’s rolling in. I don’t know what to do with it.”

“Littlehill will swallow it,” said Philip.

“You don’t mean that he sticks to that idea?” exclaimed Arthur. “You don’t, do you, Dale?”

“It’ll end in our losing you,” prophesied Arthur gloomily.

“Nonsense!” said Dale, flushing a little. “It’ll end in nothing of the sort. I’ve only taken the house for a year.”

“It sounds a villa all over,” he said.

“Is there any difference?” asked Arthur scornfully.

“All the difference,” said Philip; “as you would know if you moved in anything approaching respectable circles.”

“I’m glad I don’t,” said Arthur. “What will respectable circles say to ‘The Clarion,’ eh, Dale?”

“Who cares what they say?” laughed Dale. “They seem to buy it.”

Arthur looked at him with revengeful eye, and suddenly inquired.

“That’s just the delightful part of it,” answered Dale eagerly. “Nellie’s been seedy ever so long, you know. She was ordered perfect rest and country air. But it didn’t run to it.”

“It never ran to anything here,” said Philip in a tone of dispassionate acquiescence in facts, “till you became famous.”

“Now I can help!” pursued Dale. “She and Mrs. Hodge are coming to pay me a long visit. Of course, Phil’s going to be there permanently. You’ll come too, Arthur?”

At first Arthur Angell said he would not go near a villa; he could not breath in a villa; or sleep quiet o’ nights in a villa; but presently he relented.

“I can’t stand it for long, though,” he said. “Still, I’m glad you’re going to have Nellie there. She’d have missed you awfully. When do you go?”

Arthur shook his head again, as he put on his hat.

Dale waited till the door was closed behind his guest, and then laughed good-humoredly.

“I like old Arthur,” he said. “He’s so keen and in earnest about it. But it’s all bosh. What difference can it make whether I live in London or the country? And it’s only for a little while.”

“He begins to include you in the well-to-do classes, and suspects you accordingly,” replied Philip.