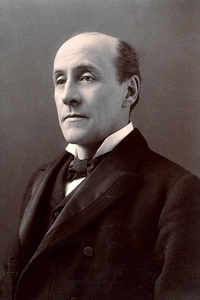 Sir Anthony Hope Hawkins, better known as Anthony Hope, was an English novelist and playwright. He was a prolific writer, especially of adventure novels but he is remembered best for only two books: The Prisoner of Zenda and its sequel Rupert of Hentzau. These works, minor classics of English literature, are set in the contemporaneous fictional country of Ruritania and spawned the genre known as Ruritanian romance. Zenda has inspired many adaptations, most notably the 1937 Hollywood movie of the same name. (source: Wikipedia)

From the author of The Prisoner of Zenda. A highly clever performance with little touches that recall both Balzac and Meredith…is endowed with exceeding...read more »

Rupert of Hentzau is the dark sequel to The Prisoner of Zenda. Full of humor and swashbuckling feats of heroism, the tale is also a satire on the politi...read more »

The Heart of Princess Osra is part of Anthony Hope’s trilogy of novels set in the fictional country of Ruritania and which spawned the genre of Ruritani...read more »

If historically tinged action-adventure is your genre of choice, hang on to your hat – you’re in for a wild ride. In The Prisoner of Zenda, Anthony Hope...read more »