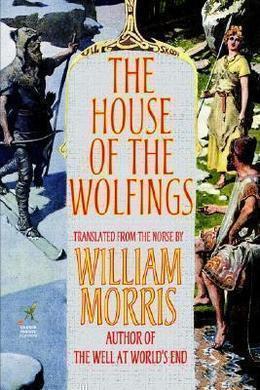 The House of the Wolfings

And a Tale of all the Kindreds of the Mark

The first step toward the characteristic large-scale fantasies which have had such influence on the genre …is The House of the Wolfings. Here the setting is quasi-historical: a European Saxon community is resisting the decadent advances of late Imperial Rome. The romantic-supernatural story contains a large admixture of verse. Indeed, Morris’s chief contribution to the book is his beautiful prose and poetry, for his version of the story is actually a collaboration with Norse scholar Eirikr Magnusson, who provided a literal translation of the original text, which Morris then reset as prose and poetry. J.R.R. Tolkien wrote of its influence on Lord of the Rings that, “The Dead Marshes and the approaches to the Morannon owe … more to William Morris and his Huns and Romans, as in The House of the Wolfings or The Roots of the Mountains.”

The tale tells that in times long past there was a dwelling of men beside a great wood. Before it lay a plain, not very great, but which was, as it were, an isle in the sea of woodland, since even when you stood on the flat ground, you could see trees everywhere in the offing, though as for hills, you could scarce say that there were any; only swellings-up of the earth here and there, like the upheavings of the water that one sees at whiles going on amidst the eddies of a swift but deep stream.

On either side, to right and left the tree-girdle reached out toward the blue distance, thick close and unsundered, save where it and the plain which it begirdled was cleft amidmost by a river about as wide as the Thames at Sheene when the flood-tide is at its highest, but so swift and full of eddies, that it gave token of mountains not so far distant, though they were hidden. On each side moreover of the stream of this river was a wide space of stones, great and little, and in most places above this stony waste were banks of a few feet high, showing where the yearly winter flood was most commonly stayed.

You must know that this great clearing in the woodland was not a matter of haphazard; though the river had driven a road whereby men might fare on each side of its hurrying stream. It was men who had made that Isle in the woodland.

For many generations the folk that now dwelt there had learned the craft of iron-founding, so that they had no lack of wares of iron and steel, whether they were tools of handicraft or weapons for hunting and for war. It was the men of the Folk, who coming adown by the river-side had made that clearing. The tale tells not whence they came, but belike from the dales of the distant mountains, and from dales and mountains and plains further aloof and yet further.

Anyhow they came adown the river; on its waters on rafts, by its shores in wains or bestriding their horses or their kine, or afoot, till they had a mind to abide; and there as it fell they stayed their travel, and spread from each side of the river, and fought with the wood and its wild things, that they might make to themselves a dwelling-place on the face of the earth.

So they cut down the trees, and burned their stumps that the grass might grow sweet for their kine and sheep and horses; and they diked the river where need was all through the plain, and far up into the wild-wood to bridle the winter floods: and they made them boats to ferry them over, and to float down stream and track up-stream: they fished the river’s eddies also with net and with line; and drew drift from out of it of far- travelled wood and other matters; and the gravel of its shallows they washed for gold; and it became their friend, and they loved it, and gave it a name, and called it the Dusky, and the Glassy, and the Mirkwood-water; for the names of it changed with the generations of man.

There then in the clearing of the wood that for many years grew greater yearly they drave their beasts to pasture in the new-made meadows, where year by year the grass grew sweeter as the sun shone on it and the standing waters went from it; and now in the year whereof the tale telleth it was a fair and smiling plain, and no folk might have a better meadow.

But long before that had they learned the craft of tillage and taken heed to the acres and begun to grow wheat and rye thereon round about their roofs; the spade came into their hands, and they bethought them of the plough-share, and the tillage spread and grew, and there was no lack of bread.

In such wise that Folk had made an island amidst of the Mirkwood, and established a home there, and upheld it with manifold toil too long to tell of. And from the beginning this clearing in the wood they called the Mid-mark: for you shall know that men might journey up and down the Mirkwood-water, and half a day’s ride up or down they would come on another clearing or island in the woods, and these were the Upper-mark and the Nether-mark: and all these three were inhabited by men of one folk and one kindred, which was called the Mark-men, though of many branches was that stem of folk, who bore divers signs in battle and at the council whereby they might be known.

Now in the Mid-mark itself were many Houses of men; for by that word had they called for generations those who dwelt together under one token of kinship. The river ran from South to North, and both on the East side and on the West were there Houses of the Folk, and their habitations were shouldered up nigh unto the wood, so that ever betwixt them and the river was there a space of tillage and pasture.