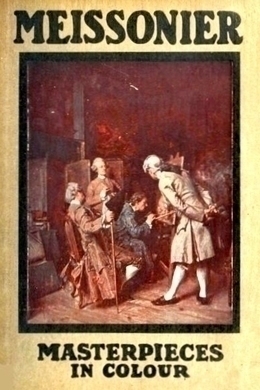 The whole artist, whose work we are about to study side by side with his life, is summed up in this anecdote. It reveals one of the most typical sides of his temperament, and, consequently, of his talent: a constant and scrupulous endeavour, maintained even at the price of sacrifices that would seem excessive to the layman, to interpret nature precisely as she is. It was this noble ambition–and we shall find other examples of it in the course of an artistic career in which it was the dominant note–that made him say to his pupils, with a conviction that commanded respect: “If I should sketch a horse from memory I should feel that I had been guilty of an insult to nature!” And it is because he conceived his ideal after this fashion that this unerring painter of so many military types and scenes never attempted to picture skirmishes or battles. It was not that he did not want to, or had not cherished the dream of doing so. But he had never seen a battle; and a battle is a thing that cannot be reconstructed, like a marching column or a detail of camp life. Accordingly he painted none, because he decided, with a certain loftiness, _that he did not really know what a battle was! Let us keep this attitude of mind before us, and even underscore it in our memory. For this alone, in a vague way, would suffice to characterize the artist with whom we are concerned; and his whole long, rich, and fruitful career may be summed up as a successful and varied application of one great principle: devout and inflexible respect for reality.

When Jean-Louis-Ernest Meissonier was born at Lyons in 1815, under the fading light of an Imperial sunset, these were scarcely the ideas that predominated in the national school of French art. Pictorial art, to confine ourselves to that, had, both before and during the First Empire, achieved at most a lumbering and trammelled flight; and the influence of antiquity, so perceptible in the language as well as in the manners and fashions at the close of the Eighteenth Century, served only to confine the inspiration of artists more strictly within the bounds of classic tradition. Roman characters, Roman costumes, Roman virtues,–such was the ideal to which each debutant who did not revolt openly must make surrender! To be sure, the commanding figure of David gave a magnificent prestige to this rather cold and dishearteningly classic programme. But, like all great artists, David was exceptional; and he stands today as the only one who, in an epoch sadly poor in genius, produced a host of living masterpieces, to swell the lists of a school so artificial that it would now be forgotten, save as an echo of his name. It is true that, by way of ransom, he spent much time in painting vast canvases that today hold but a small place in his life work.

On the threshold of the Nineteenth Century, in 1799, Eugène Delacroix was born. It was he who brought a new spirit into French painting and, single-handed, wrought a great revolution.

Such is not destined to be the rôle of Meissonier! His was neither so tragic a struggle, nor so immense a triumph. Unlike Delacroix, he did not restore the Beautiful nor hand down new forms to glory. He succeeded none the less in inscribing his name in modest yet precise characters–that will long remain legible–upon the marble of the temple.

How did the artist get his start? According to the monotonous and mournful formula, “after a hard struggle.” The lives of all beloved and admired artists have this in common with fairy tales: they always begin badly and end happily (unluckily, they sometimes end a long time after the death of the principal hero!).

The father of Meissonier was a dealer in colonial products and chemicals, and kept a drug and provision shop in the Rue des Ecouffes. Beneath the low ceiling of this shop and between walls lined with drawers, bearing strange labels, the childhood of Jean-Louis-Ernest was passed. His mother was a fragile woman. We are told further that she was sensitive to music and that she had learned to paint on porcelain and to make miniatures.

Are we at liberty to attribute to the tender and brief contact of that mother, who died so young, with the life of her child, the origin of his artistic vocation? It is pleasant at least to fancy so and to try to believe it, even though we are told that parents bequeath to their children, not a vocation–a mysterious gift, of unknown origin–but rather a certain number of necessary aptitudes and qualities, which will enable them to profit by the gift, if perchance it falls to them from Heaven.

Yet the fact remains that in the depths of a cupboard, in the house on the Rue des Ecouffes, there lay the paint-box which Mme. Meissonier once used, while taking miniature lessons from the authoritative hands of Mme. Jacottot. As joyously as other children would have appropriated a jar of jam, the boy possessed himself of the magic box, and on that selfsame day entered, with stumbling fingers, upon the laborious mission which was destined to cease only with his life.

He was not a very good student. A report has been preserved of his standing in a school in the Rue des Francs-Bourgeois, at Paris, where his later childhood was passed. In this document the proper authorities alleged that the pupil, Ernest Meissonier, showed “too marked a tendency to draw sketches in his copy-books, instead of paying attention to his teachers.”

The said tendency did not fail to awaken anxiety in M. Meissonier, the father. It should be remembered that, for some years previous, the question of painting in France had been taking on a rather bitter tone. The romantic school was entering boldly into the lists, and among its champions were some who distinguished themselves less by their works than by their long beards and the public challenge they flung at their traditional enemy, the phalanx of David’s pupils. And among the latter, it must be owned, the majority made no answer beyond a disdainful silence and some mediocre paintings,–with just one single exception: the admirable, undoubted, impeccable exception of the great Jean-Dominique Ingres.