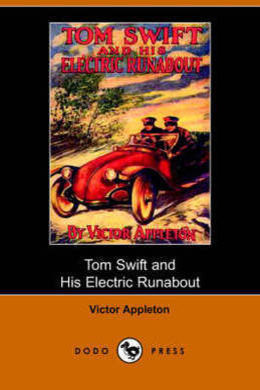 Tom Swift and his Electric Runabout

The Speediest Car on the Road

Tom Swift enters an upcoming race with his specially-designed prototype electric race car, but as he makes the final preparations and adjustments, days before the race, he discovers a plot that would bankrupt not only his family, but also everyone else that relies on the local bank (which is the target of a nefarious bank-run scheme). Tom must solve the mystery and stop the criminals behind the plot before he’ll test himself on a 500 mile race against some of the best cars and skilled drivers in the United States. (source: Wikipedia)

“Father,” exclaimed Tom Swift, looking up from a paper he was reading, “I think I can win that prize!”

“What prize is that?” inquired the aged inventor, gazing away from a drawing of a complicated machine, and pausing in his task of making some intricate calculations. “You don’t mean to say, Tom, that you’re going to have a try for a government prize for a submarine, after all.”

“No, not a submarine prize, dad,” and the youth laughed. “Though our Advance would take the prize away from almost any other under-water boat, I imagine. No, it’s another prize I’m thinking about.”

“Well, I see by this paper that the Touring Club of America has offered three thousand dollars for the speediest electric car. The tests are to come off this fall, on a new and specially built track on Long Island, and it’s to be an endurance contest for twenty-four hours, or a race for distance, they haven’t yet decided. But I’m going to have a try for it, dad, and, besides winning the prize, I think I’ll take Andy Foger down a peg.

“Oh, nothing more than usual. He’s always mean, and looking for a chance to make trouble for me, but I didn’t refer to anything special. He has a new auto, you know, and he boasts that it’s the fastest one in this country. I’ll show him that it isn’t, for I’m going to win this prize with the speediest car on the road.”

“But, Tom, you haven’t any automobile, you know,” and Mr. Swift looked anxiously at his son, who was smiling confidently. “You can’t be going to make your motor-cycle into an auto; are you?”

“Then how are you going to take part in the prize contest? Besides, electric cars, as far as I know, aren’t specially speedy.”

“I know it, and one reason why this club has arranged the contest is to improve the quality of electric automobiles. I’m going to build an electric runabout, dad.”

“An electric runabout? But it will have to be operated with a storage battery, Tom, and you haven’t–”

“I guess you’re going to say I haven’t any storage battery, dad,” interrupted Mr. Swift’s son. “Well, I haven’t yet, but I’m going to have one. I’ve been working on–”

“Oh, ho!” exclaimed the aged inventor with a laugh. “So that’s what you’ve been tinkering over these last few weeks, eh, Tom? I suspected it was some new invention, but I didn’t suppose it was that. Well, how are you coming on with it?”

“Pretty good, I think. I’ve got a new idea for a battery, and I made an experimental one. I gave it some pretty severe tests, and it worked fine.”

“But you haven’t tried it out in a car yet, over rough roads, and under severe conditions have you?”

“No, I haven’t had a chance. In fact, when I invented the battery I had no idea of using it on a car I thought it might answer for commercial purposes, or for storing a current generated by windmills. But when I read that account in the papers of the Touring Club, offering a prize for the best electric car, it occurred to me that I might put my battery into an auto, and win.”

“Hum,” remarked Mr. Swift musingly. “I don’t take much stock in electric autos, Tom. Gasolene seems to be the best, or perhaps steam, generated by gasolene. I’m afraid you’ll be disappointed. All the electric runabouts I ever saw, while they were very nice cars, didn’t seem able to go so very fast, or very far.”

“That’s true, but it’s because they didn’t have the right kind of a battery. You know an electric locomotive can make pretty good speed, Dad. Over a hundred miles an hour in tests.”

“Yes, but they don’t run by storage batteries. They have a third rail, and powerful motors,” and Mr. Swift looked quizzically at his son. He loved to argue with him, for he said it made Tom think, and often the two would thus thresh out some knotty point of an invention, to the interests of both.

“Of course, Dad, there is a good deal of theory in what I’m thinking of,” the lad admitted. “But it does seem to me that if you put the right kind of a battery into an automobile, it could scoot along pretty lively. Look what speed a trolley car can make.”

“Yes, Tom, but there again they get their power from an overhead wire.”

“Some of them don’t. There’s a new storage battery been invented by a New Jersey man, which does as well as the third rail or the overhead wire. It was after reading about his battery that I thought of a plan for mine. It isn’t anything like his; perhaps not as good in some ways, but, for what I want, it is better in some respects, I think. For one thing it can be recharged very quickly.”