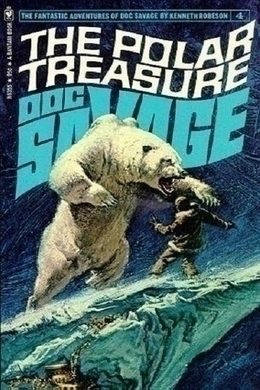 Menaced by “the strange clicking danger,” Doc Savage and his fabulous five-man army take a desperate journey on a polar submarine in search of a missing ocean liner and a dazzling treasure. Their only clue is a map tattooed on the back of a blind violinist. Awaiting them at their destination is the most terrible killer the Arctic has ever known.

This was evident from the furtive manner of the small, flat-chested man who cowered in the shadows. He quaked like a terrified rabbit at each strange sound.

Once a cop came along the alleylike side street, slapping big feet heartily on the walk, twiddling his nightstick, and whistling “Yankee Doodle.” The prowler crawled under a parked car, and lay there until the happy cop passed.

Near by loomed the enormous bulk of the New York Concert Hall. From the stage door on the side street crept strains of a music so beautiful that each note seemed to grasp the heart with exquisite fingers.

It was a Stradivarius violin, one of the most perfect in the world, and had cost the player sixty thousand dollars.

The player was a blind man!

He was Victor Vail. Many music lovers maintained him to be the greatest living master of the violin. He ordinarily got hundreds of dollars for rendering an hour of violin music before an audience. To-night he played for charity, and got nothing.

The flat-chested man, cowering and fearful, knew little of Victor Vail. He only knew the music affected him strangely. Once it made him think of how his poor mother had sobbed that first time he went to jail, long years ago. He nearly burst into tears.

Then he got hold of his emotions.

Soon afterward, a taxi wheeled into the side street. It looked like any other New York taxi. But the driver had his coat collar turned up, and his cap yanked low. Little of his face could be seen.

The cab halted. The small man scuttled out to it.

“All set,” replied the cab driver. He had a very coarse voice. It was as though a hoarse bullfrog sat in the taxi. “Go ahead with your part, matey.”

“Don’t worry about that end of it!” snarled the driver. “We’re handlin’ that. Keelhaul me, if we ain’t!”

A thumping growl came out of the cab.

“Pipe down! You’ve already shipped with this crew, matey! Lay to an’ do your bit of the dirty work!”

Now that the man in the taxi spoke excitedly, one thing about his speech was even more noticeable. He had been a seafaring man in the past! His speech was sprinkled with sailor lingo.

The small man shuffled away from the cab. He entered the stage door of the concert auditorium.

Victor Vail had finished his violin playing. The audience was applauding. The hand-clapping was tremendous. It sounded like the roar of Niagara, transferred to the vast hall.

The flat-chested man loitered backstage. Applause from the delighted audience continued many minutes. It irked the man.

After a time, Victor Vail came to his dressing room. The blind maestro was surrounded by a worshipful group of great singers and musicians.

But the loitering man shouldered through them. His shoving hands, none too clean, soiled the costly gowns of operatic prima donnas, but he didn’t care.

“Victor Vail!” he called loudly. “I got a message for yer from Ben O’Gard!”

The name of Ben O’Gard had a marked effect on Victor Vail. He brought up sharply. A smile lighted his artistic features.

Victor Vail was tall, distinguished. He had hair as white as cotton, and almost as fine. His formal dress was immaculate.

His eyes did not seem like a blind man’s–until an observer noticed it made no difference to Victor Vail whether they were open or shut.

“Yes!” he cried delightedly. “What is the message from Ben O’Gard?”

The intruder eyed the persons near by.

“Then you shall speak to me alone.” Victor Vail waved his admirers back. He led the way to his dressing room, only a hand thrust out before him showing he was blind.

The flat-chested man entered first. Victor Vail followed, closing the door. He stood with his back to the panel a moment. His thoughts seemed delving into his past.

“Ben O’Gard!” he murmured reverently. “I have not heard that name for fifteen years! I have often sought to find him. I owe my life to Ben O’Gard. And now that worldly success has come to me, I should like to show my gratitude to my benefactor. Tell me, where is Ben O’Gard?”

“In de street outside,” said the flat-chested man, trembling a little. “He wants ter chin with yer.”

“Ben O’Gard is outside! And he wishes to talk to me!” Victor Vail whipped the dressing-room door open. “Take me to my friend! Quickly!”

The dirty man guided the blind master of the violin to the stage door.

Just before he reached the door, something happened which made the guide feel as if a bucket of ice water had been poured on him.

He saw the bronze man!