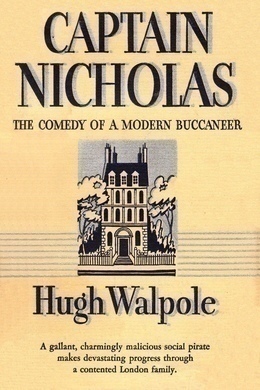 The story about a evil brother who comes back to his family for a visit and the devastation he reaps on his contented London family. This novel is a study of human conflict within a conventional family of the 1930’s, tested by the invasion of ideas in the person of the family’s black sheep, Captain Nicholas. A sequel to The Green Mirror, the character of Captain Nicholas is the most original of all Walpole’s creation.

‘What a beautiful evening!’ Fanny Carlisle said to the little lady who was standing beside her.

It was one of her impetuous moments and, as was always the case, she instantly regretted her impetuosity. How odd the lady must think her, speaking to her thus in the middle of Bordon’s, without any reason at all!

And yet she did not appear to mind.

The room where the glass was had a beautifully remote air, and from the large window the late afternoon sun streamed in upon the glass, transmuting it, transforming the ruby and orange and blue into glittering, trembling flames of colour. The tall glasses, the round bowls, the tumblers twinkled, shone and sparkled. They almost, if you were very romantic, appeared themselves to glory in the sun, which, perhaps, did not too often caress them. It was clever of Mr. Bordon to place the glass near the window and leave the rest of the room to the china. He had known that there would be these sunny days; he had even, Fanny Carlisle considered, arranged the large thin vases and the faint blue bowls on the highest points of vantage, for their hunger for light must be passionate….

‘It must be lovely for them–a sunny day,’ she said.

But the little lady could not follow her so far.

‘It’s too tiresome. My maid broke a blue bowl yesterday that my husband gave me five Christmases ago. I was greatly attached to it. My husband’s away, you know, in Scotland, and I want to replace it before he returns. In fact I MUST replace it. He notices things. I felt SURE that Bordon would have one like it. The man’s gone to enquire, but I could see from his face–’ She broke off to look again at the blue bowls. Poor things! They had been so happy in the sun and now they were worthless, valueless, might all be smashed into atoms and the little lady would not care.

‘I was so certain that Bordon … ‘ she murmured.

‘What about this one?’ Fanny asked, pointing to a pale blue bowl so thin and delicate that a breath would blow it like a bubble into the sky.

‘Oh no!’ said the little lady, quite crossly. ‘That isn’t in the least like it,’ and she looked at Fanny Carlisle as though it was most stupid of her not to have known.

‘She’s irritated by my height,’ Fanny thought. This often occurred to her when she was with strangers. She was tall and broad, felt herself to be clumsier than she really was, and this was because so often in her childhood she had heard the words: ‘Now, Fanny, DO be careful! You’ll knock that chair over!’ or ‘Fanny–mind the table. Look where you are going!’

But the little lady was pleased with what she saw. She liked this tall straight woman with the dark hair and the kindly humorous face. She was not smart, but most certainly a lady–not one of these modern know-all women who gave themselves airs and thought they knew everything, although Heaven alone could tell whence they came–for the little lady was something of a snob and as sensitive on occasion about her small stature as Fanny was of her height.

‘He’s a long time,’ she complained. ‘And I know it’s all no use. It’s so very irritating when they go off saying, “I’ll see what we can do, Madam,” when you know that THEY know that there’s nothing to be done at all.’

‘Well, I don’t think that I can wait,’ Fanny said cheerfully. ‘I promised to be back by five and it’s half-past four now. My boy’s at Westminster and he likes me to be there at tea-time.’

‘Oh, you have a boy at Westminster, have you? My husband’s brother went to Westminster. How small the world is!’

‘Yes, we’re a large family,’ Fanny said, smiling, impetuous again. ‘There are eight of us altogether!’

‘Eight!’ said the little lady. ‘Dear me! In these days! That does seem a lot!’

‘Yes–there’s my mother-in-law, my husband, my sister, my brother, and I have two boys and a girl.’

‘And you all live together, always?’

‘Yes, we’re a very attached family. At least I suppose we are. We all get along very well together.’

‘That’s not at all the modern idea.’

‘No. I suppose it isn’t. But I think we’d all be very sorry if the family was broken up. I always think it so odd in the newspapers and novels when they say that family life doesn’t exist any more. But of course they have to write about SOMETHING.’

But the little lady shook her head. ‘Your case is very exceptional,’ she said. ‘All living together, I mean. Of course relations visit one another and so on, but staying in the same house … ! Don’t you quarrel frightfully?’

‘No. Why should we? Of course we don’t always agree, but that makes things more interesting.’

‘Well, I should be afraid if I were you. It’s too good to last.’