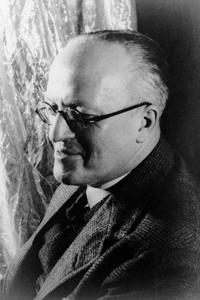 Sir Hugh Seymour Walpole, CBE was a New Zealand–born English novelist. His skill at scene-setting, vivid plots, and high profile as a lecturer brought him a large readership in the United Kingdom and North America. He was a best-selling author in the 1920s and 1930s, but has been largely neglected since his death. After his first novel, The Wooden Horse, Walpole wrote prolifically, producing at least one book every year. He was a spontaneous story-teller, writing quickly to get all his ideas on paper, seldom revising. His first novel to achieve real success was his third, Mr Perrin and Mr Traill, a tragicomic story of a fatal clash between two schoolmasters. Walpole’s output was large and varied. He wrote thirty-six novels, five volumes of short stories, two original plays and three volumes of memoirs. His range included disturbing studies of the macabre, children’s stories and historical fiction, most notably his Herries Chronicle series, set in the Lake District. He worked in Hollywood writing scenarios for two Metro-Goldwyn-Mayer films in the 1930s, and played a cameo in the 1935 version of David Copperfield.

Huge Walpole’s thrilling adventure novel of the 1920s revolves around Piccadily Circus. Richard Gunn is an ex-soldier in trouble after the end of the Gr...read more »

My homeward course led up a long ascent, Where the road’s watery surface, to the top Of that sharp rising, glittered to the moon And bore the semblance ...read more »

The story about a evil brother who comes back to his family for a visit and the devastation he reaps on his contented London family. This novel is a stu...read more »

Orphaned teenager Nathalie Frost is on her way to London to stay with her mother’s sister, Aunt Ruth, and Ruth’s famous husband, the celebrated popular ...read more »

A classic Unworldly Story, that has been captivating audiences for generations. Harmer John, after studying art in Italy, has devised a plan to combine ...read more »

Jeremy and Hamlet is the second book in the Jeremy Trilogy published by Sir Hugh Walpole. Published to critical acclaim across the world, it quickly bec...read more »

Walpole wrote horror novels that tended more towards the psychological rather than supernatural, with a brooding underlying mysticism. Among his importa...read more »

Walpole, as the biographer of the life of John Cornelius, wrote a long, first person narrative of the life of a genius who could never bring his world o...read more »

Set partly in Revolutionary Paris, and partly in romantic Cumbria, Judith Paris is the story of the two very different men who love Walpole’s most delig...read more »

Her name was Katherine Christian–but many called her the Devil’s own handmaiden. Born of a proud English beauty and a roving gypsy, she was mistress to ...read more »

Wilbraham was obviously a sentimentalist and an enthusiast; there was the extraordinary case shortly after I first met him of his championship of X., a ...read more »

This is Hugh Walpole’s most venturesome, most exciting romance. Down to the town of Treliss on the Cornish coast came Harkness, a your American of Purit...read more »

Described on its first publication by John Buchan as the finest English novel since Jude the Obscure, Rogue Herries tells the story of the larger than l...read more »

The Blind Man’s House is Walpole’s last book before his death. A psychological study of a village and the people who come into contact with a blind man ...read more »

This fifth novel in the Herries Chronicle, set against the background of the turmoil and politics of Elizabethan England, tells the tale of one family’s...read more »

It had been the wish of her whole life to flee from all the Herries, but Walter Herries had challenged her, and she had taken up the challenge’. Judith ...read more »

A novel of Spring and Fall, of old love and young, of London and an ancient house about to die. When Fred Delaney wished his lodger, Patrick Munden, rev...read more »

As boys, Jimmie Tunstall was John Talbot’s implacable foe, never ceasing to taunt, torment, and bully him. Years later, John is married and living in a ...read more »

In an old rickety building on the rock above an old grass-grown square in the city of Polchester live three old ladies. The house was a windy, creaky, r...read more »

A story of two friends with quite different temperaments, in which one hates the other, though keeps it very well hidden. The story ends badly for both ...read more »

The fourth and final volume of the Herries Chronicles is a love story of ‘effortless brilliance’ which starts with the triumph of Judith Paris’s hundred...read more »