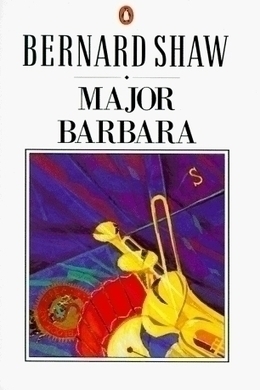 When a Salvation Army officer learns that her father, a wealthy armaments manufacturer, has donated lots of money to her organization, she resigns in disgust but eventually sees the truth of her father’s reasoning that social iniquity derives from poverty; it is only through accumulating wealth and power that people can help each other.

It is after dinner on a January night, in the library in Lady Britomart Undershaft’s house in Wilton Crescent. A large and comfortable settee is in the middle of the room, upholstered in dark leather. A person sitting on it [it is vacant at present] would have, on his right, Lady Britomart’s writing table, with the lady herself busy at it; a smaller writing table behind him on his left; the door behind him on Lady Britomart’s side; and a window with a window seat directly on his left. Near the window is an armchair.

Lady Britomart is a woman of fifty or thereabouts, well dressed and yet careless of her dress, well bred and quite reckless of her breeding, well mannered and yet appallingly outspoken and indifferent to the opinion of her interlocutory, amiable and yet peremptory, arbitrary, and high-tempered to the last bearable degree, and withal a very typical managing matron of the upper class, treated as a naughty child until she grew into a scolding mother, and finally settling down with plenty of practical ability and worldly experience, limited in the oddest way with domestic and class limitations, conceiving the universe exactly as if it were a large house in Wilton Crescent, though handling her corner of it very effectively on that assumption, and being quite enlightened and liberal as to the books in the library, the pictures on the walls, the music in the portfolios, and the articles in the papers.

Her son, Stephen, comes in. He is a gravely correct young man under 25, taking himself very seriously, but still in some awe of his mother, from childish habit and bachelor shyness rather than from any weakness of character.

Stephen submissively walks to the settee and sits down. He takes up The Speaker.

LADY BRITOMART. Don’t begin to read, Stephen. I shall require all your attention.

STEPHEN. It was only while I was waiting–

LADY BRITOMART. Don’t make excuses, Stephen. [He puts down The Speaker]. Now! [She finishes her writing; rises; and comes to the settee]. I have not kept you waiting very long, I think.

STEPHEN. Not at all, mother.

LADY BRITOMART. Bring me my cushion. [He takes the cushion from the chair at the desk and arranges it for her as she sits down on the settee]. Sit down. [He sits down and fingers his tie nervously]. Don’t fiddle with your tie, Stephen: there is nothing the matter with it.

STEPHEN. I beg your pardon. [He fiddles with his watch chain instead].

LADY BRITOMART. Now are you attending to me, Stephen?

LADY BRITOMART. No: it’s not of course. I want something much more than your everyday matter-of-course attention. I am going to speak to you very seriously, Stephen. I wish you would let that chain alone.

STEPHEN [hastily relinquishing the chain] Have I done anything to annoy you, mother? If so, it was quite unintentional.

LADY BRITOMART [astonished] Nonsense! [With some remorse] My poor boy, did you think I was angry with you?

STEPHEN. What is it, then, mother? You are making me very uneasy.

LADY BRITOMART [squaring herself at him rather aggressively] Stephen: may I ask how soon you intend to realize that you are a grown-up man, and that I am only a woman?

STEPHEN [amazed] Only a–

LADY BRITOMART. Don’t repeat my words, please: It is a most aggravating habit. You must learn to face life seriously, Stephen. I really cannot bear the whole burden of our family affairs any longer. You must advise me: you must assume the responsibility.

LADY BRITOMART. Yes, you, of course. You were 24 last June. You’ve been at Harrow and Cambridge. You’ve been to India and Japan. You must know a lot of things now; unless you have wasted your time most scandalously. Well, advise me.

LADY BRITOMART. No: I should think not. I don’t want you to order the dinner.

STEPHEN. I mean in our family affairs.

LADY BRITOMART. Well, you must interfere now; for they are getting quite beyond me.

STEPHEN [troubled] I have thought sometimes that perhaps I ought; but really, mother, I know so little about them; and what I do know is so painful–it is so impossible to mention some things to you–[he stops, ashamed].

LADY BRITOMART. I suppose you mean your father.

LADY BRITOMART. My dear: we can’t go on all our lives not mentioning him. Of course you were quite right not to open the subject until I asked you to; but you are old enough now to be taken into my confidence, and to help me to deal with him about the girls.

STEPHEN. But the girls are all right. They are engaged.

LADY BRITOMART [complacently] Yes: I have made a very good match for Sarah. Charles Lomax will be a millionaire at 35. But that is ten years ahead; and in the meantime his trustees cannot under the terms of his father’s will allow him more than 800 pounds a year.