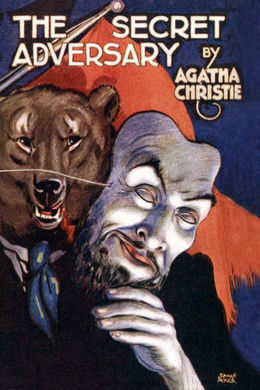 Full of energy and short of funds, old chums Tommy Beresford and Tuppence Cowley decide to form the “Young Adventurers,” and advertise themselves as willing to “go anywhere and do anything.” Asked by a British Intelligence official to find a woman named Jane Finn, who disappeared with sensitive government documents, they soon find that their whimsical idea has drawn them into a complicated web of intrigue, intelligence agents, dubious identities, missing government papers, false clues - and all-too-real danger.

The two young people greeted each other affectionately, and momentarily blocked the Dover Street Tube exit in doing so. The adjective “old” was misleading. Their united ages would certainly not have totalled forty-five.

“Not seen you for simply centuries,” continued the young man. “Where are you off to? Come and chew a bun with me. We’re getting a bit unpopular here–blocking the gangway as it were. Let’s get out of it.”

The girl assenting, they started walking down Dover Street towards Piccadilly.

The very faint anxiety which underlay his tone did not escape the astute ears of Miss Prudence Cowley, known to her intimate friends for some mysterious reason as “Tuppence.” She pounced at once.

“Not a bit of it,” declared Tommy unconvincingly. “Rolling in cash.”

“You always were a shocking liar,” said Tuppence severely, “though you did once persuade Sister Greenbank that the doctor had ordered you beer as a tonic, but forgotten to write it on the chart. Do you remember?”

“I should think I did! Wasn’t the old cat in a rage when she found out? Not that she was a bad sort really, old Mother Greenbank! Good old hospital–demobbed like everything else, I suppose?”

“No, old thing, not in riotous dissipation. No such luck! The cost of living–ordinary plain, or garden living nowadays is, I assure you, if you do not know—-“

“My dear child,” interrupted Tuppence, “there is nothing I do NOT know about the cost of living. Here we are at Lyons’, and we will each of us pay for our own. That’s it!” And Tuppence led the way upstairs.

The place was full, and they wandered about looking for a table, catching odds and ends of conversation as they did so.

“And–do you know, she sat down and CRIED when I told her she couldn’t have the flat after all.” “It was simply a BARGAIN, my dear! Just like the one Mabel Lewis brought from Paris—-“

“Funny scraps one does overhear,” murmured Tommy. “I passed two Johnnies in the street to-day talking about some one called Jane Finn. Did you ever hear such a name?”

But at that moment two elderly ladies rose and collected parcels, and Tuppence deftly ensconced herself in one of the vacant seats.

“And mind the tea comes in separate teapots,” she added severely.

Tommy sat down opposite her. His bared head revealed a shock of exquisitely slicked-back red hair. His face was pleasantly ugly–nondescript, yet unmistakably the face of a gentleman and a sportsman. His brown suit was well cut, but perilously near the end of its tether.

They were an essentially modern-looking couple as they sat there. Tuppence had no claim to beauty, but there was character and charm in the elfin lines of her little face, with its determined chin and large, wide-apart grey eyes that looked mistily out from under straight, black brows. She wore a small bright green toque over her black bobbed hair, and her extremely short and rather shabby skirt revealed a pair of uncommonly dainty ankles. Her appearance presented a valiant attempt at smartness.

The tea came at last, and Tuppence, rousing herself from a fit of meditation, poured it out.

“Now then,” said Tommy, taking a large bite of bun, “let’s get up-to-date. Remember, I haven’t seen you since that time in hospital in 1916.”

“Very well.” Tuppence helped herself liberally to buttered toast. “Abridged biography of Miss Prudence Cowley, fifth daughter of Archdeacon Cowley of Little Missendell, Suffolk. Miss Cowley left the delights (and drudgeries) of her home life early in the war and came up to London, where she entered an officers’ hospital. First month: Washed up six hundred and forty-eight plates every day. Second month: Promoted to drying aforesaid plates. Third month: Promoted to peeling potatoes. Fourth month: Promoted to cutting bread and butter. Fifth month: Promoted one floor up to duties of wardmaid with mop and pail. Sixth month: Promoted to waiting at table. Seventh month: Pleasing appearance and nice manners so striking that am promoted to waiting on the Sisters! Eighth month: Slight check in career. Sister Bond ate Sister Westhaven’s egg! Grand row! Wardmaid clearly to blame! Inattention in such important matters cannot be too highly censured. Mop and pail again! How are the mighty fallen!