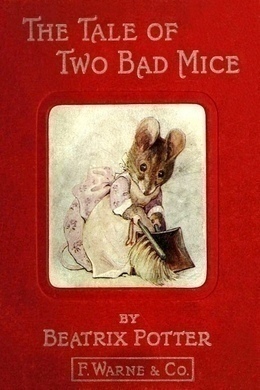 The Tale of Two Bad Mice

A doll’s house is the delightful setting for this most hilarious tale.One day, when the house is empty, those two bad mice, Tom Thumb and his wife, Hunca Munca, make themselves at home, only to find that the delicious looking ham that they were planning to devour is made of plaster, and the fish is glued to the plate! How they deal with this unexpected situation, and what happens when the house’s occupants unexpectedly return, make for a surprising ending.

Once upon a time there was a very beautiful doll’s-house; it was red brick with white windows, and it had real muslin curtains and a front door and a chimney.

IT belonged to two Dolls called Lucinda and Jane; at least it belonged to Lucinda, but she never ordered meals.

Jane was the Cook; but she never did any cooking, because the dinner had been bought ready-made, in a box full of shavings.

THERE were two red lobsters and a ham, a fish, a pudding, and some pears and oranges.

They would not come off the plates, but they were extremely beautiful.

ONE morning Lucinda and Jane had gone out for a drive in the doll’s perambulator. There was no one in the nursery, and it was very quiet. Presently there was a little scuffling, scratching noise in a corner near the fire-place, where there was a hole under the skirting-board.

Tom Thumb put out his head for a moment, and then popped it in again.

Tom Thumb was a mouse.

A MINUTE afterwards, Hunca Munca, his wife, put her head out, too; and when she saw that there was no one in the nursery, she ventured out on the oilcloth under the coal-box.

THE doll’s-house stood at the other side of the fire-place. Tom Thumb and Hunca Munca went cautiously across the hearthrug. They pushed the front door–it was not fast.

TOM THUMB and Hunca Munca went upstairs and peeped into the dining-room. Then they squeaked with joy!

Such a lovely dinner was laid out upon the table! There were tin spoons, and lead knives and forks, and two dolly-chairs–all so convenient!

TOM THUMB set to work at once to carve the ham. It was a beautiful shiny yellow, streaked with red.

The knife crumpled up and hurt him; he put his finger in his mouth.

“It is not boiled enough; it is hard. You have a try, Hunca Munca.”

HUNCA MUNCA stood up in her chair, and chopped at the ham with another lead knife.

“It’s as hard as the hams at the cheesemonger’s,” said Hunca Munca.