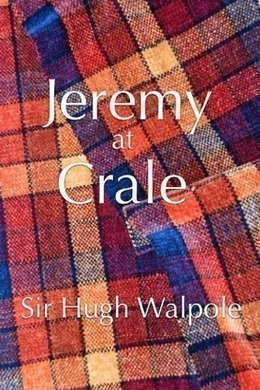 His Friends, His Ambitions and His One Great Enemy

Walpole wrote horror novels that tended more towards the psychological rather than supernatural, with a brooding underlying mysticism. Among his important novels is the semi autobiographical series that includes Jeremy, Jeremy and Hamlet, and this volume, Jeremy at Crale. Jeremy at Crale is the third coming of age story published by Sir Hugh Walpole. Published to critical acclaim across the world, it quickly became a bestseller.

So, at last, was one of his deepest ambitions realized.

It was not, when you looked at it, a very large room. If, as was the way with many of the other Studies, it had had a table in the middle of it, there would have been precious little space in which to move. But he and Gauntlet Ma, almost at once after their arrival last night, had come to an agreement about this. They would have their own tables in their own corners, leaving the middle of the room free–and Marlowe could lump it.

Ma Bender had found two small (and exceedingly dirty) tables, and the only thing that remained was to toss for the window. They had tossed and Cole had won. Marlowe, of course, had the dark corner near the door.

Young Jeremy Cole didn’t dare to think what his feelings would have been had he lost that toss. He wanted that window terribly–nobody in the world would ever know how badly–and for once in a way he had been successful. “For once in a way,” because he always lost the toss at everything.

He was alone in the room at last (he had hurried here directly after Third School) and his intention was to arrange his table before anyone came in. He saw that Gauntlet had already arranged HIS, that from somewhere or another he had procured a dark blue cloth and a smart-looking writing-case.

Then, turning with a shock of surprise, he discovered that that young pip-squeak Marlowe had arranged HIS–and what an arrangement! There, in between the door and the farther corner, exactly fitting into its space, was one of those old writing bureaux, Eighteenth Century or something, with little drawers and twisted brass handles and of a dark, shiny colour that even Jeremy, who knew nothing whatever about furniture, recognized as handsome. Moreover, above this remarkable piece of furniture was a small, dark bookcase with a glass front, and inside this were books with shining and gleaming faces.

On the top of the bureau was a leather frame that contained the portrait of a thin, severe, military-looking gentleman; there was also a strange, brass figure of a squatting, malevolent-looking image–Chinese or Hindu, something Eastern.

All that Jeremy could say was “Gosh!”

When had young Marlowe produced these things? They weren’t there last night. What side! If young Marlowe thought that this kind of swank …

But he turned, then, back to his own scratched and naked-seeming table. Large splashes of ink disfigured its surface. The few things that he had to arrange upon it–a dingy double frame containing his father and mother, a very faded green blotter, one of the school ink-wells and a photograph of the House Second XV of last season–how miserable these seemed!

He was aware of acute and poignant disappointment. And to think that he should be disappointed so soon when, during the whole of the preceding year, he had longed and longed for just this moment– when by simple right of brains, industry and personality he should be part owner of one of these Studies! And here he was, and it was dust-and-ashes in the mouth!

However, being Jeremy Cole, he very quickly recovered. What, after all, did it matter? It was all very well to make a show on the second day of the term, but what about the end of the first week? Everyone knew that you couldn’t, unless you were in the Sixth, or a Games Captain, and had fags and a whole Study to yourself, keep anything decent for more than a day or two. What would Marlowe’s old bureau look like after one or two rags? But were there to be any rags in here? He and Gauntlet had only last night sworn that there should not. They would keep the place decent and rag elsewhere…. Would they? He couldn’t be sure. He wasn’t even certain of himself. The very thought of young Marlowe’s “side” made him want to kick that bureau about.

However, there was always the window. Jeremy turned to it and sighed with contentment. To the ordinary observer it might not have seemed a marvellous view. On the right was the great, towering wall of Upper School and, lower down, jutting out of this, the Upper Fives Courts. In the middle distance was a square, rather dingy space known as Coulter’s Yard, and beyond Coulter’s the path that bordered the Upper Playing fields. On the left were the walls, red-bricked and creeper-covered, of Jeremy’s own House, Leeson’s.

It is true that beyond the “Upper Games” (these were scarcely visible because they shelved so swiftly downhill) were the tops of trees, and beyond the trees again you could imagine the sea, knowing as you did that it was inevitably and eternally there.

But, on the whole, not much for the ordinary observer. Everything, however, for Jeremy.