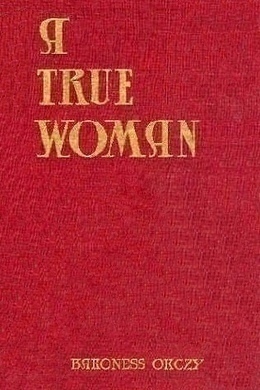 The Heart of a Woman

Luke de Mountford, heir to his uncle Lord Radcliffe, asks for Louise Harris’s hand in marriage. Just when everything seems to be going well, another nephew, Philip, turns up with a claim to his uncle’s fortune and Luke is forced to reveal to Louise that their financial future may not be as guaranteed as he had hoped. When Philip is discovered stabbed in a cab, suspicion naturally falls on Luke who certainly has a motive for murder. The head of the Criminal Investigation Department, who happens to be Louisa’s uncle, reveals his evidence before the ensuing trial and allows Colonel Harris to conceal himself in his office while a witness for the prosecution details the points of the evidence he will give at the trial. He also reveals that he intends to allow Luke time to escape should the verdict at the inquest be against him. (source: Wikipedia)

No! No! she was not going to gush!–Not even though there was nothing in the room at this moment to stand up afterward before her as dumb witness to a moment’s possible weakness. Less than nothing in fact: space might have spoken and recalled that moment … infinite nothingness might at some future time have brought back the memory of it … but these dumb, impassive objects! … the fountain pen between her fingers! The dull, uninteresting hotel furniture covered in red velvet–an uninviting red that repelled dreaminess and peace! The ormolu clock which had ceased long ago to mark the passage of time, wearied–as it no doubt was, poor thing–by the monotonous burden of a bronze Psyche gazing on her shiny brown charms, in an utterly blank and unreflective bronze mirror, while obviously bemoaning the fracture of one of her smooth bronze thighs! Indeed Louisa might well have given way to that overmastering feeling of excitement before all these things. They would neither see nor hear. They would never deride, for they could never remember.

But a wood fire crackled on the small hearth … and … and those citron-coloured carnations were favourite flowers of his … and his picture did stand on the top of that ugly little Louis Philippe bureau …No! No! it would never do to gush, for these things would see . . . and, though they might not remember, they would remind.

And Louisa counted herself one of the strong ones of this earth. Just think of her name. Have you ever known a Louisa who gushed? who called herself the happiest woman on earth? who thought of a man–just an ordinary man, mind you–as the best, the handsomest, the truest, the most perfect hero of romance that ever threw a radiance over the entire prosy world of the twentieth century?

Louisas, believe me, do no such things. The Mays and the Floras, the Lady Barbaras and Lady Edithas, look beatific and charming when, clasping their lily-white hands together and raising violet eyes to the patterned ceiling paper above them, they exclaim: “Oh, my hero and my king!”

But Louisas would only look ridiculous if they behaved like that … Louisa Harris, too! … Louisa, the eldest of three sisters, the daughter of a wealthy English gentleman with a fine estate in Kent, an assured position, no troubles, no cares, nothing in her life to make it sad, or sordid or interesting … Louisa Harris and romance! . . . Why, she was not even pretty. She had neither violet eyes nor hair of ruddy gold. The latter was brown and the former were gray. … How could romance come in the way of gray eyes, and of a girl named Louisa?

Can you conceive, for instance, one of those adorable detrimentals of low degree and empty pocket who have a way of arousing love in the hearts of the beautiful daughters of irascible millionaires, can you conceive such an interesting personage, I say, falling in love with Louisa Harris?

I confess that I cannot. To begin with, dear, kind Squire Harris was not altogether a millionaire, and not at all irascible, and penniless owners of romantic personalities were not on his visiting list.

Therefore Louisa, living a prosy life of luxury, got up every morning, ate a copious breakfast, walked out with the dogs, hunted in the autumn, skated in the winter, did the London season, and played tennis in the summer, just as hundreds and hundreds of other well-born, well-bred English girls of average means, average positions, average education, hunt, dance, and play tennis throughout the length and breadth of this country.

There was no room for romance in such a life, no time for it. … The life itself was so full already–so full of the humdrum of daily rounds, of common tasks, that the heart which beat with such ordinary regularity in the seemingly ordinary breast of a very ordinary girl did so all unconscious of the intense pathos which underlay this very ordinary existence.

Vaguely Louisa knew that somewhere, beyond even the land of dreams, there lay, all unknown, all mysterious, a glorious world of romance: a universe peopled by girlish imaginings, and the sensitive, creating thoughts of poets, by the galloping phantasies of super-excited brains, and the vague longings of ambitious souls: a universe wherein dwelt alike the memories of those who have loved and the hopes of those who suffer. But when she thought of it all, she did so as one who from the arid plain gazes on the cool streams and golden minarets which the fairy Fata Morgana conjures on the horizon far away. She looked on it as all unreal and altogether beyond her ken. She shut her eyes to the beautiful mirage, her heart against its childish yearnings.