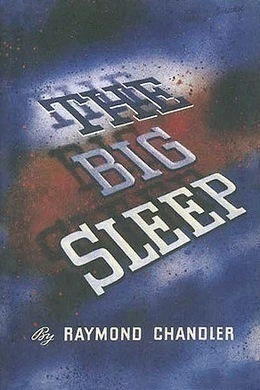 The Big Sleep introduces one of the finest crime detectives in literary history, Philip Marlowe. When a dying millionaire hires Philip Marlowe to handle the blackmailer of one of his two troublesome daughters, Marlowe finds himself involved with more than extortion. Kidnapping, pornography, seduction, and murder are just a few of the complications he gets caught up in.

It was about eleven o’clock in the morning, mid October, with the sun not shining and a look of hard wet rain in the clearness of the foothills. I was wearing my powder-blue suit, with dark blue shirt, tie and display handkerchief, black brogues, black wool socks with dark blue clocks on them. I was neat, clean, shaved and sober, and I didn’t care who knew it. I was everything the well-dressed private detective ought to be. I was calling on four million dollars.

The main hallway of the Sternwood place was two stories high. Over the entrance doors, which would have let in a troop of Indian elephants, there was a broad stained-glass panel showing a knight in dark armor rescuing a lady who was tied to a tree and didn’t have any clothes on but some very long and convenient hair. The knight had pushed the vizor of his helmet back to be sociable, and he was fiddling with the knots on the ropes that tied the lady to the tree and not getting anywhere. I stood there and thought that if I lived in the house, I would sooner or later have to climb up there and help him. He didn’t seem to be really trying.

There were French doors at the back of the hall, beyond them a wide sweep of emerald grass to a white garage, in front of which a slim dark young chauffeur in shiny black leggings was dusting a maroon Packard convertible. Beyond the garage were some decorative trees trimmed as carefully as poodle dogs. Beyond them a large greenhouse with a domed roof. Then more trees and beyond everything the solid, uneven, comfortable line of the foothills.

On the east side of the hall a free staircase, tile-paved, rose to a gallery with a wrought-iron railing and another piece of stained-glass romance. Large hard chairs with rounded red plush seats were backed into the vacant spaces of the wall round about. They didn’t look as if anybody had ever sat in them. In the middle of the west wall there was a big empty fireplace with a brass screen in four hinged panels, and over the fireplace a marble mantel with cupids at the corners. Above the mantel there was a large oil portrait, and above the portrait two bullet-torn or moth-eaten cavalry pennants crossed in a glass frame. The portrait was a stiffly posed job of an officer in full regimentals of about the time of the Mexican war. The officer had a neat black imperial, black mustachios, hot hard coal-black eyes, and the general look of a man it would pay to get along with. I thought this might be General Sternwood’s grandfather. It could hardly be the General himself, even though I had heard he was pretty far gone in years to have a couple of daughters still in the dangerous twenties.

I was still staring at the hot black eyes when a door opened far back under the stairs. It wasn’t the butler coming back. It was a girl.

She was twenty or so, small and delicately put together, but she looked durable. She wore pale blue slacks and they looked well on her. She walked as if she were floating. Her hair was a fine tawny wave cut much shorter than the current fashion of pageboy tresses curled in at the bottom. Her eyes were slate-gray, and had almost no expression when they looked at me. She came over near me and smiled with her mouth and she had little sharp predatory teeth, as white as fresh orange pith and as shiny as porcelain. They glistened between her thin too taut lips. Her face lacked color and didn’t look too healthy.

Her eyes rounded. She was puzzled. She was thinking. I could see, even on that short acquaintance, that thinking was always going to be a bother to her.

“That’s a funny name.” She bit her lip and turned her head a little and looked at me along her eyes. Then she lowered her lashes until they almost cuddled her cheeks and slowly raised them again, like a theater curtain. I was to get to know that trick. That was supposed to make me roll over on my back with all four paws in the air.

“Are you a prizefighter?” she asked, when I didn’t.

“A–a–” She tossed her head angrily, and the rich color of it glistened in the rather dim light of the big hall. “You’re making fun of me.”

“You didn’t say anything. You’re just a big tease.” She put a thumb up and bit it. It was a curiously shaped thumb, thin and narrow like an extra finger, with no curve in the first joint. She bit it and sucked it slowly, turning it around in her mouth like a baby with a comforter.