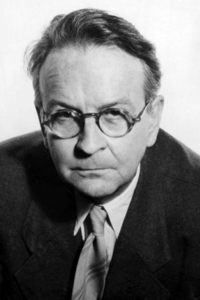 Raymond Thornton Chandler was a British-American novelist and screenwriter. At age forty-four, Raymond Chandler decided to become a detective fiction writer after losing his job as an oil company executive during the Depression. In addition to his short stories, Chandler published seven full novels during his lifetime, his first novel being The Big Sleep, and all but Playback have been made into motion pictures. Chandler had an immense stylistic influence on American popular literature, and is considered by many to be a founder, along with Dashiell Hammett, James M. Cain and other Black Mask writers, of the hard-boiled school of detective fiction. His protagonist, Philip Marlowe, along with Hammett’s Sam Spade, is considered by some to be synonymous with “private detective,” both having been played on screen by Humphrey Bogart, whom many considered to be the quintessential Marlowe.

Some of Chandler’s novels are considered important literary works, and three are often considered masterpieces: Farewell, My Lovely, The Little Sister, and The Long Goodbye, the latter being praised within an anthology of American crime stories as “arguably the first book since Hammett’s ‘The Glass Key’ … to qualify as a serious and significant mainstream novel that just happened to possess elements of mystery”.

This is one of Chandler’s most famous crime novels featuring the detective Philip Marlowe, who’s about to give up on a completely routine case when he f...read more »

The final complete novel by Raymond Chandler, featuring his iconic creation Philip Marlowe. Betty Mayfield is blond and beautiful and has just been foun...read more »

The Big Sleep introduces one of the finest crime detectives in literary history, Philip Marlowe. When a dying millionaire hires Philip Marlowe to handle...read more »

Philip Marlowe’s client, a dried-up husk of a woman, wants him to recover a rare gold coin called a Brasher Doubloon, missing from her late husband’s co...read more »

Derace Kingsley’s wife ran away to Mexico to get a quickie divorce and marry a Casanova-wannabe named Chris Lavery. Or so the note she left her husband ...read more »

When Philip Marlowe befriends down-on-his-luck veteran Terry Lennox he gets more than he bargained for. With Lennox’s wife dead and Lennox himself on th...read more »

Prefaced by the famous Atlantic Monthly essay of the same name, in which he argues the virtues of the hard-boiled detective novel, this collection mostl...read more »

Trouble is My Business is a collection of four riveting novellas from Raymond Chandler. In the first of the four cases LA PI Philip Marlowe is offered a...read more »