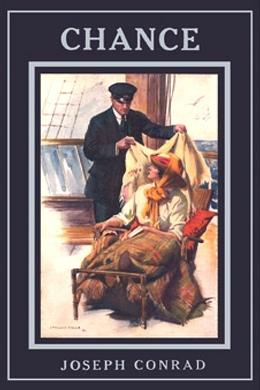 A Tale in Two Parts

Chance is narrated by Conrad’s regular narrator, Charles Marlow, but is characterised by a complex, nested narrative in which different narrators take up the story at different points and attempt to interpret various episodes in the life of Miss de Barral, the daughter of a convicted swindler named Smith de Barral (though this character is famous in the world of the novel as a criminal, he may, at least at first, have been merely an incompetent banker). Miss de Barral leads a sheltered life while her father is prosperous, then must rely on the generosity of others, who resent her or have agendas for her, before she escapes by marrying one Captain Anthony. Much of the book involves the musing of the various narrators over what she and the Captain expected from this union, and what they actually got from it. When her father is released from prison, he joins them on ship, and the book heads towards its denouement (source: Wikipedia)

I believe he had seen us out of the window coming off to dine in the dinghy of a fourteen-ton yawl belonging to Marlow my host and skipper. We helped the boy we had with us to haul the boat up on the landing-stage before we went up to the riverside inn, where we found our new acquaintance eating his dinner in dignified loneliness at the head of a long table, white and inhospitable like a snow bank.

The red tint of his clear-cut face with trim short black whiskers under a cap of curly iron-grey hair was the only warm spot in the dinginess of that room cooled by the cheerless tablecloth. We knew him already by sight as the owner of a little five-ton cutter, which he sailed alone apparently, a fellow yachtsman in the unpretending band of fanatics who cruise at the mouth of the Thames. But the first time he addressed the waiter sharply as ‘steward’ we knew him at once for a sailor as well as a yachtsman.

Presently he had occasion to reprove that same waiter for the slovenly manner in which the dinner was served. He did it with considerable energy and then turned to us.

“If we at sea,” he declared, “went about our work as people ashore high and low go about theirs we should never make a living. No one would employ us. And moreover no ship navigated and sailed in the happy-go- lucky manner people conduct their business on shore would ever arrive into port.”

Since he had retired from the sea he had been astonished to discover that the educated people were not much better than the others. No one seemed to take any proper pride in his work: from plumbers who were simply thieves to, say, newspaper men (he seemed to think them a specially intellectual class) who never by any chance gave a correct version of the simplest affair. This universal inefficiency of what he called “the shore gang” he ascribed in general to the want of responsibility and to a sense of security.

“They see,” he went on, “that no matter what they do this tight little island won’t turn turtle with them or spring a leak and go to the bottom with their wives and children.”

From this point the conversation took a special turn relating exclusively to sea-life. On that subject he got quickly in touch with Marlow who in his time had followed the sea. They kept up a lively exchange of reminiscences while I listened. They agreed that the happiest time in their lives was as youngsters in good ships, with no care in the world but not to lose a watch below when at sea and not a moment’s time in going ashore after work hours when in harbour. They agreed also as to the proudest moment they had known in that calling which is never embraced on rational and practical grounds, because of the glamour of its romantic associations. It was the moment when they had passed successfully their first examination and left the seamanship Examiner with the little precious slip of blue paper in their hands.

“That day I wouldn’t have called the Queen my cousin,” declared our new acquaintance enthusiastically.

At that time the Marine Board examinations took place at the St. Katherine’s Dock House on Tower Hill, and he informed us that he had a special affection for the view of that historic locality, with the Gardens to the left, the front of the Mint to the right, the miserable tumble-down little houses farther away, a cabstand, boot-blacks squatting on the edge of the pavement and a pair of big policemen gazing with an air of superiority at the doors of the Black Horse public-house across the road. This was the part of the world, he said, his eyes first took notice of, on the finest day of his life. He had emerged from the main entrance of St. Katherine’s Dock House a full-fledged second mate after the hottest time of his life with Captain R-, the most dreaded of the three seamanship Examiners who at the time were responsible for the merchant service officers qualifying in the Port of London.

“We all who were preparing to pass,” he said, “used to shake in our shoes at the idea of going before him. He kept me for an hour and a half in the torture chamber and behaved as though he hated me. He kept his eyes shaded with one of his hands. Suddenly he let it drop saying, “You will do!” Before I realised what he meant he was pushing the blue slip across the table. I jumped up as if my chair had caught fire.

“Thank you, sir,” says I, grabbing the paper.

“Good morning, good luck to you,” he growls at me.

“The old doorkeeper fussed out of the cloak-room with my hat. They always do. But he looked very hard at me before he ventured to ask in a sort of timid whisper: “Got through all right, sir?” For all answer I dropped a half-crown into his soft broad palm. “Well,” says he with a sudden grin from ear to ear, “I never knew him keep any of you gentlemen so long. He failed two second mates this morning before your turn came. Less than twenty minutes each: that’s about his usual time.”