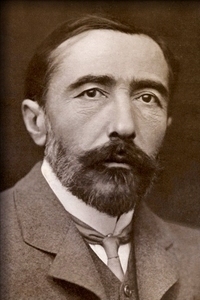 Joseph Conrad was a Polish-born novelist who spent most of his adult life in Britain. He is regarded as one of the greatest English novelists, which is even more notable because he did not learn to speak English well until he was in his 20s. Conrad is recognized as a master prose stylist. Some of his works have a strain of romanticism, but more importantly he is recognized as an important forerunner of Modernist literature. Writing during the apogee of the British Empire, Conrad drew upon his experiences in the British Merchant Navy. In 1894, at the age of 36, he left the sea to become an English author. His first novel, Almayer’s Folly, set on the east coast of Borneo and was published in 1895.

Lush prose and penetrating psychological insight infuse Conrad’s first novel with the qualities that have made him one of the most popular and most stud...read more »

Certain individualities grow into fame through their vices and their virtues, or simply by their actions, which may have a temporary importance; and the...read more »

Chance is narrated by Conrad’s regular narrator, Charles Marlow, but is characterised by a complex, nested narrative in which different narrators take u...read more »

In Conrad’s haunting tale, Marlow, a seaman and wanderer, recounts his physical and psychological journey in search of the enigmatic Kurtz. Travelling t...read more »

A hundred years ago a seaman’s life was full of danger, but Jim, the first mate on board the Patna, is not afraid of danger. He is young, strong, confid...read more »

A gripping tale of capitalist exploitation and rebellion, set amid the mist-shrouded mountains of a fictional South American republic, employs flashback...read more »

Conrad’s unfinished novel that he was working on before his death in 1924, in which he returns to one of his favorite subjects: the French Revolution. U...read more »

Although Joseph Conrad achieved acclaim as one of the masters of English-language fiction, his own life story is as fascinating and engaging as Heart of...read more »

A triangle of conspiracy is built, then destroyed, by the self-interest of its participants. Mr. Verloc, employed by a foreign embassy to incriminate an...read more »

Conrad’s autobiographical novella of a young man in his first command as a sea captain. A series of crises prove incredibly difficult for his new author...read more »

Captain McWhirr is a serious man who runs his steamer, the Nan-Shan, with efficiency and solidity. When a storm appears to be headed in their direction,...read more »

Bomb-throwing assassins, political repression and revolt, emigre revolutionaries infiltrated by a government spy: much of Under Western Eyes is more top...read more »

Axel Heyst, a dreamer and a restless drifter, believes he can avoid suffering by cutting himself off from others. Then he becomes involved in the operat...read more »