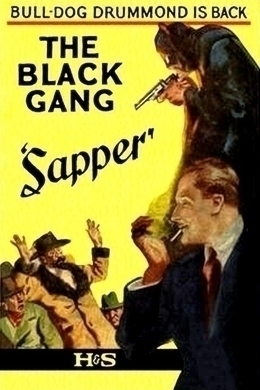 Although the First World War is over, it seems that the hostilities are not, and when Captain Hugh “Bulldog” Drummond discovers that a stint of bribery and blackmail is undermining England’s democratic tradition, he forms the Black Gang, bent on tracking down the perpetrators of such plots. They set a trap to lure the criminal mastermind behind these subversive attacks to England, and all is going according to plan until Bulldog Drummond accepts an invitation to tea at the Ritz with a charming American clergyman and his dowdy daughter.

The wind howled dismally round a house standing by itself almost on the shores of Barking Creek. It was the grey dusk of an early autumn day, and the occasional harsh cry of a sea-gull rising discordantly above the wind alone broke the silence of the flat, desolate waste.

The house seemed deserted. Every window was shuttered; the garden was uncared for and a mass of weeds; the gate leading on to the road, apparently feeling the need of a deficient top hinge, propped itself drunkenly on what once had been a flower-bed. A few gloomy trees swaying dismally in the wind surrounded the house and completed the picture—one that would have caused even the least imaginative of men to draw his coat a little tighter round him, and feel thankful that it was not his fate to live in such a place.

But then few people ever came near enough to the house to realise its sinister appearance. The road—it was little better than a cart track—which passed the gate, was out of the beaten way; only an occasional fisherman or farm labourer ever used it, and that generally by day when things assumed their proper proportion, and it was merely an empty house gradually falling to pieces through lack of attention. At night they avoided it if possible; folks did say that twelve years ago some prying explorer had found the bones of a skeleton lying on the floor in one of the upstair rooms with a mildewed rope fixed to one of the beams in the ceiling. And then it had been empty for twenty years.

Even now when the wind lay in the east or north-east and the tide was setting in, there were those who said that you could see a light shining through the cracks in the shutters in that room upstairs, and that, should a man climb up and look in, he’d see no skeleton, but a body with purple face and staring eyes swinging gently to and fro, and tied by the neck to a beam with a rope which showed no trace of mildew. Ridiculous, of course; but then so many of these local superstitions are. Useful, too, in some cases; they afford a privacy from the prying attentions of local gossips far more cheaply and effectively than high walls and bolts and bars.

So, at any rate, one of the two men who were walking briskly along the rough track seemed to think.

“Admirable,” he remarked, as he paused for a moment at the entrance of the weed-grown drive. “Quite admirable, my friend. A house situated as this one is, is an acquisition, and when it is haunted in addition it becomes a godsend.”

He spoke English perfectly with a slight foreign accent, and his companion nodded abruptly.

“From what I heard about it I thought it would do,” he answered. “Personally I think it’s a damnable spot, but since you were so set against coming to London, I had to find somewhere in this neighbourhood.”

The two men started to walk slowly up the drive. Branches dripping with moisture brushed across their faces, and involuntarily they both turned up the collars of their coats.

“I will explain my reasons in due course,” said the first speaker shortly. “You may take it from me that they were good. What’s that?”

He swung round with a little gasp, clutching his companion’s arm.

“Nothing,” cried the other irritably. For a moment or two they stood still, peering into the dark undergrowth. “What did you think it was?”

“I thought I heard a bush creaking as if—as if someone was moving,” he said, relaxing his grip. “It must have been the wind, I suppose.”

He still peered fearfully into the gloomy garden, until the other man dragged him roughly towards the house.

“Of course it was the wind,” he muttered angrily. “For heaven’s sake, Zaboleff, don’t get the jumps. If you will insist on coming to an infernal place like this to transact a little perfectly normal business you must expect a few strange noises and sounds. Let’s get indoors; the others should be here by now. It oughtn’t to take more than an hour, and you can be on board again long before dawn.”

The man who had been addressed as Zaboleff ceased looking over his shoulder, and followed the other through a broken-down lattice-gate to the rear of the house. They paused in front of the back door, and on it the leader knocked three times in a peculiar way. It was obviously a prearranged signal, for almost at once stealthy steps could be heard coming along the passage inside. The door was cautiously pulled back a few inches, and a man peered out, only to throw it open wide with a faint sigh of relief.

“Evening, Jim.” He stepped inside, followed by Zaboleff, and the door closed behind them. “Our friend’s boat was a little late. Is everyone here?”